Things are moving along now. The swelling on my knee will take a couple of months to subside but the pain has eased somewhat. I had a consultation with the surgeon on Tuesday who was pleased with my progress - especially as he recognised that I've been doing the physio properly (thanks to my young friend who's made sure I don't slack).
This picture shows the x-rays taken the other day. 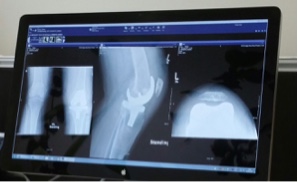 Quite a lot of metal implants. It should be fun going through the airport scanners. Today was the first day I've been allowed to drive since the operation 6 weeks ago so it was great to go out in the sunshine. Called in to have a cup of tea with Debbie (nice to follow her adventures with Nigel Havers on the current TV programme - Celebrity Carry on Barging), then to the picture framer where I ordered a frame for the current oil painting I'm doing, and a frame for this pencil drawing - finished last week - of my niece Louisa and her daughter Kate. I've finally found some really nice paper for pencil drawing. It's called Fabriano Artistico 300lb Hot Pressed. 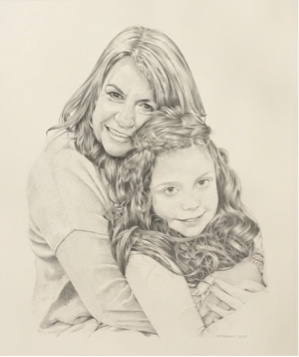 Our local cinema regularly shows operas and ballets live from the shows in London. On Tuesday evening 'Sleeping Beauty' was filmed directly from the Royal Opera House. Performed by members of the Royal Ballet it was a really splendid evening. What I like about these evenings is that Darcey Bussel introduces the performances and upon occasion interviews famous ballerinas, choreographers, and directors. On Tuesday we heard from a lady who was the principal ballerina in the 1948 production of Sleeping Beauty, also from the Royal Opera House. Being in the cinema it's always a bonus to be close up to the orchestra at times, and during the performances to be almost on the stage itself. 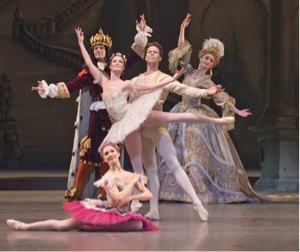 We saw a really great movie last week. Called 'Hidden Figures' it tells the true story of three very talented African-American women working at NASA in the early 60's (when segregation was still practised in the USA) These women were the brains behind one of the greatest operations in history - the launch of astronaut John Glenn into orbit. This is Octavia Spencer who played Dorothy Vaughan - the mathematical genius. 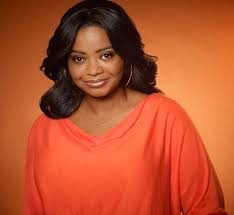 This visionary trio crossed all gender and race lines to inspire generations to dream big. At the end of the film they showed photographs of the original three women. A truly inspiring film. I urge you to see it.
Debbie invited my young friend and me, together with Donna, her sister, and Vince Hill to the Mill at Sonning last Saturday where we saw a fascinating murder mystery. Called 'Dead Simple' the twists and turns in the story were so good that none of us guessed who the murderer was. Highly recommended - it's on for another week - the refurbished bar is great. We met the cast afterwards for a nightcap.
On Sunday my neighbours hosted a brunch party for those of us who live next to or very near Marsh Lock to say goodbye to Nigel O'Connor - our lock keeper. Nigel will be sorely missed. He really knows how to organise all the different boats as they enter the lock. Nigel was presented with a pair of engraved tumblers and a large print of the painting of the SwanUppers at Marsh Lock. (He happens to be depicted twice on the painting). Everyone at the party signed the card.
Well, it's now back to the physio and the hydrotherapy (which I started yesterday in the pool at the leisure centre at Gillots School in Henley.