A couple of Saturday's ago I was very pleased to hear that my painting "Nine Gondolas" had been shortlisted for exhibition in the forthcoming Royal Society of Marine Artists at the Mall Galleries, so we drove to London with the painting. 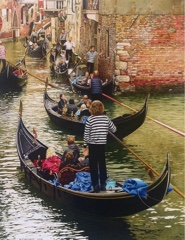 However on Tuesday I heard that it had not been selected for the exhibition. Never mind - I was quite surprised it had been initially selected as the vast majority of pictures hung in the RSMA exhibitions are seagoing paintings. While in London I called in the The National Portrait Gallery to see the finali 57 portraits that had been selected for hanging in the 'Portrait of the Year' competition. A really interesting variety of styles and subjects. Again my portrait for that exhibition reached the last 150 out of more than 2,000 entries but missed out in the final selection. Still, there's always next year. (A new oil portrait now completed and ready for submission in December). Cross fingers.
Having reached the semi-finals in the novices competition at the Henley Bowling Club, last Wednesday I played my match.   And what a close fought game it was. The winner is the first to score 21. We each bowl four woods at a time. After about six ends I was leading by about four points and went on to lead at 20 to 17. I only needed one point to win. But Terry, my opponent, scored three on his next bowl. So, after 18 ends we were level - 20/20. Three of my last four bowls came very close to the jack, but my last bowl knocked one of his closer. So he won. I felt like an Olympic athlete who came fourth by a fraction of a second. Another near miss.
Earlier this year my great niece, Kate, visited New York. The weather was well below zero. I loved the look on her face as she snuggled up in warm clothes against the cold. So I've just painted a miniature of her for exhibition in the forthcoming exhibition of the Royal Society of Miniature Painters.. 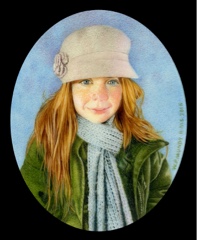 I call the miniature portrait 'Cold Kate'.
Ten days ago my young friend and I were invited to dinner by Sir John Madjeski at the Directors Lounge at the Madjeski Stadium in Reading to watch the football match that evening. Reading were playing Plymouth. Khunying Sasima Srivikorn, one of the new partners and owners of the Club was there too which was a big surprise for me. When I lived in Bangkok in the 60's Sasima was one of my clients when she owned the President Hotel. We hadn't met since then (although we had exchanged our autobiographies). Sir John sat me next to her in the front row of seats as we watched the match so we could have a good chat about the past. This was the view. 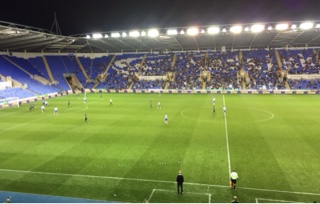 Reading won 2-0 so everyone was happy. Incidentally before we had dinner Sir John had arranged a dedicated car parking space for us as we were to meet him prior to the match in his penthouse next to the stadium. I'd recently painted an oil portrait of him so we took it to show him. 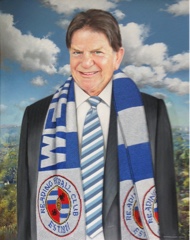 I painted him draped in the Wembley scarf which he worn when the team recently played at the Wembley Stadium in London. Later he took the painting to the Lounge to show the other directors and guests.
Last Saturday we took the train to London to see The Lion King at the Lyceum Theatre. 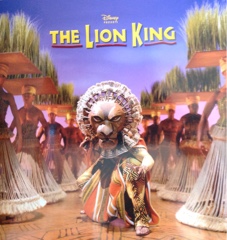 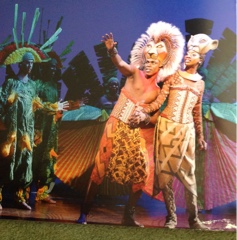 We had marvellous seats, 2 rows from the front in the stalls. Although the show has been running for nearly ten years it was magical. Especially at the beginning of the performance when enormous elephants, giraffes and other animals brushed past us as they made their way to the stage. I loved the way the puppetry almost made me believe they were real animals.
There are several miniature exhibitions taking place soon. I will be entering those in Washington, Florida and London. All my entries are now ready and will soon be despatched. A total of sixteen miniature portraits will be my total. Most have been painted this year. I'll show here just one for each exhibition -
Washington 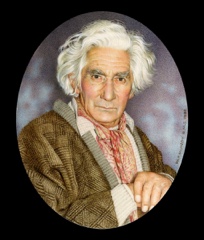 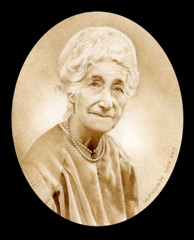 And this one of Paul Daniels for London 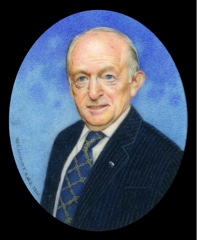 We took the boats out last week but unfortunately a large amount of weed has grown in the millpool so  it took a lot of manoevering to reach the main river. When I put the big boat into reverse the weed took it in the opposite direction. We didn't hit the bank but it was a near miss. We were on our way that evening to have a meal in the Orangery at Phyllis Court Club. It's so nice to be able to drive to dinner by boat. When we got back to my mooring the weeds were a bit of a problem but I managed to moor successfully without banging into the wall! And last Sunday it was easier to use the oars than negotiate through the weeds with the small electric motor.
Yesterday I had lunch with Mollie and her daughter Sarah at Phyllis Court. Mollie lives in New Zealand and is my second cousin. I was one hour late as I was stuck in an almighty traffic jam on the Wargrave Road due to the Rewind Music Festival being held down river on the Temple Island meadows. I had a text while in the queue from Mollie which said. "Don't worry Bill, I hear the traffic is ghastly so you may find us boozed when you get here".
Every year I give a sovereign attached to a beautifully calligraphed certificate as the prize for the best portrait at the RMS miniature show in London in October. This is an example 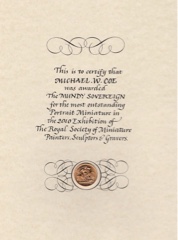 Sadly, Judy Fraser, who has done the calligraphy for many years, had a stroke last year, and although she can still write beautifully she's not able to compose the certificate properly. So I will have to do them myself in the future. Although my young friend bought me a beautifully boxed calligraphy set last birthday I'd asked for the dipping pens and ink bottles. I tried but couldn't manage to keep the ink from drying out of becoming inconsistent. Last week Judy advised me to buy nibs with a cartridge feed. Late on Thursday evening MYF used her Amazon Prime account to order me a new set. It arrived the following morning at 11am. I was very impressed. So, in about five minutes, when I've posted this blog, I'll spend a few hours practising calligraphy.