Warily wending our way through the Everglades

My young friend and I jetted off to The USA on Saturday for a fortnight's holiday. We had planned to spend the first week travelling around Florida, followed by a weekend in Dunedin to attend the Miniature Art Society of Florida's annual exhibition. Landing at Tampa airport we located the car hire desk and eventually picked up a nice white Nissan Versa. The night was dark and the rain poured down, and after a ten hour flight we were anxious to hopefully reach our hotel in Brandon in less than an hour. It was not to be, as the satnav just refused to work. We thought it was because we were mainly underground trying to find our way out of the airport, but soon we were on a two mile long causeway. No idea where we were. Eventually, after early 30 minutes the satnav woke up and we found we were heading in exactly the wrong direction! But we finally arrived at the hotel - where I must admit I mistook the microwave for the safe! Luckily I discovered my error in time or my passport and dollar bills would have been nice and truly cooked to a frazzle!
Next morning we started on our journey to the Everglades, stopping off at Venice for a brisk walk along the pier.

And meeting the odd bird on the way. 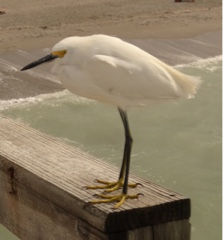 This colourful, but maybe not too informative, signpost told us where we were. 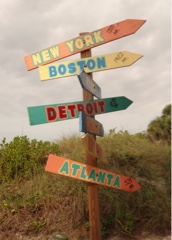 Our destination that day was the Port of the Islands hotel tucked in amongst the Everglades. A bit old-fashioned, and slightly on the rustic side. This the view overlooking the lobby. 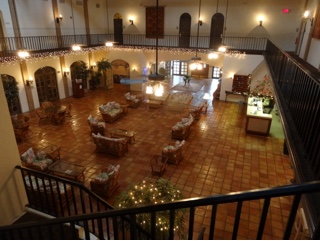 Next morning we drove along highway 41 to Shark Valley - our intended destination. Keeping a sharp eye open for intinerant alligators, we stopped at the Miccosukee Indian village.

There we sampled some very nice freshly made bread and met this man who showed us how he fashioned wood from the cypress trees into axes and other items. 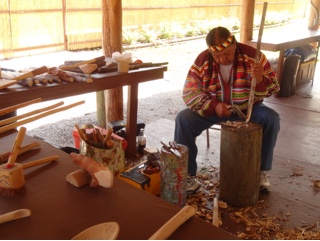 I have a feeling he might make a good subject for a portrait sometime in the future. 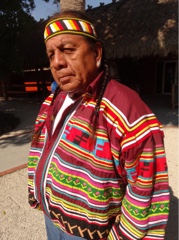 The Indians living on this reservation make a variety of wares. This large woven pot caught my eye. 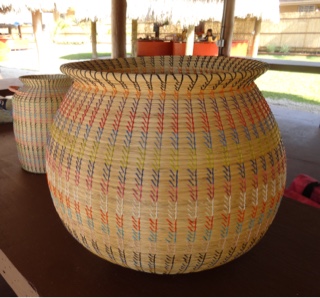 Within the village compound a young man showed us how he wrestled with the alligators. We were surprised how they didn't seem to mind as he pulled a couple if them out of the water by their tails. This one looked a bit aggressive 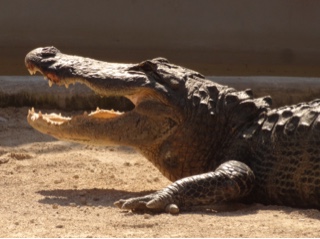 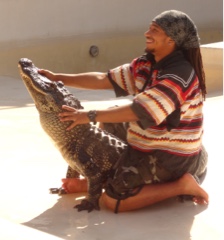 As we left the village we caught sight of this brute 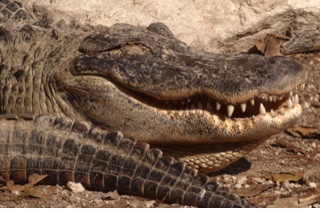 At last we arrived at our intended destination and waited for a tram to take us on a two-hour trip around the Everglades. I hadn't realised that the water in the Everglades is slowly making its way to the Gulf of. Mexico. I always thought it was static. This is a typical view of what is called 'Big Cypress' and consists of a mosaic of prairies and tree Islands. 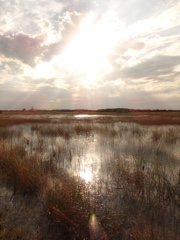 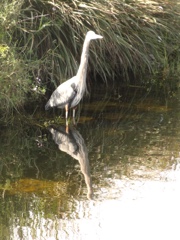 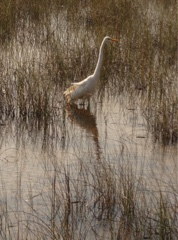 We can't leave the Everglades without another picture of an alligator. This one we saw as it caught a large catfish - you can just see its tail as it disappears down the alligator's gullet. 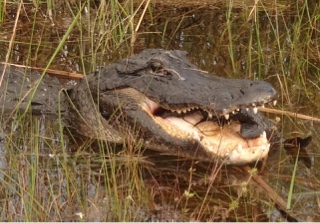 We arrived back at the hotel a little weary so were looking forward to a nice dinner that evening, but when we got to the dining room we found it dark and empty. Apparently, without informing the guests, no meals are available on Monday evenings!  As we were in the middle of nowhere our only option was to drive the twenty miles or so into Naples to find a restaurant. The satnav did indicate there was one about ten miles away but when we got there it was in the middle of a rough looking trailer park so we carried on to Naples, where apart from a brief sojourn in an Italian restaurant smelling overwhelmingly of cheese and garlic (the two things I hate most), we finally found a really good steakhouse.
The following morning we drove to Sanibel Island. Renowned for its shells, we took a stroll along one of its beaches but  couldn't find anything much. 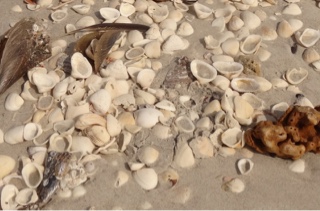 There were lots of wading birds there. 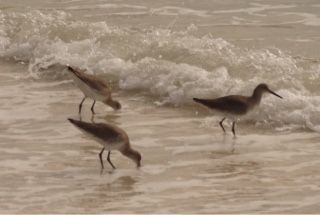 Being such a small island we found ourselves in a number of traffic queues, but did find time to stop off at a 7/11 store where I bought ten lottery tickets. America was going crazy that day because the jackpot had reached ten and a half billion dollars. Yes that's right - BILLION. This blog would take on a whole new complexion had I won. But I didn't. Our hotel in Punta Gorda that evening was rather sumptuous, and we had arranged to meet Paul and Jacquie Eaton at the Captain's Table in Fisherman's Walk for dinner. Paul is a jeweller and sculptor. They live in Englad but have a holiday home in Florida nearby. Paul makes the most exquisite works of art in precious metals.
Next morning we visited the Edison and Ford winter estates at Fort Myers. 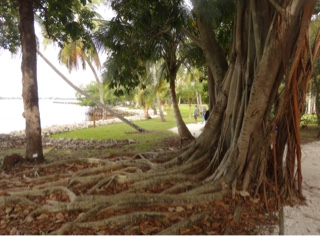 But more about that on my next blog. I'm a bit tired right now.