Fishy end to a holiday

Now we are back home after a shorter flight than the outward journey - partly due to to the tailwind across the Atlantic Ocean but this time without hugging the east coast of America because of the really bad weather which, in fact, had caused most airports north of Florida to close.
Our last day in Florida was spent having a last visit to the art gallery where Kay had prepared a little 'goodie-bag' of cookies and chocolates for us. Then Kay and Mike announced that they were taking us to lunch at a very interesting restaurant. I can't quite remember the name but it was big and rustic with an enormous stone fireplace ( larger than those in Hampton Court Palace) in the middle of the room. We then drove to Tampa Aquarium. 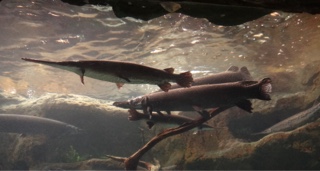 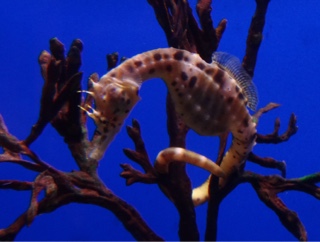 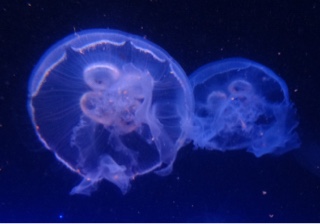 What really intrigued me were the Dragon Fish. I'd never come across this kind of fish before. To watch them swimming around was quite enchanting. Only occasionally when they swam past could you make out their real dragon-like features. This is one of many photographs I took which gives an idea of their movements 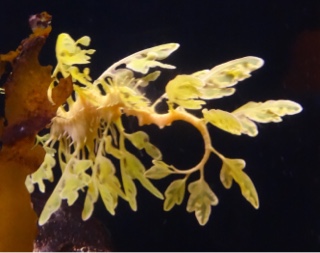 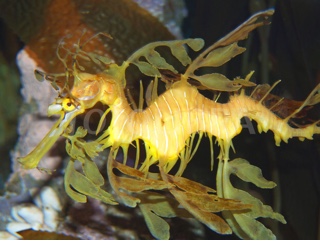 But now we are home, driven from Gatwick airport by a very dozy taxi-driver. As he was swaying across the road from time to time my young friend suggested that he ought to stop somewhere to have a coffee to wake himself up a bit. He didn't, but drove slightly better for the rest of the way home.
On Wednesday the rain lashed down mercilessly. I headed for Hertfordshire almost blinded by the spray from numerous lorries on the three motorways I needed to travel on. My destination was St. Mary's church in Essendon where my friend Bryony Brind's memorial was being held. 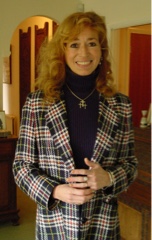 Bryony died tragically at the young age of 55 after a glittering career as a principal ballerina of the Royal Ballet at Covent Garden. The youngest ever dancer to play the lead role in Swan Lake, Bryony was chosen in 1981 by the world famous Russian dancer, Rudolf Nureyev, to partner him in La Bayadere at Covent Garden.
The Church was full to overflowing and many tributes were made, not only about her glittering career, but about her as a vibrant and lovely person. Here's one of the several miniature portraits I made of her. 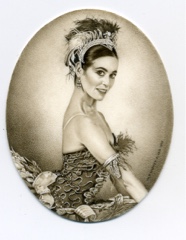 I do some silly things from time to time. This week, apart from shutting my wall safe so hard that it needed all the expertise of my young friend to open it again after I'd given up on it, I managed, while bathing, to somehow hook my ring over my big toe nail! Luckily I eventually managed to extricate myself without calling for help or the need for a plumber. (Which reminds me of an old joke - A young  lady became stuck whilst sitting on a freshly painted loo-seat. Her husband couldn't extricate her so called the plumber but took the precaution of placing a bowler hat on her lap to cover her modesty as he raced upstairs ahead of the plumber. When the plumber arrived at the bathroom he surveyed the scene and said. "Well, the lady I can save but I'm sorry the gentleman's too far gone".
I ordered a new IPhone in December from my provider, Vodafone, and am very happy with it, but discovered, when I received my January's bank statement that they'd taken a fee over three times the monthly amount agreed. So I rang the Vodafone customer service number. I don't know if you've ever tried to ring Vodafone. First of all I was kept in a 40 minute queue. If that wasn't bad enough they played really horrible pop music - on a continuous loop. After about the tenth time I heard the message "sorry for the delay, we will be with you shortly" I couldn't help shouting at the phone - to no effect of course. When someone did finally answer I used my past experience of the many trips I made to India to decipher what she was saying. Apparently they had charged me for two phone numbers! As I only have one mobile phone I had to assume someone else has taken out a phone number using my bank account. After passing me on to another operator (and this time less than 25 minutes on hold - still the same irritating music) I was told that I did have two phone numbers  and there was nothing I could do about it. Their fraud department had checked it out and 'no fraud was active on  my account'. I felt totally helpless. But the following evening my young friend came to my rescue. First she tried telephoning with exactly the same result - they just insisted that I had two active telephone numbers! So being computer savvy, and seeing me in an incandescent state of distress, she found Vodafone's 'Live Chat' department on my computer. And she was soon live chatting. It took over an hour, and although they started off by insisting I had two numbers, finally agreed that when I received my new phone they'd also assigned another number to me. They agreed to cancel the extra number and credit me with £80 ( less than what I calculated they had overcharged me) which I accepted. Still haven't seen what they charged me in January and not 100% sure all is OK yet, but at least I slept happier that night.
One of my Christmas presents from MYF was an intriguing 3D jigsaw puzzle. It's of the Taj Mahal 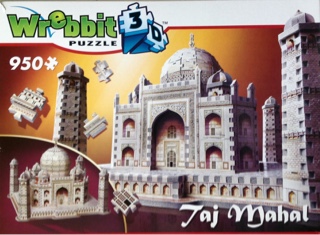 We're having great fun so far
I 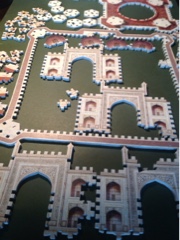 I'm currently working on two very tiny miniature portraits. The heads on both are just over a quarter of an inch high. Very tricky - glad I have a new magnifying glass with super-duper bright daylight light. I have just finished another tiger painting. It's about six inches diameter. 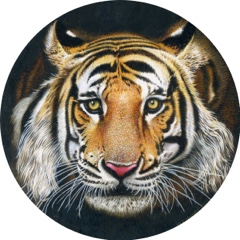