I was thinking about my old friend Rose Amelia Fitzhugh the other day. When I say old I mean really getting on a bit. Her hundredth birthday party was one to remember. Held in the garden of one of her daughters she was surrounded by cards, presents and champagne, including a congratulatory card from the Queen. Rose radiated happiness. Especially when a familiar figure walked towards the microphone and spoke. He apologised for the absence of Her Majesty the Queen, who he said was unable to be present on this auspicious occasion, but hoped Rose wouldn't mind if her son spoke on her behalf. Rose, being an ardent Royalist, didn't mind at all. Prince Charles gave a wonderful speech and seemed to know all about Rose's life and achievements. His presence was the highlight of a really wonderful day. No one volunteered to tell Rose that 'Prince Charles' was in fact an amazing double - both in voice and looks. (I was taken in myself for the first few minutes). Rose sadly died later in the year but no one ever told her that her guest of honour was not the real heir to the throne. This is a painting I made of Rose in her ninetieth year. It was exhibited at the Royal Academy's Summer Exhibition. 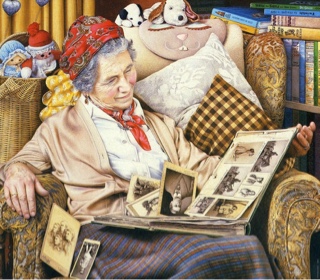 Talking of nice things, I was intrigued by an interesting little story broadcast on BBC Berkshire yesterday. Builders were renovating an old house and when they came to the chimney, nestling within its depths they found a folded scrap of yellowing paper. Intrigued by their find they opened it and discovered it was a boy's Christmas list he'd obviously posted up the chimney for Father Christmas many years ago.

His wish list included a Rupert annual, slippers, box of chalks, toy soldiers and Indians, a pencil box, and intriguingly a silk tie. The note was probably written in the early forties, during the war. By tracing the owner of the house at the time the enterprising builders located the boy - now a man of 78. Not only did they return the note to him, but amazingly found and bought all the articles he'd asked for all those years ago, which they then presented to him. 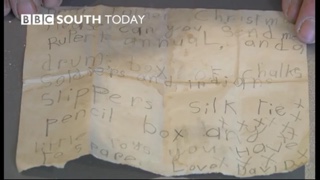 I don't think many children of today would be so modest with their Christmas list. Anyway I  thought it was a very nice Christmas story in today's materialistic world.
Had my CT scan and blood test last week but have to wait till Monday week before the oncologist gives me the results. So fingers crossed. Incidentally I finally reached the great age where I became eligible to be given a shingles vaccination. So having had a flu and pneumonia jab I think I've got most things covered by now!
As a practising artist it's nice to be able to help out from time to time with young aspiring artists. So when a lady rang the other day to ask if I could spend some time with her 13 year old daughter who wanted to study Nicholas Hilliard  - one of England's most famous miniature portrait painters - I was happy to give her any help I could.  Being a miniature portrait painter myself I knew quite a bit about Hilliard. He had written 'A Treatise Concerning the Arte of Limning' (Limning meaning miniature painting), a copy of which I showed her. She came over on Saturday morning and produced a portfolio of her pencil drawings - mostly portraits - which were very good. Nice to be able to help out with a few hints on drawing and to give her one of my own little books.
My young friend and I decorated my Christmas tree on Saturday. Every year I buy a few additional baubles. And a faithful friend in the USA always sends me specially made, and rather special limited edition Christmas trinkets, to add to my collection. This is a little section of the tree. 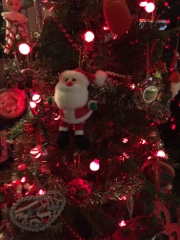 All my Christmas cards have been sent, but to any of my followers who have not received a card I'd like to wish you all a very Happy Christmas with this one nestling amongst some of the presents. 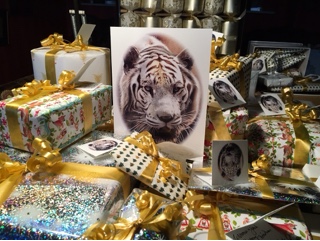 Just finished this pencil drawing of Kevin Giddings - 'The Royal Flueologist'. Being a chimney sweep, when he's asked to be a guest at weddings he arrives complete with top hat and his black cat on his shoulder. A chimney sweep at a wedding is supposed to bring good luck - especially if he has a black cat with him. The speciall hard 'Hammer' paper I normally work on is now no longer available. Apparently they've stopped making it. A great shame because it's the only surface I find I can get a jet black to be smooth. So I'm still searching for a good substitute. This drawing was made on a much softer paper and so can't give me the finish I strive for, although I've darkened it quite a bit for this blog. 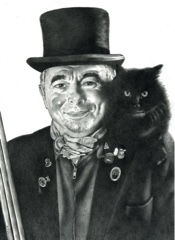 I mentioned in my last blog that I'd taken my painting of the SwanUppers to The Vintners Hall in London. They've just informed me that they have decided to purchase it and have it on permanent exhibition on the walls of the Swan Room. I am delighted because it will now hang there for ever. 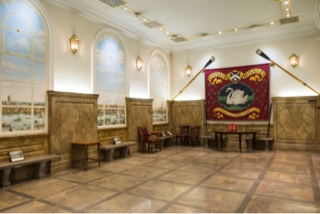 THis is their crest 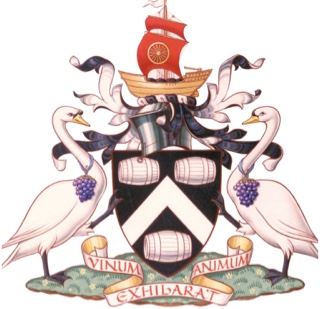 I'll end this blog on a sad note. My very good friend Bryony Brind died last week at the young age of 55. Bryony became the principal dancer at the Royal Ballet at the early age of 21 when she took the leading role in Swan Lake. The following year when world famous dancer Rudolf Nureyev was invited by the Royal Ballet to stage the classical 'La Bayadere: Kingdom of the Shades' he chose Bruony to be his ballerina. Here is a miniature I made of her in that role. 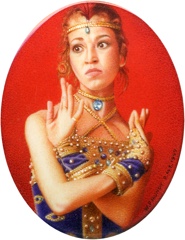 And this miniature portrait of Bryony was her favourite of the several I painted of her. 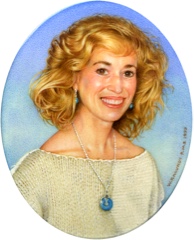 Spirited, lively, warm-hearted and talented, she'll be missed by her many friends. RIP Bryony.