This torus-shaped building is the size of Wembley Stadium and is the home of the Diamond Light Source. 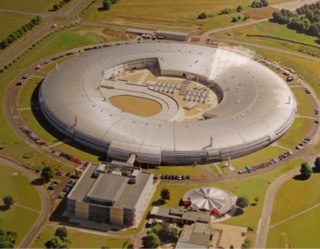 My young friend had booked us on a specialised tour of this incredible building last Sunday. It's the home of the UK's national synchotron facility, and is located at the Harwell Science and Innovation Campus. I had no idea what to expect, but assumed It would be way above my head. Which in fact it mostly was. Nevertheless it was a fascinating two hour tour. The Diamond is a particle accelerator that creates X-rays for scientists to use to study the sub-atomic structure of material.
However, before going on the tour, we spoke to some of the scientists at the entrance who were talking about their speciality. 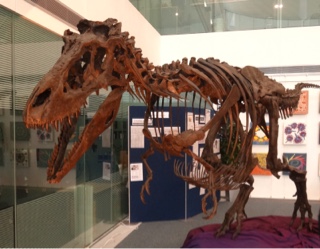 This was a full size model of a 72 million-year old gorgosaurus's skeleton. And then the scientist unwrapped from a special case this real skeleton of the head of the actual creature. 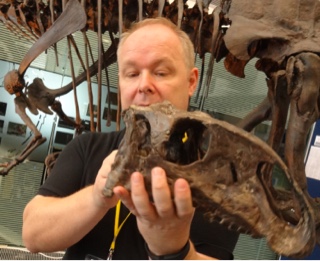 So now for the tour. This is a view from the floor above the actual particle accelerator. 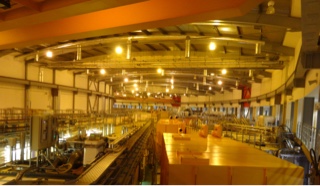 Here you can see, on the floor below, part of the particle accelerator. This is a series of massive magnets that contain the beam of electrons and speed them up so they are travelling at almost the speed of light. As light and other electromagnetic waves cannot travel round corners the route of the electrons proceed in a series of small straight sections. 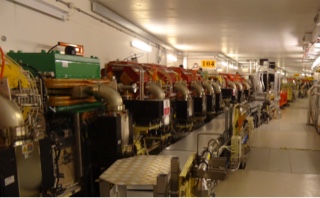 We were taken through a myriad of bright alleyways, sporadically interspersed with cordoned off sections containing X-ray radiation elements. ( A bit like hospital X-rays or scans, but a hundred billion times stronger).
Although most of what we saw remains a mystery to me, the beauty of the myriad of tubes, wires, machines and cables was very attractive. Here are a few of them. 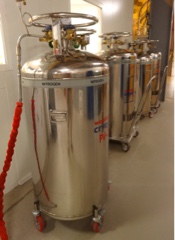 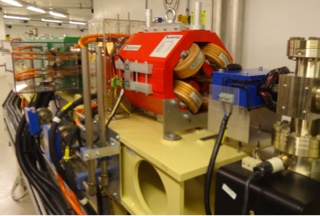 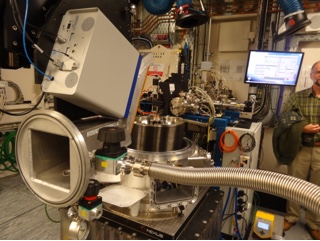 That's enough machinery. This is a portion of the building as we we drove past on our way home. 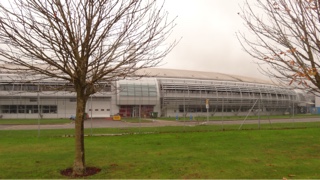 The other evening as I was backing out of the copse I brushed by a black car more or less invisibly parked nearby. It left a small scratch on his bumper and a larger scratch on mine. I told the owner I'd pay to have the scratch repaired. So imagine my surprise when he gave me a bill for £600 yesterday! He'd got a quote from a very expensive company (who seem to specialise on repairs claimed on insurance). I compared the estimate with my local company (who've repaired my car beautifully in the past). They reckoned, based on my description of the slight damage, that their price would be no more than one third of the quoted price). In the end I decided to make my first claim from my own insurance. Which resulted in no charge at all. (I hope).
Reluctantly my young friend decided the time has come to prepare her banana tree for the winter. In it's second year it's already grown to over seven feet tall. 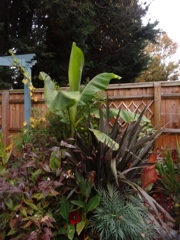 So she's cut all the leaves off and packed the stump with straw, erected bamboo stalks around it and covered the top with bubble wrap. That should keep it warm and dry over the coming months. As the leaves came down we discovered about five new little shoots of bananas around the edge. Maybe there'll be more trees next spring. Here she is holding up one of the leaves she slaughtered.

I bought a new iPhone this week. It's a beautiful golden colour Apple 6S. Just the right size for my shirt pocket with 64 gigabytes of space. I love new toys.
Sadly Warren Mitchell died yesterday. You'll probably remember him as Alf Garnet in the TV sitcom 'Till Death Us Do Part' but Warren was a fine character actor and worked well into his eighties. Not too many years ago I was invited to his birthday party at his house in Hampstead. As I'd met him on previous occasions I was able to present him with this scraper board drawing. Which he really liked, he said. 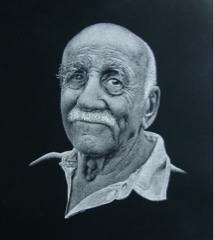 Many condolences to Connie, his wife.
We are having a short weekend in Suffolk staying with MYF's parents. On the way here I noticed this tattered old circus poster attached to a big post and thought it might make an interesting subject for a painting - maybe the background of a picture of a clown.

And in complete contrast a peaceful rural scene at Wyken Hall to complete my blog. 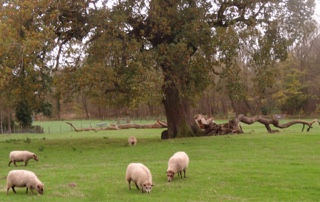