Next January we'll be visiting The USA to attend the Miniature Art Society of Florida's annual exhibition at the Dunedin Fine Art Center. We also plan to spend a couple of days in the Everglades (where we may hire a couple of kayaks for a short while - very short if we encounter any alligators!) And after a day at the Kennedy Space Center (where I might become reacquainted wth this astronaut).... 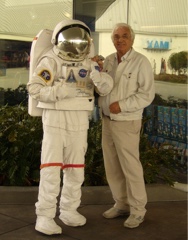 ....we'll spend an evening with old American friends of mine. Michael is a great admirer of Sir Winston Churchill. To the extent that many years ago when I painted an oil portrait of him he asked me to include a portrait of Churchill in the background. Having recently read the excellent book 'The Churchill Factor' by Boris Johnson I bought a copy for Michael and sent it off to Boris with the request that he sign it and include a special dedication to my friend. Which he did, so unless Michael reads this blog, it should be a nice surprise for him.
Last Wednesday I visited The Vintners Hall in London. 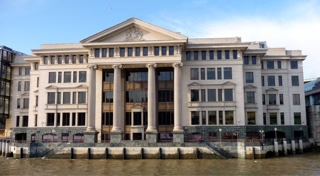 The reason was to take my painting 'SwanUppers at Marsh Lock' there with the possibility that it will become a permanent feature in this most beautiful of Livery Companies. The Worshipful Company of Vintners was granted the Royal Charter in 1364, and is acknowledged to be 'one of the great twelve Livery Companies'. I had a short tour during my visit and was immensely impressed, particularly with the paintings. There was one of King Charles 1st by Sir Peter Lely which I particularly liked and many many more. Here are a few views of some of the rooms. 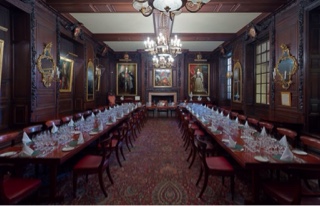 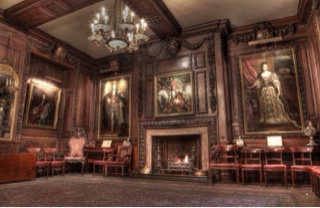 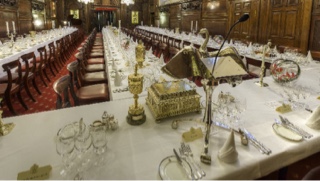 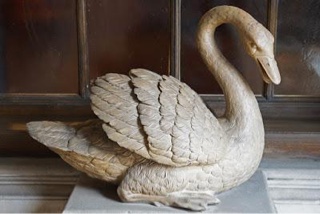 Each year during the third week of July the SwanUppers, headed by The Queen's Swanmarker, row along the Thames as far as Abingdon marking all the new cygnets born that year. 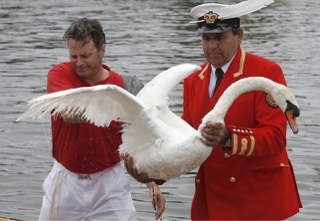 So it would be so pleasing for my painting to be hanging in such prestigious surroundings and to know that it would be there forever. 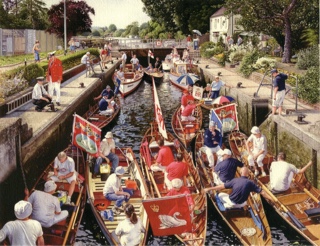 I've been so busy painting these last few months. Managed to finish three miniatures, a couple of pencil portraits, and a watercolour portrait. But as the clients haven't seen the miniatures yet, and as the others are Christmas presents I won't be able to show them yet.
Phyllis Court held two very good Christmas Fayres over the past couple of weeks, so I went along to both and bought quite a lot of presents. Still got a way to go, but here's a selection wrapped and ready to deliver. 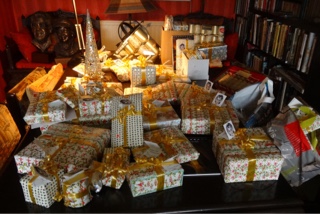 My cousin, Jill Lawrence, graced the airways of BBC Berkshire on Thursday. She was being interviewed about the heavy snows in 1963 and how she was taken to hospital to give birth to her eldest daughter. Because her husband, Trevor, was working that day and because the snow prevented  him from using his Lambretta, he made the journey by bus.
Our Regal cinema in Henley is so comfortable. Soft seats, lots of legroom, and usually a nice appreciative audience. We've seen two films in the last fortnight. 'Spectre', the latest James Bond spectacular, was, in fact, spectacular. And last week to see Maggie Smith starring in 'The Lady in the Van'. What an incredible actress. You could almost smell her portrayal of the old lady. And what a contrast to her role as The Countess of Grantham in The TV series 'Downton Abbey'. 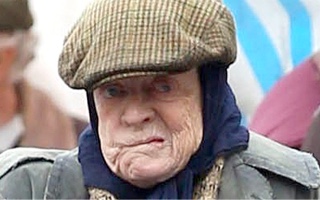 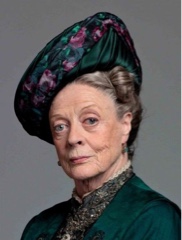 A couple of weeks ago a very lovely man, Norman Topson MBE,  retired after 43 years working for the railway - the last 14 of them as Stationmaster at Twyford station. 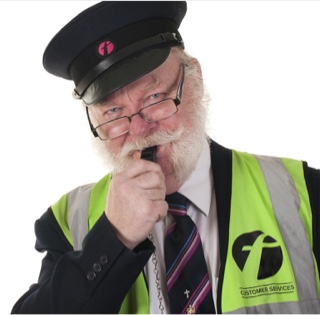 A father figure to the many children who travel by train, and a caring, professional, and always helpful railwayman, he was admired and loved by so many. His retirement was marked at the station by a whole series of presentations. Among them was my miniature  portrait given to him as a result of a very generous collection by his many friends.