Reflections in the Dark

Last Saturday we were invited to a sumptuous dinner party at Annie Coury's riverside house in Wargrave. There were about 30 of us and when it became dark, from our vantage position on the balcony we watched a very impressive firework display. It marked the culmination of the Wargrave and Shiplake Regatta. As we waited for it to start The New Orleans riverboat slowly passed by. 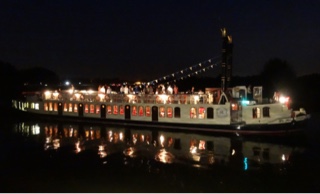 And then the fireworks. Here's a couple of pictures showing the reflections in the river. 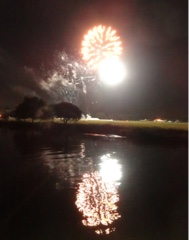 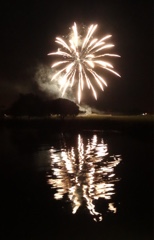 Thank you Annie. Lovely evening.
I'm now without a boat. Marsh Mundy is still out of action - carburettor  trouble. And the other day my young friend and I took little Marsh Midget out for a trip. Hopefully along the Hennerton Backwater. But it was not to be as we found about 10 inches of water in it. MYF bailed it and we started out but it was apparent that there was a leak somewhere. So we turned back after only about half a mile, bailing as we went. (Well, she bailed, I just sat on the middle seat where the water didn't reach) Upon our return neighbours Guy and Bill helped us drag it out of the water on to the little piece of land where the swans make their nest. So until Alan, the boatman, can attempt to repair it (probably a temporary bodge I expect,) it lays forlornly upside down in the garden. 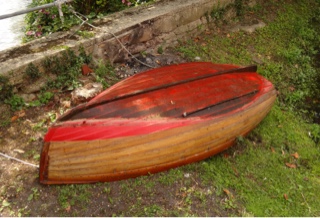 We went to see Mission Impossible on Tuesday evening.

What a great action-packed film it was. Amazing car chases and incredible action. I'm told Tom Cruise performed most of the stunts himself. 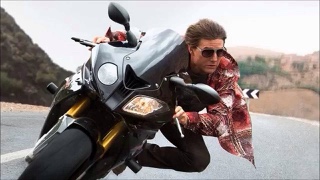 I was gripped throughout the entire film - didn't close my eyes once - and that's in the cinema with the most comfortable seats I've ever sat in. Highly recommended. Go and see it 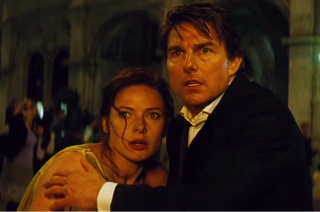 Great story too.
It's been so rewarding helping my young friend with her garden. Starting from a bare piece of grass with a nearly 30 degree slope, all the hours of planning, planting and pruning are now paying dividends. I've never had a garden of my own, living in a flat, so it's been fun to help her with hers. Obviously we've had a few failures - especially with bulb planting (we forgot that the squirrels and other little unknown critters watched us plant them in the winter with a view of digging almost all of them up to feast on in early spring). I'm not so patient as MYF and despaired a bit when the bamboo in the 'jungle' area started to go brown, and the grape vine didn't produce any grapes. But today the banana tree is thriving and growing new leaves every week, the bamboo is looking great and although we don't have any grapes the apple tree has produced three apples. Here are a few views of the garden today. 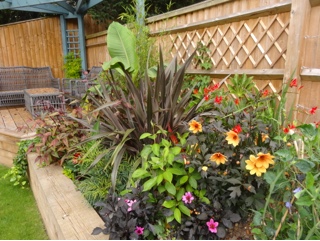 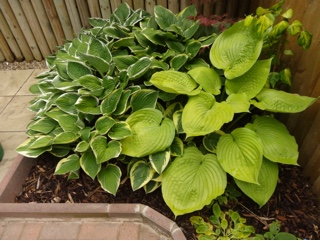 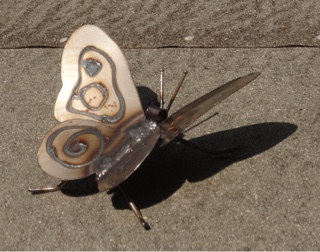 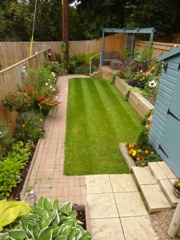 I finished my big painting of gondolas in St Marks Basilica last week. It took 250 hours and I'm waiting for the photographer to make a decent print of it. He finds it difficult to produce an accurate colour rending of my watercolours it seems. The lovely smooth watercolour board I used to work on is no more and I find it very difficult to find a surface of the same quality. I need smooth paper which can take really fine work but can equally accept washes without blotching or drying too quickly. For example I've just started a new painting of a Venetian canal scene and the first day's work was abandoned as, although a 'hot pressed' surface it was still too rough for successful stippling. Here's a section of the initial attempt (look at the blue plastic cover) 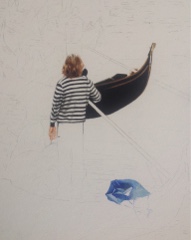 And here is the second attempt in progress on a new type of paper. Not so great for washes, but good  for detail. 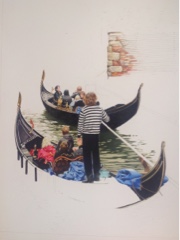 The other Sunday we paid a visit with Val to an old friend, Joanne Dalston, in Bampton. She made a lovely lunch, and later we had tea in her garden. I love the Cotswolds and Joanne converted what was an old cowshed into one of the most homely homes I know. I first met Joanne and her husband Chris in Singapore in the 70's when they were serving in the Royal Airforce there. Nicola, Joanne's daughter, lives in America but visits her mother regularly. When she's here she becomes a hive of activity and helps her mother in many ways. Last month she worked in the garden - and this is the result. You can see Val and Joanne peering over the top of the door. 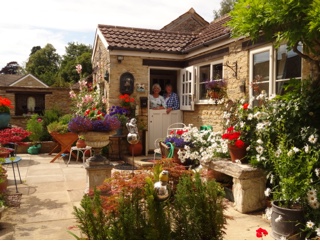 On Saturday we went to The Town and Visitors Regatta in Henley. This is our local regatta and is such a friendly affair. As a member I was able to get aboard one of the umpire launches with MYF and follow one of the races. We followed this women's eight from the start to the finish near the Henley bridge. 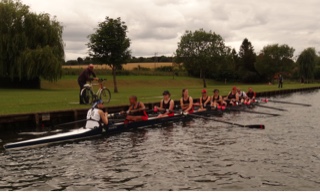 And back for a complimentary Pimms in the members tent. Here's Tony Hobbs and John Luker - well-known Henley characters. Tony owns the Hobbs Boatyard and a number of boats, including The New Orleans riverboat. John, until he retired, was the chairman of The Henley Standard newspaper. 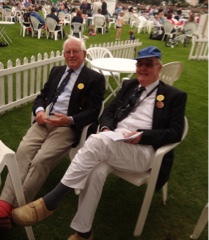 I've just been watching the 70th Anniversary commemoration ceremony of VJ Day. Great to see so many veterans from Burma and the Far East parading in London. Bemedallled and spritely old soldiers, brimming with humour and recalling days past. Hard to believe that some of them are in their nineties, and even a few hundred year-olds. Having been in the army in Asia myself, although obviously never experiencing the hardships of the veterans who survived the Japanese prisoner of war camps, I really do admire them for their fortitude under appalling conditions.
And I remember exactly what I was doing on VJ Day all those years ago. I'd broken my knee-cap by landing heavily on my feet in the long jump at the school sports day the previous week and was encased in plaster up to my thighs. So all I could do was sit in the bay window of our house with my leg on a chair while I watched all the other children sitting down to a tea party on long tables that stretched down our road! Huh! Hope my mother brought me a cake!