I made a bit of a boo boo the other day. Having seen Dennis Waterman at the funeral of George Cole on TV the other day I  thought his craggy, lived-in features would make a great portrait. Pam Flint, his wife, was an old friend of mine so I thought I'd give her a ring to sound her out as to whether Denis would be prepared to sit for me, or at least let me photograph him. I rang their number. A man answered. "Is that Dennis?" I said. "Yes, it is" was the reply. "You probably won't remember me, but you invited me to an art exhibition of a friend of yours in Henley a number of years ago." I said. "Did I?" He sounded a bit mystified. "We met then, although the artist may have been a friend of Pam's. My reason for ringing was to ask if you'd let me paint your portrait." "I don't know any Pam's" he said. It was my turn to be mystified now. "Pam Flint - your wife." I ventured. "I'm not married to Pam Flint" he said. I knew he was because I'd seen them both at the funeral. Then it dawned on me that I may have called the wrong number. "This is 01753*****" I said. "Yes it is" was the reply. "And you are Denis Waterman?" "People often ring me here and ask to speak to Dennis Waterman" he said.  "I am Dennis, but not Waterman." With profuse apologies I crawled back into my hole!  And still don't know the right telephone number.
Since we returned from our weekend in Venice I've been busily painting Venetian pictures. This is one of them - I call it 'The Nine Gondolas'. 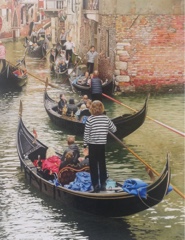 And this one measures about 28 by 22 inches and is called 'St Mark's Basilica at Sunset". 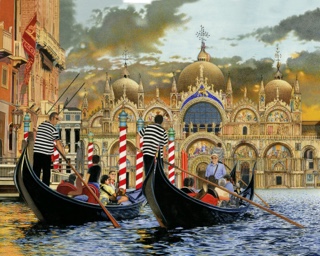 I seem to specialise in water reflections these days. One of these two watercolours may become a wooden jigsaw puzzle next year as The Wentworth Wooden Jigsaw Puzzle Company  have in the past made jigsaw puzzles out of seven of my paintings.
After collecting my two paintings from the Llewellyn Gallery in London last Saturday from their 'Not The RA' Exhibition when we arrived home we found a message inviting us on Brian and Jane's boat later that afternoon to see ( or at least, hear) Henley's Rewind Festival. So sipping our Pimms and wine we went downstream and around Temple Island - passing the venue with its vast array of colourful tents, flags, and all the trappings of this annual musical event. 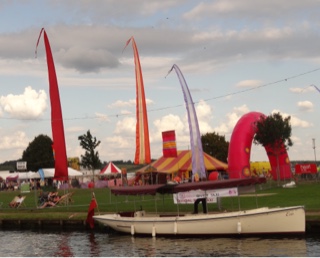 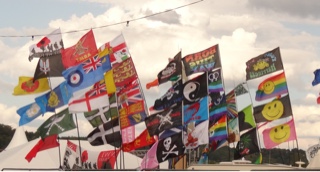 As we couldn't tie-up on the riverbank we thought we'd anchor in the middle of the river and at least hear some of the music. As the anchor chain didn't seem to be attached to the boat we lost the anchor so tied up to a big boat for a while. It's always nice coming home in the twilight from a boat trip. Here they are leaving the mill pool after dropping us off. 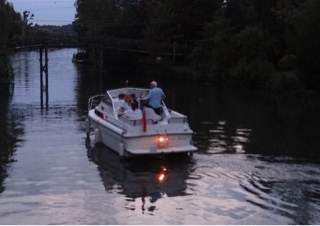 We went out on my little dinghy yesterday afternoon. The leak seems to be mended - although I know it's only a temporary repair. In the winter when it's laid up I'll have to find a competent boatman to make it a new keel and cover it with a metal strip. There's always something new to see on the river, no matter how many times we go on it. I hadn't noticed this dragon on one of the Henley boathouses before. 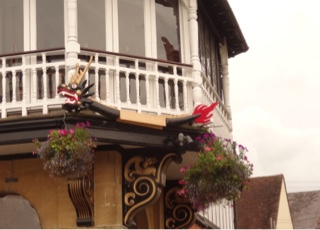 But these days we come across the occasional motor car driving along on the Thames. 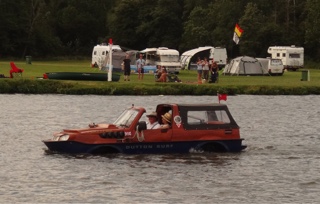 We called in to Greys Court this afternoon. The apple trees are everywhere. Never seen so many, and all laden with fruit. 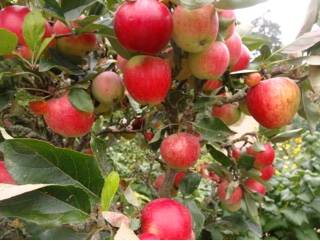 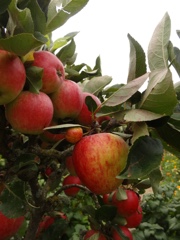 And the flowers are looking good too. 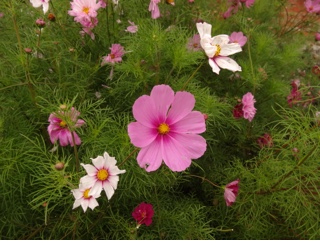 Last Sunday I was invited to a lovely barbecue by my niece, Louisa, at their home in Marlow. Such a nice evening. It was Kate's ninth birthday the following day. She's a great reader. Has read all the Harry Potter books, and was just about to start 'Little Women' by Louisa May Alcott. When Val, her grandma, said "Shall I I tell you how it starts?" "How do you know that, grandma?" she said. Val then recited - "Christmas isn't Christmas without any presents." Kate was amazed! 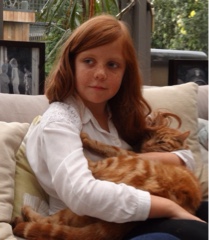 We met with Paul Carter, my cousin, the other day at the Swan at Streatley for dinner. The occasion was to hand over the bronze bust I'd been working on for the past few months. Here's Paul posing at a late stage of the modelling. 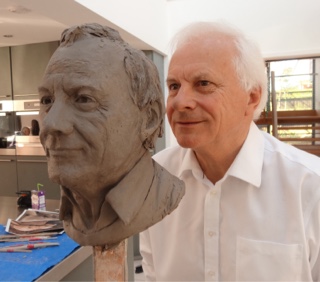 And here's the finished bronze. 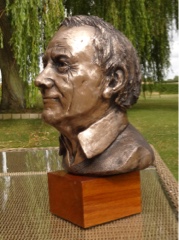