A view from the Top

My young friend and I were very privileged to have been invited to watch Reading (the Royals) play Charlton Athletic at the Madejski Stadium this afternoon. No we didn't dress down and wave supporters scarves to watch the match from the cold stands, we dressed up as we were invited by Sir John Madejski to join him in the Directors Lounge for a sumptuous lunch. Then at three o'clock we were escorted to our front row seats giving us a marvellous view of the game. 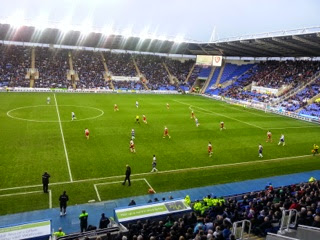 It was my young friend's first ever football match she had watched from inside a stadium. And it was my second as my father had taken me as a boy to watch Reading play in their old Elm Park Stadium. (In those days they were called 'The Biscuit Boys' after the Huntley and Palmers biscuit company) What a contrast to Sir John's magnificent Madejski Stadium. During half time we went back to the lounge where tea and cakes were served. Then back to the game. Unfortunately Reading lost 1-0. A real afternoon to remember.
It was my birthday on Thursday which we celebrated at The Reformation in Gallowstree Common in the evening. Sister-in-law Val, cousin Paul, Brian and Jane came and my young friend surprised me with this beautiful birthday cake. 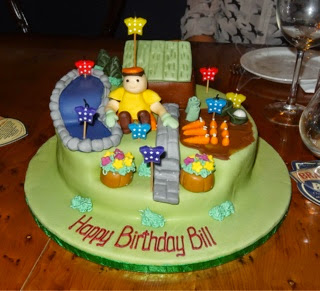 It represents my gardening exploits in her garden - although we didn't grow any carrots there. And this is what it looked like when the candles were lit. 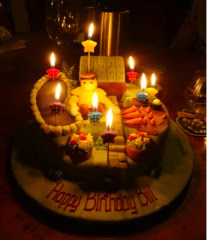 We had a lovely evening - good food. Very friendly atmosphere and great company. I was told by the pub owners that on Thursday evenings the 'Tractor Boys' descend on them and it could be a bit rowdy. These men parade their tractors from time to time, sometimes totalling over 40 at a time. When they came in I noticed quite a few rustic faces amongst them - good subjects for portraits. But I didn't have a sketchbook with me. I did, however, have a portrait with me as I had just made a pencil drawing of cousin Paul and gave it to him during the evening. 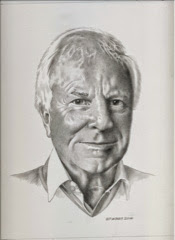 He looks a bit suntanned, but he has just returned from a week's holiday in Spain where the temperature was in the high thirties.
I'm very fortunate in that my studio looks out on to a lovely view of the river which hopefully will never change - except, that is with the seasons. Here we see spring changing into winter through high summer and autumn. There's also the occasional foggy day.

The Miniature Art Society of Florida will be holding its fortieth annual exhibition in Tarpon Springs in January. Of all the major miniature exhibitions this one attracts the most entries from all over the world - almost one thousand. I've just been told that my sepia miniature entitled 'Jane in Lace' has been awarded the Best Portrait prize. 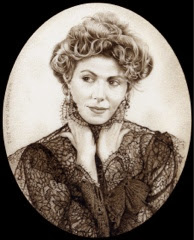