On Friday evening we joined about seventy or so members of the Hennerton Backwater Association at the new Pavilion by the river at Phyllis Court for our annual dinner.  After a really nice dinner and a jocular speech by chairman Tom Berman, everybody moved to the end of the room for the frog game. Six people sit in chairs about fifteen feet away from another row of six. Between them each has a string laid on the floor with a twelve inch wide flattened wooden frog strung along it. The aim is, by wiggling your string as fast as you can - with your hand below your knee - to make your frog reach the other end. It sounds easy, but is hilarious to watch as just before you reach your goal the frog, for some reason, behaves in a most peculiar way. Sometimes it turns round and faces the wrong way. It sounds daft, I know, but it's great fun and after everyone has taken part the grand winner is presented with an intricately carved frog trophy.
B&Q is one of my favourite stores. Or they were till they let my young friend down. She'd bought an expensive, but very nice set of garden furniture there a few weeks ago. This is it. 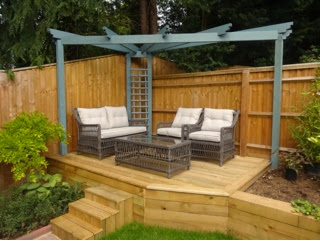 As you can see the set is comprised of a table, double chair, and two single chairs. To protect the furniture from the rain and cold weather she subsequently ordered a set of covers on line from B&Q. All very well but when they arrived only three covers were in the package. Only one single chair cover was there. After several emails and telephone calls she was informed that one of the covers was meant to cover both chairs when stacked together. It just wouldn't work, and left a twelve inch gap at the bottom. They insisted it would. So she took photographs to show it was impossible. They still insisted, and merely said if she wasn't happy to send the set back for a refund. Grrr! She needed fitted covers. So I went to B&Q in Reading last week in an attempt to sort it out. After an hour with the manager who appreciated our dilemma, and did his best talking to the head office, but eventually gave up, as all they could offer was a refund or for B&Q to send a new set. I suggested that if they did we'd just extract the chair cover and send the rest back. No luck. They just said we'd then be charged for another set. We couldn't win. Pity B&Q in Reading don't sell that particular set of furniture as the manager told me he'd have given me the extra cover straight away.
I called in to see my niece Louisa and 8 year old great niece Kate the other day. 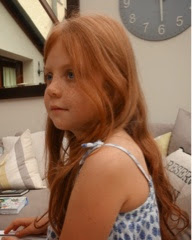 Kate was very excited because she told me she was planning to do a presentation about King Henry VIII at her school and wanted to centre it around my experience a few years ago when I appeared on the BBC television live programme from Trafalgar Square. It was called 'The Big Event' and my task was to paint a miniature of King Henry VIII. There were about fifty other artists each painting a 15 inch square of individual sections of an enormous rendering of the King to be fitted into a great big frame which had been erected on one side of the square. 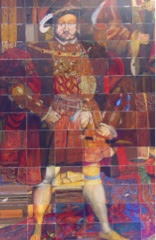 At the end of the day my miniature was collected by an Olympic champion and taken to the big picture where it was attached to King Henry VIII's ring finger. A collector rang me the following day and bought the miniature but I kept a record of it and gave Kate a copy for her project. 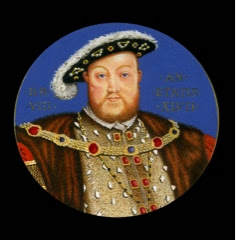 I'm about 300 hours into my large painting of Alan the boatman. As it's all being stippled in watercolour  and I'm at the background stage - dark grey clouds - it'll take at least another week. This is the least exciting part of the picture and I wish I'd left a more interesting part till last instead.
In the past month I've completed three miniature commissions. My favourite is this one of a delightful six year old little girl. She was magic to paint and posed so beautifully. Here's the end result. 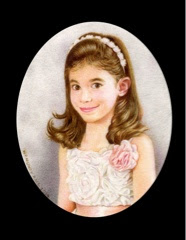 What else have I been up to over the past ten days? Val came over on Sunday and my young friend cooked a delicious roast beef dinner. My cousins Paul and Jim joined me yesterday evening and we all went out for dinner at The Asiana Spice restaurant. Photographed Paul in readiness for a bronze head I intend to make of him. Did something I'd never done before - visited a prison to see an old friend. And bought a few winter flowers and planted them in my young friend's garden. But mostly I've just been painting about 8 or 9 hours a day.