It’s been a lovely weekend - almost wall-to-wall sunshine. But it didn’t start too well. On Thursday I took the train to London to pick up my painting from the Royal Society of Portrait Painters Exhibition at the Mall Galleries. I then went on to The Waterman’s Hall near London Bridge to see The Royal Bargemaster. (I intend to paint a portrait of him against a background of this coming Sunday’s Diamond Jubilee River Pageant.) Unfortunately the Underground Circle Line was not in operation so I took a taxi there. It took ages because so many roads had been blocked due to the Jubilee preparations. Here is one of a few photographs I took of Paul Ludvig – the Royal Bargemaster. 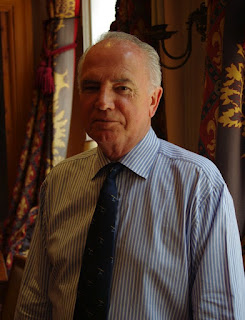 In my final painting I’ll paint Paul in the scarlet uniform he will be wearing on Sunday when he accompanies the Queen at the head of the flotilla. Because I was leaving for Somerset that evening I hurried back to Paddington and boarded my train hoping to be home by about 4pm. Twas not to be. About halfway to Henley the train stopped and after about half-an-hour an announcement informed us that the points ahead had failed and there would be a short delay. It became a one hour wait in the stifling hear of the hottest day of the year! Finally we were told we had to transfer to a 3-coach train on another platform. As I was on a 7-coach train I hurried across knowing not all of us would fit into the new train. Eventually I continued my journey standing up in an overcrowded and unbearably hot compartment and finally arrived home just before six - in time to have a quick bath, pack, and set off to the West Country. I stayed with friends Sharran and Michael North (he of Dragon’s Den fame - being the Olive Oil Expert.)

Next morning I set off for Wells where the Hilliard Society of Miniaturists was opening its 30th Annual Exhibition. This is a view of the moat surrounding the Bishops Palace there. 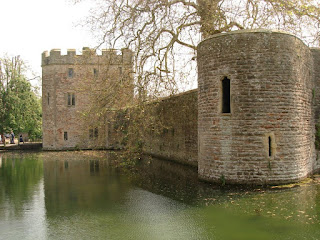 It was very nice to meet so many old friends from the miniature world – here are Paul and Jacqui Eaton (he’s a marvellous sculptor and goldsmith) and Heather Catchpole.
﻿ 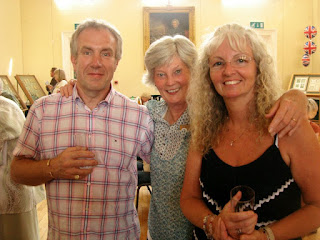 Later in the afternoon I was honoured to be presented with the Bell Award for the best miniature portrait. Here I am, next to our new President, making off with the trophy. 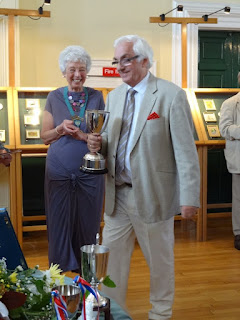 That evening Sharran and Mike joined my party for the formal dinner at Wells Town Hall – the venue of the exhibition, and the following morning I left for Devon. Originally I was due to stay with good friends Ian and Jane Stevens, but they had come down with a bug. So, with the help of the Internet, I booked a room in a hotel in Sidmouth for the next two nights. My first stop was Greenway - Agatha Christie’s holiday home. I’d pre-booked a parking space there. 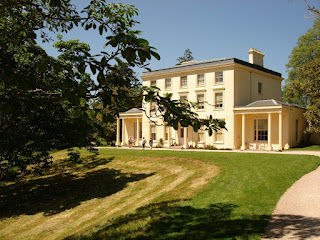 Sited on a promontory above the river Dart, Greenway has been described as ‘The Loveliest Place in the World’. It sure was beautiful. 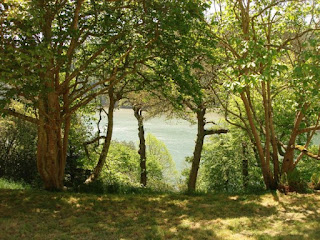 Sited in about 30 acres of woodland, the contents of the house were collected by five generations of the Christie family. Now taken over by the National Trust, I found everyone, starting with the man at the gate, most welcoming and friendly, and had lunch in the kitchen. Before leaving I visited the shop and was pleased to see that they were selling the wooden jigsaw puzzle of my painting ‘Mousetrap Memories’ which depicts a number of items form Dame Agatha’s play ‘The Mousetrap’ still running in London after 60 years. 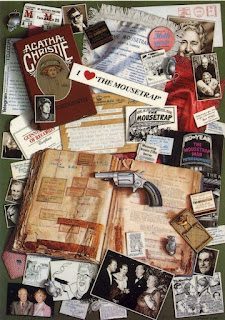 Next stop was the drive to Sidmouth. This is the swimming pool in the garden of the Westcliff Hotel, where I would be staying. 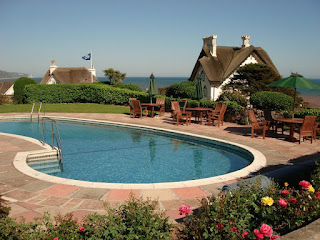 Before dinner I took a walk along the esplanade where I chanced upon this cyclist doing ‘Wheelies’ on what looked to me to be very dangerous rocks. 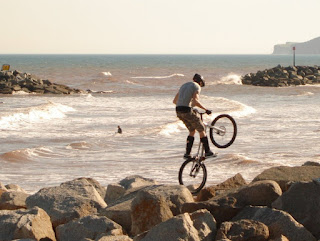 On Sunday morning I called in to see my cousin Dave and his wife, Anne. They live in a house right on the esplanade at Seaton – only 20 minutes away from Sidmouth. Afterwards I decided to visit A La Ronde near Exmouth in Devon. This extraordinary sixteen-sided house was created around 1795 for the Misses Parminter, who decorated it with feathers and seashells, seaweed and sand, cut paper and marbled paint. 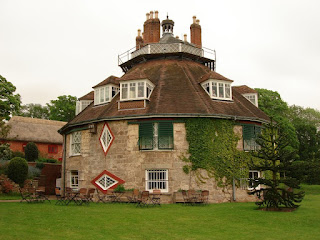 Wandering around the house I was most intrigued. Everywhere you looked there was something fascinating to see. Shells were everywhere, worked into the most wonderful designs. Here’s a parrot decorated with feathers in the Shell Gallery. 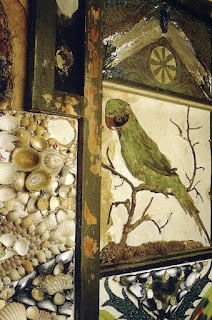 After leaving A La Ronde I chanced upon a Kite Festival organised by the Rotary Club of Exmouth. Scores of incredible kites were flying in the afternoon sunshine. Here are a few of the flags and kites for sale – I bought the one at the top right for my boat. And now a couple of the gigantic kites flying high in the sky. 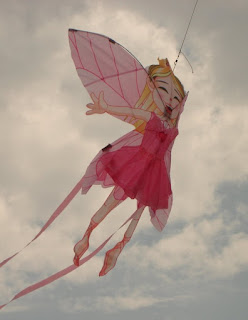 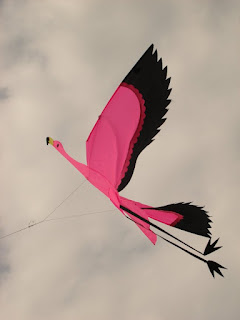 At the very colourful event I had a go on the shooting gallery – and won a couple of packets of sweets. 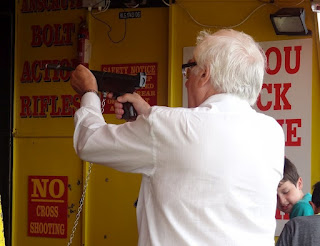 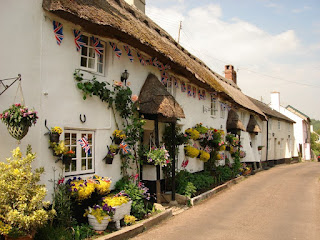 I particularly wanted to visit the old working mill there. To get to the mill you need to walk through a number of fields. This delightful little yellow coloured cottage served afternoon teas.
﻿ 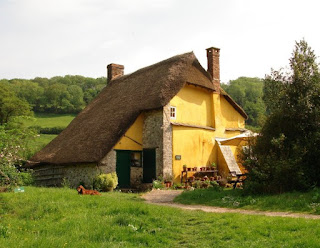 And finally to the mill. I ventured up a very steep ladder to explore the upper chamber. A coarse granary type flour was being ground while I watched. 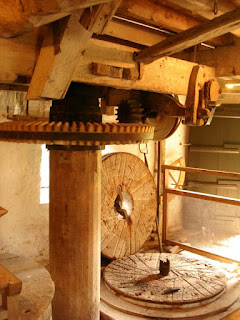 A brisk walk along the seafront and dinner at a nice looking hotel, then, as Samuel Pepys would say, ‘and so to bed’.
In the morning I planned to visit Longleat Safari Park in Somerset on the way home. Having never been there before I was really looking forward to driving round amidst the wild animals. Owned by the 7th Marquess of Bath his commitment to conservation is declared through this mission statement – “ Longleat’s aim is to encourage appreciation and awareness of the world’s natural environment and the species within it through education, conservation and research”. After a look around the incredible interior of Longleat House (This is part of a wall painted entirely by the Marquess) 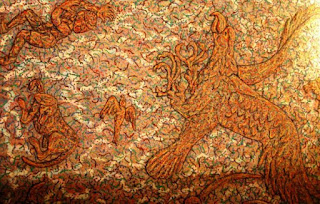 I went for a trip on the lake where I captured this photograph of a sealion as he surfaced by the boat as we travelled along.
﻿ 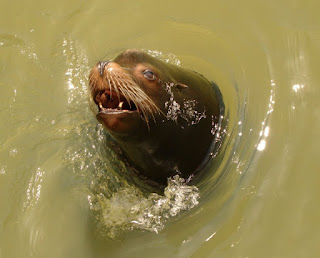 ﻿
Before braving the Safari Park itself I had a look around the many attractions including ‘King Arthur’s Mirror Maze’ – a place to be avoided, as I found it most disconcerting! And here is the bizarre entrance to the ‘Jungle Kingdom’. 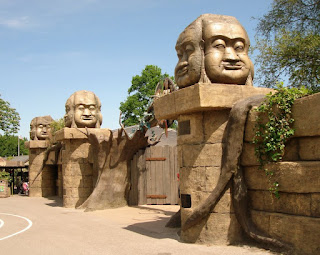 ﻿Then, finally on to the Safari. Much bigger in area than I thought as it winds its way through the park. At the entrances to the large animal enclosures a gate slowly opens to allow you to go through to the sections containing the lions, cheetahs, tigers and other dangerous animals. I’ll just show a few of the photographs I took as I travelled around – mostly with the windows of the car kept closed. 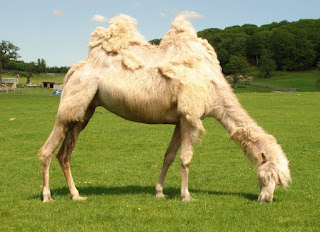 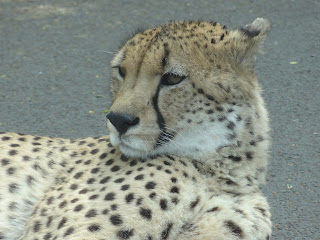 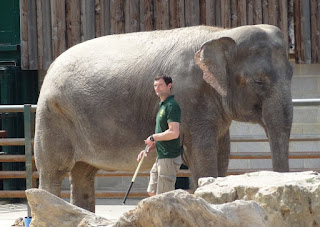 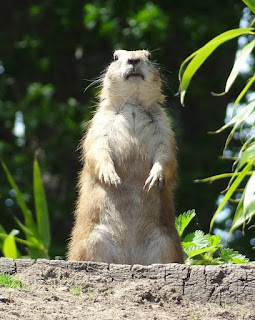 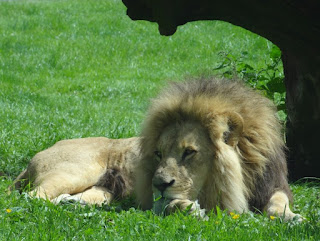 Later in the afternoon I drove up to Pinkneys, near Malmesbury – the home of the Wentworth Wooden Jigsaw Puzzle Company. I wanted to see the factory as now they are producing five of my paintings as jigsaws. Especially interesting was to see how the laser beam wends its way through the wooden boards as it cuts the intricate patterns on the design. Then to end the weekend I called in to Great Shefford to see another cousin, Paul (who’s just written his second blog, by the way) and Jo. We drove to Hungerford where we had a really great Indian meal.