On the way to the west for a short holiday I stopped at Montacute House in Somerset. Built by Sir Edward Phelips in 1598 it’s a huge building and currently houses an exhibition of Tudor portraits on loan from the National Portrait Gallery in London. Here’s one of Queen Elizabeth 1st.
﻿ 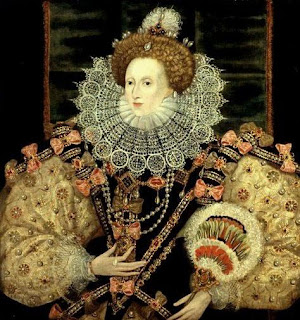 After a tour of the house I found this magnificent and gigantic hedge bordering the gardens.
﻿ 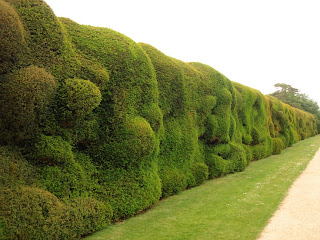 I was told the interesting bulbous shape of the hedge was due to large amounts of snow falling there a number of years ago, which caused the indents. When the snow melted it looked so interesting that they now trim it as it is.
After an overnight stay in St Austell the next stop was a visit to the Eden Project in Cornwall. It’s only ten years old, is dedicated to conservation and regeneration, has grown the largest rainforest in ‘captivity’, and has built three enormous Biomes and a Core, all utilising sustainable construction techniques. 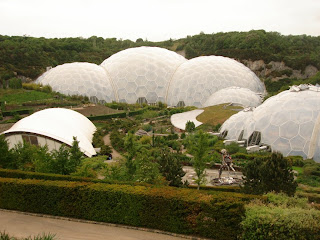 Here are just a few photographs I took on my tour of the project. So much to see. We spent about three hours walking around - I especially liked the time spent in the tropical Biome and took scores of photographs. How about this gigantic bee?
﻿ 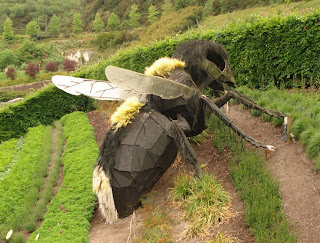 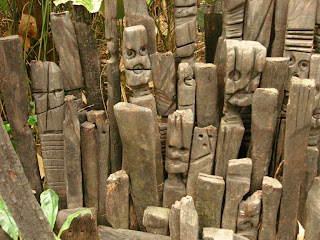 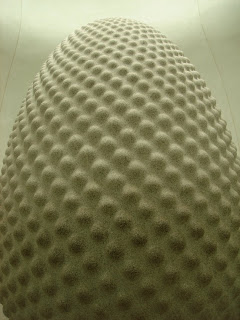 On to St Mawes, on a very windy, cold, and rainy day. At St Mawes Castle I made the mistake of trying to shield my friend with an umbrella, which instantly folded inside out and broke! 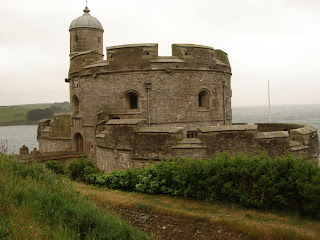 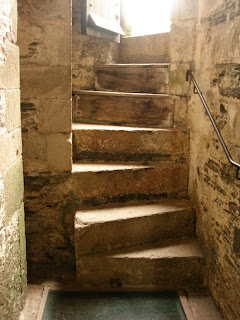 We found refuge in a small restaurant on the seafront where I’m looking out to sea and waiting for the wind to drop a little.
﻿ 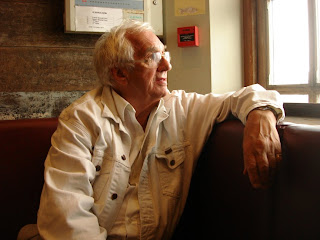 Later, still cold but less windy, we drove to St. Just-in-Roseland to visit my favourite church in England. Founded in 550 AD it lists all the bishops from 1265 right up to the present day. It's surrounded by a semi-tropical garden and is bordered on one side by the Carrick Roads. Here’s just one of the wooden plaques inside the church, and a peep through the trees to a quiet and tranquil scene in the churchyard. 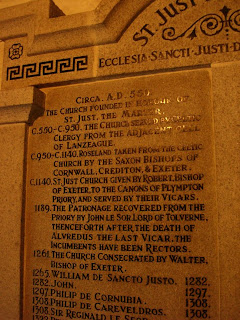 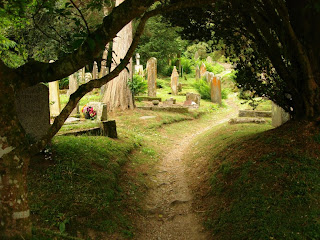 Wending our way through the narrow Cornish roads we paid a tea-time visit to friends John and Beverley in their beautiful house tucked inside a rhododendron decked lane near Truro. As I had arranged to take my great niece Becky out to dinner that evening in Falmouth, where she is at University, we decided to take the King Harry Ferry across the river from the Roseland peninsula.
﻿ 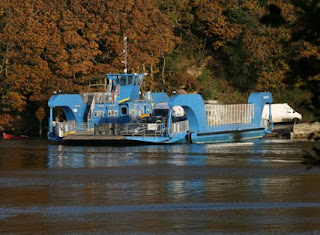 Just before we departed we had a quick look around Smuggler’s cottage on the river Fal at Tolverne. Dating from the 15th Century it was requisitioned during World War 11 and the road and beach built as an embarkation point for the D-Day landings.
﻿ 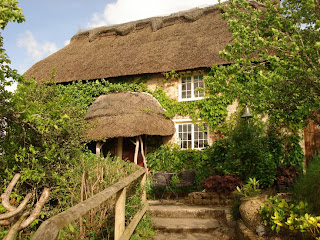 While we waited for the ferry to make its way back to our side of the river I noticed this little boat tied up below us.
﻿ 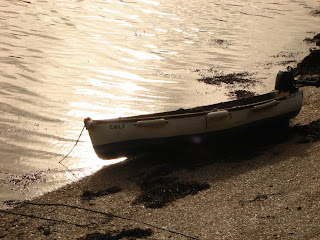 Up bright and early the next day we made the short journey from St. Austell to the Lost Gardens of Heligan. Twenty-one years ago these truly wonderful gardens were rediscovered after their demise and many years of total neglect from their heyday at the end of the nineteenth century. The devastating hurricane of 1990 should have consigned the Lost Gardens to a footnote in history. Instead the discovery of a tiny room buried under fallen masonry in one of the walled gardens was to unlock the secret of their demise. A motto, etched into the limestone walls in barely legible pencil still reads “Don’t come here to sleep or slumber” with the names of those who worked there signed under the date – August 1914. Now the obsession is to bring these once magnificent gardens back to life. And that is just what is happening. We wandered around the 200 acres of the estate for a couple of hours. Here are some of the views that caught my eye, starting with the head of a full-length reclining woodland figure called ‘The Mud Maid’.
﻿ 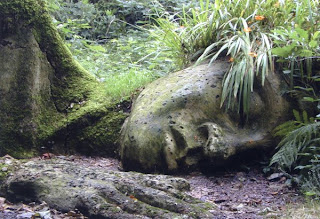 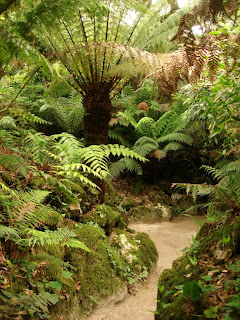 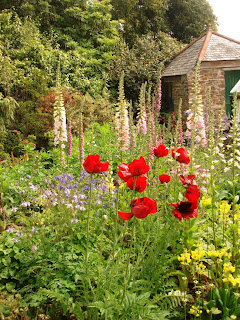 Our little holiday continued with a look into the Shipwreck Museum in Charleston. It has the largest collection of shipwreck artefacts and treasures in the UK. Amongst its many treasures is a room devoted to memorabilia from the Titanic disaster in 1915. Here’s just one of the hoards of ‘treasure’ there.
﻿ 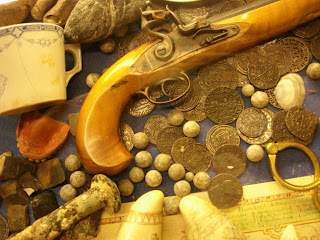 I like trains – especially steam trains. So after a number of attempts to park at Bodmin Station, we finally made it and soon were ensconced in a 1950’s compartment on our way to Boscarne. Precisely on the second the Stationmaster waved his green flag and we were off on a 13 mile round trip, courtesy of the Bodmin and Wenford Railway Company.
﻿ 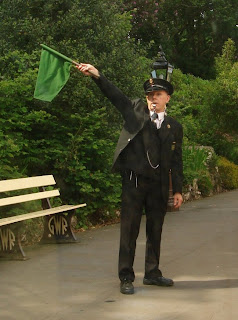 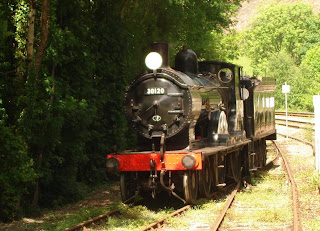 Very good friends of mine live in a village called Bishopsteignton just north of Torquay in Devon, and that became the next port of call. We were to stay with Ian and Jane Stevens – old friends from my Singapore days - for a couple of days.
﻿ 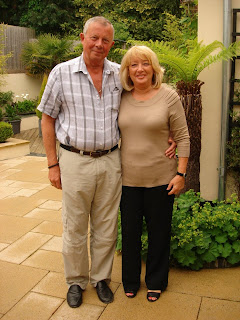 A couple of happy days were spent there with side trips to the seaside village of Salcombe and Dawlish. One evening we joined David and Joyce at their cliffside house in Torquay before having a lovely meal in a nearby restaurant. This is the view looking out to sea from their balcony. 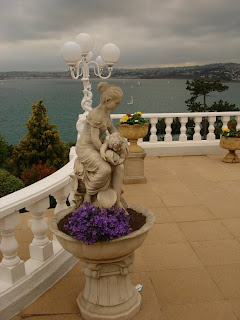 On Thursday, on our way to Wells in Somerset, we drove through tree-lined ever narrowing countryside to visit Fergus in his hideaway in the woods a few miles south of Honiton – but more about that in my next blog.
﻿ 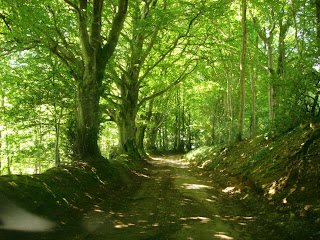 Soon after our arrival in Wells, Sharran, a friend who lives with her husband Mike North (of Dragons Den and Olive Trail fame) picked us up for a home-cooked meal at their home in nearby Wookey Hole. Local strawberries picked that day and Shepherd’s Pie – my favourite meal!
The Hilliard Society of Miniaturists is currently holding its annual exhibition in Wells Town Hall. There, the following morning, being a member of the committee, I was due to attend the Annual General Meeting of the Society. Also to go to the lunch where it was great to meet so many old friends from the miniature world.. I'd arranged to stay overnight at the Canon Grange guesthouse. 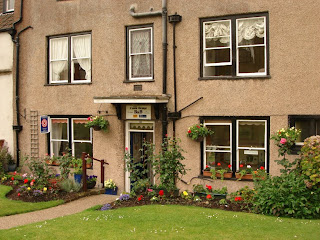 The exhibition has another week to run and I urge anyone who lives nearby to pay a visit. There are many exquisite examples of miniature art – including a number of beautifully painted Russian lacquer boxes. Wells is the smallest city in England, but boasts one of the largest cathedrals in the land. So with this view across the green from the guesthouse, I’ll say goodbye for a while as I make my way home.
﻿ 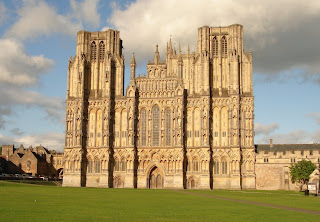