I always think the first sign of spring is when the catkins come out and the willow trees show their first hint of green. This is the view from my studio window and I can see a haze of pale green on the willow on the island.
﻿ 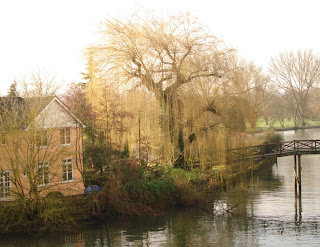 It’s now Wednesday evening and I’ve just returned from London after yet another scan. In the last two months I’ve had a pelvic scan (ugh, that jug of liquid), a PET scan, two Thalium scans, and today a CT chest scan. The Thalium scans last week were the most tedious with a two-hour wait between each. But the PET scan took the longest time – half an hour in a big machine with arms stretched above my head, and no movement allowed. But I did work out how to make time pass more quickly by imagining I was painting the background of a very detailed miniature, as when I’m painting the time seems to fly by at great speed. So by the end of the scan session I’d probably made about twenty thousand tiny virtual brush strokes.

Last Saturday we drove over to Cranleigh in Surrey to visit Paul and Jacqui Eaton. Paul makes the most exquisite small sculptures of animals - one of which won the top prize for sculpture in Florida last month. He is a very talented and creative jeweller. The main reason for our visit was to take my RMS gold bowl to be properly cleaned or re-plated as it was becoming a bit tarnished. It’s a lovely design and is the most prestigious award for miniature painting in the world. 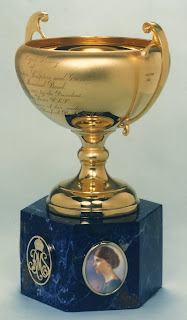 Jane and Brian drove me to the hospital today. Afterwards we found a very interesting Polish restaurant where we had a late lunch, then a quick visit to the new book-shop at the V&A Museum where I left copies of my three miniature books in the hope that they might stock them there. After all I do have a miniature (of Sir David Money-Coutts) in their permanent collection.
We’d parked by a meter for two hours and the expiry time was 5.05. We got there 30 seconds later – just in time to stop a very aggressive parking attendant from giving us a ticket. He scowled menacingly and although he was reaching for his ticket machine he hadn’t actually started writing the ticket so we were able to drive off in double quick time.

Since my last blog I’ve been painting for about 8 or 9 hours a day in an attempt to get all my commissions finished before I go for the operation on Sunday. One of them was a little out of the ordinary. I was contacted by a very charming lady who showed me a beautiful tapestry she’d made for her daughter’s wedding - about 12 by 15 inches and framed under glass with a space left in the middle to attach a photograph of the bridal couple. But disaster struck! Every single photograph taken by the professional wedding photographer had somehow disappeared within his computer – and this was after he’d deleted them all from his digital camera! And no one else had any decent pictures of the bride and groom. My task was to paint a miniature on vellum to fit into the space. I was given a good photograph of the bride wearing her wedding dress on the morning of the marriage, but there was nothing of the groom. So with a combination of snapshots taken while he was skiing last month (being too shy to pose specially) and Google images I managed to collect photographs of morning clothes, cravats and button-holes, then a dash of inspiration to complete the double portrait. Quite the most difficult miniature I’ve had to paint. I hope the bride is happy when she sees the final result – her mother was.


Thank you to all my friends who left messages of encouragement on my last blog. After last Wednesday’s marathon and very tiring day in London with mile long walks between Harley Street (for special heart tests) and the Royal Brompton Hospital for the Thalium series of scans), interspersed with an hour long visit to the Science Museum in Knightsbridge (here’s Stephenson’s ‘Rocket’) ... 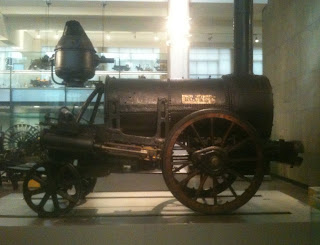 … and a wave at  Sir Winston Churchill in Old Bond Street …
﻿ 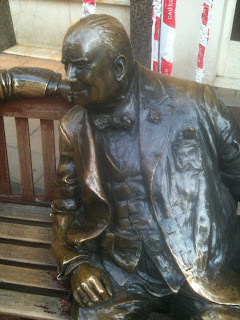 …plus buses, trains, underground trains and taxis, I’m almost ready to laze around in bed after my operation next Monday.