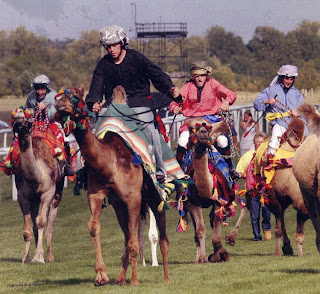 Yes, last Saturday the main attraction at the Henley Show was ‘Joseph and his Amazing Racing Camels’. There’s so much to see at the show – this year held at Greenlands Farm in Hambleden. I’d organised a reserved space for my car next to ring one where four of us took a picnic. As everyone contributed something (Val going overboard with all sorts of goodies, and my young friend making an assortment of delicious pies) we had, as usual, much too much – we could have fed the five thousand! My modest contribution was a few cans of Pimms, flavoured water and nibbles. Despite early rain the weather soon cleared, the sun came out and together with about another 20,000 people of all ages we had a great day.
As for the camel racing, all the animals were more colourful than they were speedy, and Joseph, in his wisdom, seems to have decided that his little 11 or 12 year old would make a good commentator. Well she wasn’t. Her squeaky, know-it-all, voice gabbling on over the races was particularly annoying. I made a little video of one of the races, which I’ll add to this blog, but to spare you the raucous sound of the little angel have substituted (at great expense) part of the theme from 'Lawrence of Arabia'. 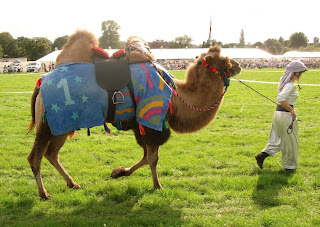 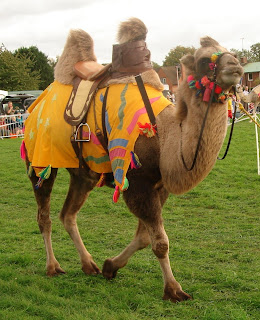 Wandering around the various tents I came across a stand selling bow ties and fancy waistcoats. As I now have a bit of an enlarged tum due to last year’s operation (that’s my excuse – nothing to do with Crunchie bars or doughnuts) I needed a dress waistcoat that fitted perfectly, especially as I’ve been invited to a rather special day in a couple of week’s time, so I chose a rather nice black one decorated with silver stars and moons. It should arrive in time. The grand parade included veteran and vintage cars, ditto tractors, and of course, all manner of livestock.

I manage to lose my camera case (containing a spare battery and 4Gb memory stick) about once a week, Saturday was no exception, so, retracing our steps from the llama pens back to the camel wagon, we eventually found it. Some kind person had hung it over a fence. 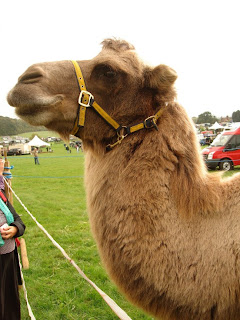 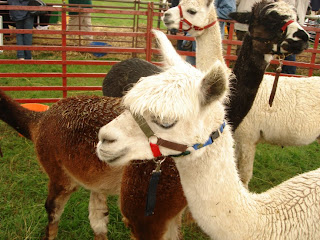 The Henley Show is always a good place to buy Christmas presents. I bought half a dozen from one of the more creative stalls in the craft tent. A good day out was had by all.
﻿ 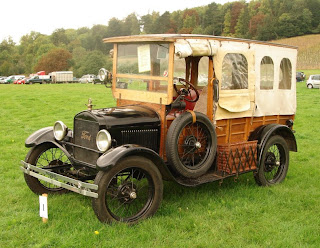 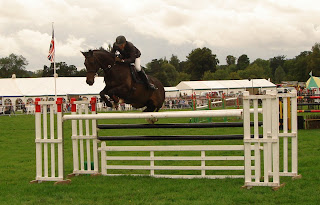 ﻿
Every Christmas morning, on the way to the family, I call in to Bird Place next to Henley Bridge, to have a drink with Peter and Diane Sutherland. For the past 30 years I’ve been greeted at the door by a strange figure. It’s Peter in disguise. From the Mad Hatter and Osama Bin Laden to Lord Nelson and a French Onion seller, he never ceases to surprise me. So the other week I decided to surprise him for a change. Utilising a website called Snapfish I made a 20 page hard-cover book illustrating most of his disguises. He was delighted with his present and promptly ordered 3 more copies to give to friends. (One of whom happened to be Tom Jones, who called into Bird Place the other day). Here’s a couple of pages from the book.

Last Sunday was a very special day. Henley’s Kenton Theatre still needs to raise a further £70,000 to purchase outright the freehold of the premises so at 10.30 in the morning about 120 of us nattily attired guests met in glorious sunshine at the Leander Club for coffee and biscuits. There we were entertained by The Reedy Four - a quartet of jazz musicians - while we waited for our transport up to Temple Island for a lavish £100 a head lunch. 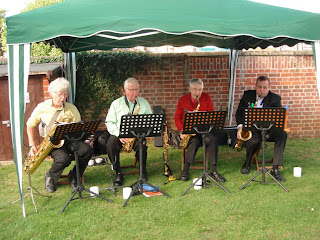 Soon, five of the Regatta’s umpire launches approached us in a ‘V’ formation from under Henley Bridge to take us the mile or so up the river to the island. 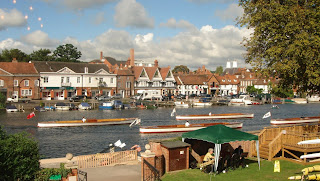 Temple Island was designed in the 18th century by the architect James Wyatt and constructed in 1771. Originally used as a fishing lodge, a statue of a nymph is visible within.
﻿ 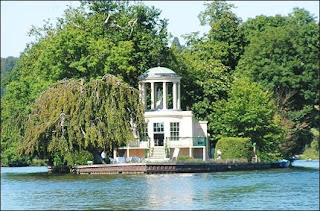 We were greeted upon arrival by a bevy of beautiful girls and a large moustachioed Italian gent. Champagne, Pimms, and other assorted drinks were handed round while we chatted on the island lawn. I knew nearly half the guests and was delighted to meet Hilary Kay again (she’s the antiques expert who appears regularly on The Antiques Road show on BBC television).
﻿ 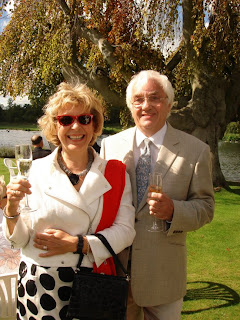 Drifting around the island was a punt containing four parasol-toting singers called ‘Opera Anywhere’ who serenaded us while they lazily glided around the island in the glorious September sunshine. All very romantic. The wind was a bit blowy so the wind noise in the little video I’ve added at the end of this blog competes from time to time with the opera singer.
﻿ 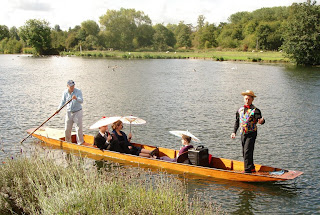 After an hour or so we all found our places in the marquee at the other end of the island. I was at a table with people I’d never met before, some of whom were Australians. And as each table had to take part in a singing competition later in the afternoon the more forceful ‘Sheilas’ insisted we sing ‘Waltzing Matilda’. I had to write down all the words on a menu to avoid making mistakes and ruin our chances of winning the case of wine. To counterbalance the Oz contingent at the other side of the table the Earl of Macclesfield kept pretty quiet.

Several really hilarious cabaret acts were performed on the stage as well as a fruity excerpt from ‘The Importance of being Ernest’ and Wendy Bowsher, the energetic Theatre Managing Director, was given a well-deserved present of a week’s holiday in Cornwall. Then it came to the auction. I had offered to paint a miniature for the highest bidder as one of the main auction prizes. Other prizes were champagne balloon trips, a chalet holiday in France, a golf day at Badgemore for 100 people, a day at Ascot Races and a private cruise for up to 80 guests on the New Orleans paddle steamer. My miniature reached £1,650 and was won by Barry Wood, the husband of Jeni Wood – the mayor of Henley. He wants me to paint his 4-year-old granddaughter.
We didn’t win the singing competition, thank goodness, but then we were competing with the next table, one of whose guests was Bruce Dickinson - the lead singer with ‘Iron Maiden’. 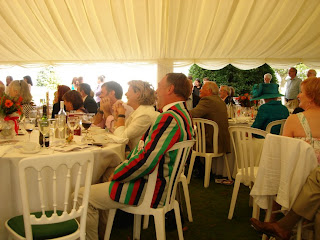 What a great day. So much fun – and talent. Even some of the waiters revealed themselves later in the afternoon to be accomplished opera singers. At about 5pm the Umpire launches were lined up ready to take us back home, and as I clambered aboard I discovered I’d lost my camera case – again! Happily it was found some time later. I think I’ll have to attach it to me by a long elastic band.
It doesn’t sound as if I’ve done much work this week. In fact I’ve spent about 9 hours every day on my ‘Carousel’ painting and have just passed the 300 hours mark. It should be finished in a couple of days.