As I write this I am sitting on a bench looking out over a tranquil pond at Ewelme – a picturesque village a few miles west of Henley. A mallard is quacking and here come three others to join her. There are rooks squawking high in the trees above, joined from time to time by a whole variety of bird life. A trio of wood pigeons call to each other from the surrounding woodlands, and looking out at one of the ducks foraging for food under the water reminds me of Ratty from The Wind in the Willows when he recites his poem about “Up Tails All”. 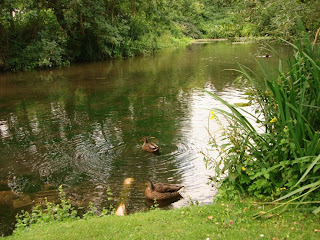 Talking of the river, on Wednesday the Swan Uppers came to Henley. I’ve described them before in a previous blog but this year on a glorious hot and lazy day they marked two little families of swans in the millstream right next to where I live. Here’s a small portion of a video I took of the ceremony.

David Barber, Swan Marker to Her Majesty the Queen – the one in the scarlet blazer with a swan’s feather in his hat – was leading his group of six wooden skiffs, each rowed by four men belonging to the livery companies, Dyers and Vintners. The remaining two skiffs fly the Queen’s flag. Each year I join a little group of enthusiasts at Marsh Lock where we watch the Swan Uppers as they come through the lock. There we sip wine and Pimms and chat to the oarsmen and crews of the support boats. The Swan Upping ceremony dates right back to the 12th century when the crown declared ownership of all swans which were then considered a delicious dish at banquets. Swan Upping’s original purpose was to keep the Royal larder stocked with meat (the birds are now protected by law and it is illegal to capture, injure or kill them). Swan Upping takes five days in all, where all the new cygnets in the Thames from Sunbury to Abingdon are marked depending upon which family they belong to. 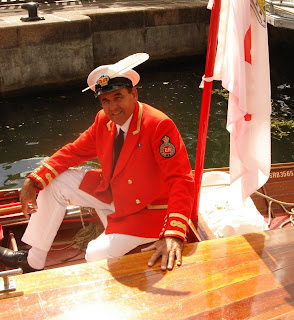 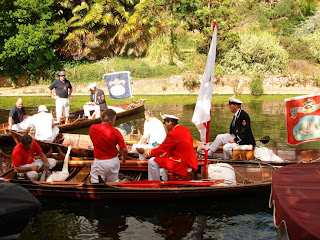 It’s been a busy week for painting as well. On Thursday I completed a miniature of Russ Abbot in readiness for the RMS exhibition in London later this year. 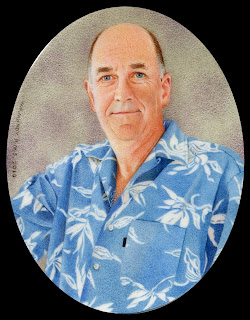 Now I’m halfway through another miniature, this one of a very talented and glamorous Barbadian singer I met at the Henley Music Festival last year.

Talking of miniatures, from time to time I’m commissioned to restore miniature portraits. This week a gallery owner asked me to help him out of a dilemma – a client of his had given him a badly cracked and damaged miniature for restoration. Although an expert in restoring oil paintings, his attempt to restore the watercolour portrait on ivory proved to be beyond his area of expertise. Obviously I won’t mention any names, so without another word I will give you an idea of how I solved the situation by showing the “before” and “after” of the face. 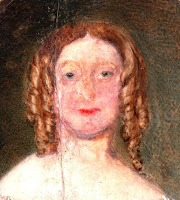 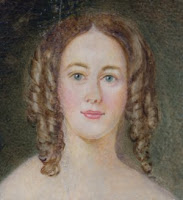 On Thursday I was asked to appear on BBC Radio Berkshire on their hour-long arts programme together with Jane Corry who runs the Norden Farm Arts Centre in Maidenhead. However I nearly didn’t make the show because, foolishly disregarding the instructions given by the lady on my TomTom satnav, I ended up lost in a very congested part of Caversham – way past my destination. Anyway, having phoned the radio producer, with a couple of minutes to spare, I managed to get there in time. With Phil Gayle, the presenter, we covered such topics as the recent gift of a painting by David Cameron to Barack Obama in Washington, to a contestant on Britain’s Got Talent TV show who is suing Simon Cowell for over two million pounds. Jane talked about her school and I related a few anecdotes from my career in art while we both discussed the possible effects of the necessary financial cuts and how they might affect us.

Yesterday, Saturday, we had a big family party at cousin Paul and Jo’s farm in Great Shefford. Another lovely day. About 60 or so were there and everyone brought something. I took Val – she’d made meringues, pies, a trifle and goodness knows what else. My contribution was easy – just wine and a few cans of Pimms. We had a really good day. Jim and Tim organised it and started the day by roasting a whole hog – and very tasty it was too! 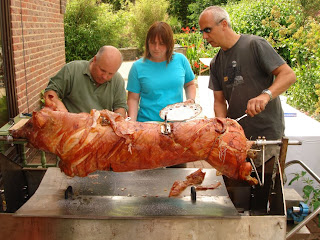 We played skittles in the garden and some of us competed with a small shotgun in the adjoining field where a clay pigeon trap had been set up. Great fun, especially as I tied for first place with my nephew Tim – and he’s a highly qualified police marksman!
Here’s a couple of pictures showing Stew and Louisa with their families. 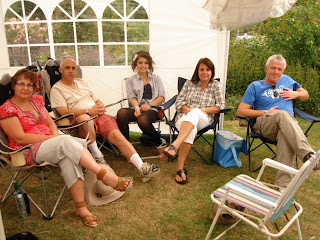 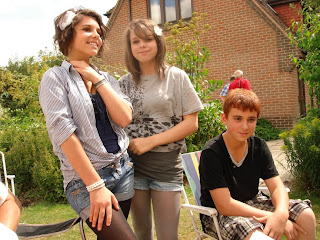 And this photograph shows nearly all the family group - some had already left when the picture was taken.