Floating in a Golden Gondola

I’ve been a bit busy painting and drawing lately, hence no blog for a couple of weeks. But last week, Pat Barton drove us to London to see the musical Oliver at the Theatre Royal in Drury Lane. I’ve always loved both the lyrics and the music of this show so was really looking forward to it. Arriving in the underground car-park in Park Lane I learned something I didn’t know before – if your ticket has been stamped by the theatre when you leave after the show the parking fee is halved. There is also a way to the car-park which avoids the congestion charge. And finally a great guy who calls himself ‘Eveready’ had a little 8- seater car to take us up to Oxford Street free of charge. As I’d suggested we have lunch at one of my favourite London restaurants – Sarastro - in Drury Lane, Eveready drove us all the way there for a small tip. 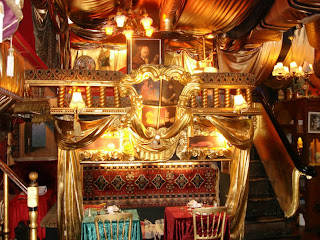 Based on a Venetian theme it’s got to be the most colourful restaurant in London. In the evenings opera singers wander around the tables. We sat in one of the many gondolas overlooking the main dining area - you almost feel you are floating.The food is great too – I had probably the best beef bourguignon I can ever remember eating. Here are a few more views inside the restaurant 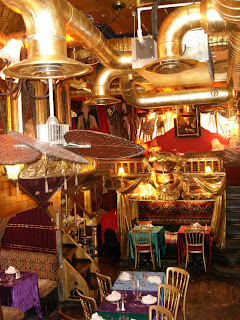 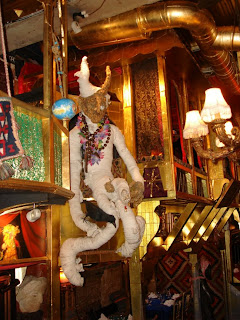 And copper coins scattered over the stone floor 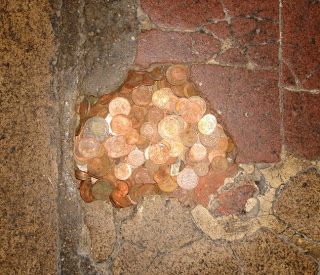 Then just a short walk down Drury Lane to the theatre. What a fantastic show it was. 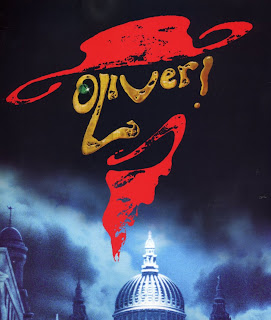 From our balcony seats we had a great view. I’ve never seen such wonderful sets. Being a very large theatre – and I don’t know the correct term – there was as much space below the stage as there was above it, and then more. So the whole of Fagin’s underground den was revealed and later a really three-dimensional distant view of London streets. 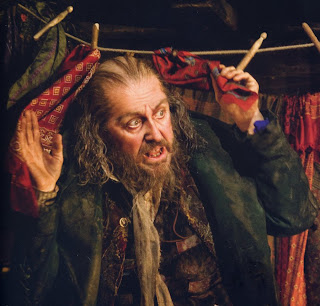 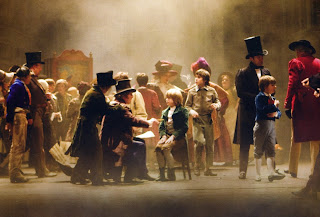 The three miniatures I recently painted for the New York client were held up because of the recent closure of Heathrow Airport (the frames were made in England) but luckily arrived in time for the presentation. It seems that each grandchild was to present his or her own miniature to their grandfather on his 70th birthday. When I receive photographs of the miniatures in their frames, if I can get permission from the owner, I’ll publish them on my blog - you asked for this Mona. Talking about the Icelandic ash cloud and the chaos caused by the closure of Britain’s airspace, I was disturbed to read that it was almost definitely closed under false pretences.
Obviously safety was of paramount importance but the evidence now released shows that the cloud of ash dust was often so thin that it posed no risk. Satellite images indicated that the skies were largely clear. The Civil Aviation Authority’s head of airworthiness, strategy and policy admitted that “it’s obvious that at the start of the crisis there was a lack of definite data, and it’s also true that for some of the time the density of ash above the UK was close to undetectable.” The National Air Traffic Control Service decision to ban flights was based on Met Office computer models, which showed a cloud of ash being blown south from the volcano. But these models should have been tested by the Met Office’s research plane, a BAE jet, but at the time it was residing n a hangar waiting to be repainted and was only able to be sent airborne on the last day of the ban. Now evidence has emerged that the maximum density of the ash was only about one twentieth of the limit that the Government, scientists and aircraft engine manufacturers have now decided is safe. So almost definitely the shutdowns went much to far due to massive over-reaction. But then, what do I know – I’m only an artist.
Paul, Debbie, me, Jessica and Adam

Jessica, a lovely friend of mine who now lives in Bath with her new husband, Adam, visited today so, together with Paul and Debbie, we all had lunch at the Orangery in Phyllis Court. What a jolly time we had. Paul as usual demonstrating even more of his talents – I didn’t know he was a ventriloquist!
I was hoping to film the goslings yesterday as they all hatched out the day before, but they left the nest too soon. I’d seen on of the swans charging around the nest the other day so he probably frightened them away.

Finally, for the past few weeks I’ve been making a book about my brother Bob’s life to give to Val on what would have been their wedding anniversary next month. But I’m an impatient sort of person so when it was completed (all 56 pages) last week I decided to give it to her early. It’s worked out really well so I’ve ordered 4 more copies for Bob’s children. Val said it was her best present ever. Here’s the cover 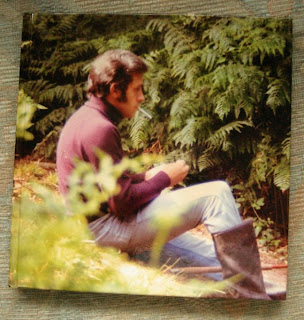 and this is a double page spread of some of his early days. 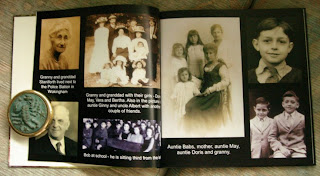