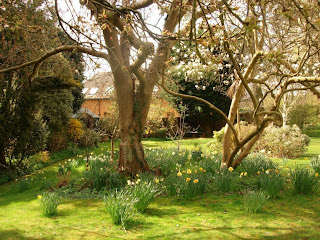 It’s a lovely sunny Sunday afternoon and I’ve just come back from Hampstead after visiting Katie Boyle. I took Val and on the way back as we approached Marlow decided to call in to see Louisa, my niece, and her family. Good timing, as they were just making the first barbecue of the year – so we joined them for a while. We’d chosen to return via Marlow so as to avoid the expected miles of traffic queues along White Hill into Henley. But that turned out to be a mistake as an accident which completely blocked the road at Medmenham meant we had to turn round and negotiate the extremely narrow one-track roads around Fawley Bottom. We soon found ourselves meeting all the cars that had turned round at the other side of the accident. So began a rigmarole of reversing or driving up soft verges to pass other vehicles. The whole thing reminded me of the reading by Gerard Hoffnung called ‘The Bricklayer’s Lament’. I’m sure you’ve heard it, but it’s worth hearing again.
Respected Sir,
When I got to the top of the building I found that the hurricane had knocked some bricks off the top. So I rigged up a beam with a pulley at the top of the building and hoisted up a couple of barrels full of bricks.
When I had fixed the building, there was a lot of bricks left over. I hoisted the barrel back up again and secured the line at the bottom, and then went up and filled the barrel with extra bricks. Then I went to the bottom and cast off the line.
Unfortunately the barrel of bricks was heavier than I was, and before I knew what was happening, the barrel started down, jerking me off the ground.
I decided to hang on, and halfway up I met the barrel coming down, and received a severe blow on the shoulder.
I then continued to the top, banging me 'ead against the beam and getting my fingers jammed in the pulley.
When the barrel hit the ground, it burst at its bottom, allowing all the bricks to spill out. I was now heavier than the barrel, and so started down again at high speed.
Halfway down I met the barrel coming up, and received servere injuries to my shins. When I hit the ground I landed on the bricks, getting several painful cuts from the sharp edges.
At this point I must have lost my presence of mind because I let go the line.
The barrel then came down, giving me another heavy blow on the head, and putting me in hospital.
I respectfully request sick leave. " 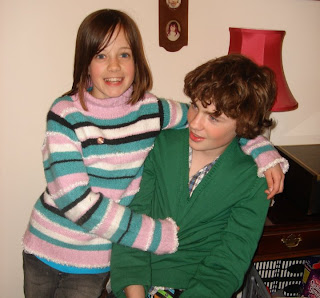 The above picture shows two of the Mundy Tribe! We all gathered together on Easter Sunday for one of our annual get togethers. This time we chose the Plowden Arms in Shiplake for lunch. Afterwards we progressed to Henley and as I had saved hundreds of coins during the year we were ready for the ‘money game’. This is where I scatter and hide coins all over Val’s garden and at the word go the children – and I now have nine great nieces and nephews – race around gathering as much money as they can. When their parents were little and I visited England on leave they would be the recipients. This time they helped hide the money. Cousin Jim and his two grandchildren joined us swelling the numbers a bit. Here is a picture of all of us under Val’s apple tree. 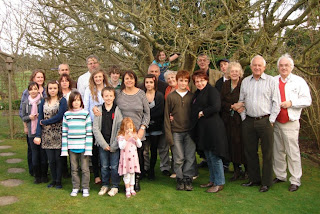 This has been a very busy week. I completed two pencil drawings for a client and even painted a picture of stained glass as a possible Christmas card - but now it’s finished it looks so unlike a painting that I may do something completely different. After all I have plenty of time. 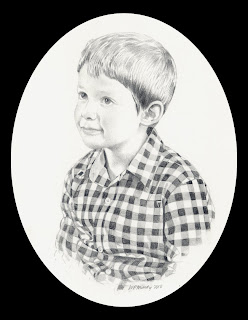 The ash from the Icelandish volcano has really caused a tremendous amount of disruption all over Europe with cancellation of all flights. The three miniatures which are to be a 70th birthday present for a client in New York – they are of his grandchildren and are framed with gold, diamonds, sapphires and rubies – are still with the jeweller in England. As the birthday deadline is fast approaching they may have to go by sea! Cousin Paul was stuck in Vienna but with a combination of trains, cars and ferries has managed – several days later - to get home. The last I heard he was on the road just outside Folkestone enroute to Heathrow airport where he will pick up his car. Hope the car park is open as there are signs above the motorways saying ‘Heathrow Airport Closed’. That’s a first!
Having now cleaned my big boat – with the generous help of my neighbour’s power-hose to get the grime off the outside, and a young friend who helped clean the inside, I should be ready to use it now. But the boatman still hasn’t replaced the batteries, changed the plugs, and done all the other things that need doing to recommission it. Still my little wooden dinghy is ready to use – apart from a leak in the bow, which isn’t too bad as long as I sit in the middle of the boat and don’t rock around too much. If it works I’ll post a little video of my boat in the millstream. It may show a blank on some computers – if so click here to view it on YouTube.

Although the film ‘Cemetery Junction’ was panned by the reviewers, I really enjoyed it. It was purported to be shot around Reading, as that is where the original Cemetery Junction is located. But in Reading the junction is the site of a massive graveyard, whereas it is a railway junction in the film. Good fun.
This amused me: An Australian publisher has had to pulp and reprint a cook-book after one recipe listed “salt and freshly ground black people” instead of “black pepper”! The reprint cost £12,000.
For those of you who asked here is a photo of me at work in my studio. 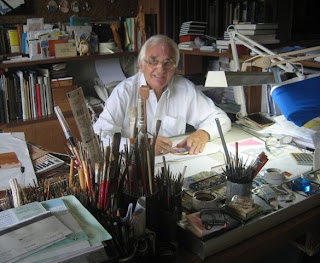