The lovely Joanna Lumley – who greets me every time I open my computer in AOL - was performing at the Watermill Theatre in Newbury last Wednesday.

Cousin Paul had invited me to accompany him to the show. This wonderful little theatre seats just 220 people. It’s located on the banks of the river Lambourn in West Berkshire. A mention was made in the Domesday book of a theatre on the site. For hundreds of years the Watermill produced corn and paper, then in the early 1960’s was converted into a theatre. 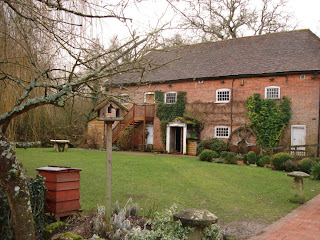 Joanna Lumley was great – so elegant and friendly. She talked about her time alone on a desert island when she made a pair of shoes out of her bra (informing us that her breasts were the same size as her feet!). People in the audience were encouraged to ask questions as she described her time in the Avengers TV series, the James Bond film, and of course the hilariously funny ‘Absolutely Fabulous’ TV series. She talked about her wonderfully uplifting visit to the Northern lights in the Arctic – I remember it clearly. A truly great afternoon. 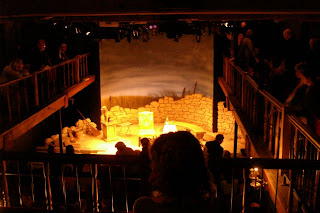 Inside the Watermill Theatre

When we got back to Paul’s house he spent some time becoming a follower on my blog and downloaded a picture of one of his prize bulls as his identification symbol. It won’t be long before he starts his own blog as he’s already drafted out his first. Later in the evening we were joined by Jo and went for dinner at a very friendly pub in the nearby village of Chieveley.

I went for the annual check-up at my optician the other day – my records there go back over 40 years. Luckily my one good eye is ‘super-duper’ and does the work of two. In fact I can still read the very smallest point size (about 2 pt.) on their chart. As I regularly have an ‘Optimat’ test – which photographs the back of the eye - it was interesting to see that the very tiny beginnings of a cataract hasn’t moved or grown over the past ten years. However the optician said that if it does ever become a problem, a mere 20 minute procedure would replace the lens and not only solve the problem but would almost definitely cure my astigmatism. Thank goodness we are living in an age of such rapid progress in medicine.

Over the past three weeks I’ve painted three miniature portraits for a client in New York, and am very much looking forward to seeing them in their frames, because they will be housed in the most spectacular solid gold and coloured enamel ‘Faberge styled’ frames which will cost about twenty times my fee for the portraits! They are to be a present for a rich man’s 70th birthday.
Last night I was watching ‘Priceless Antiques’ from the Antiques Road Show on television and was intrigued with one of the objects.

Just a pencil you’d think – that is until the owner showed how the rubber (or eraser for the benefit of my American friends) at the end of the pencil unscrewed to reveal a tiny compass. And inside the shaft of the pencil was a complete rolled-up map of Germany, printed on the thinnest of tracing paper. These pencils were smuggled in to our prisoners of war in Germany during the Second World War, and with just these two items an escapee could hopefully find his way out of the country to freedom. This reminded me of a truly intriguing story I read about recently. Again, during the war, when devices were sought to facilitate escapes from the prisoner-of-war camps, Waddington, the makers of the board game ‘Monopoly’ was approached to help. As ‘games and pastimes’ was a category allowed to be inserted into CARE packages sent to prisoners of war by the International Red Cross, under the strictest of secrecy in a securely guarded workshop in the grounds of Waddington’s, a group of sworn-to-secrecy employees began mass producing escape maps keyed to each region of Germany or Italy where allied POW camps were located. MI5 had the idea of printing escape maps on silk. Silk because it is durable, can be scrunched up into tiny wads, makes no noise, and can be unfolded as many times as needed. 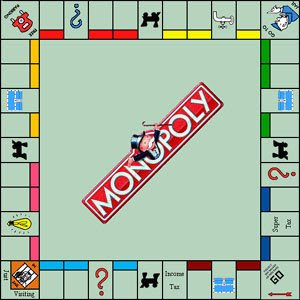 Hidden inside Monopoly playing pieces these maps were augmented by a small compass, a two part metal file that could be screwed together, and useful amounts of high denomination German, French and Italian currency. These were hidden within the piles of Monopoly money. Air crews were advised before taking off on their first mission, how to identify a ‘rigged’ Monopoly set – by means of a tiny red dot, located in the corner of the Free Parking square. Of the estimated 35,000 Allied POW’s who successfully escaped, an estimated one third were aided by the rigged Monopoly sets. Everyone who did so was sworn to secrecy indefinitely, since the British Government might want to use this highly successful ruse in a future war. In fact the story wasn’t declassified until 2007, when the surviving craftsmen from Waddington’s, as well as the firm itself, were finally honoured in a public ceremony.