I had a call from BBC Radio Berkshire earlier this week. Anne Diamond was doing a ‘History of the World’ programme direct from Reading Museum and was asking for people to talk about their oldest possession or any object that might relate to Berkshire. We learned that Reading Museum’s oldest item was 3,000 year’s old, however I happen to own a 6,000 year-old piece of pottery! 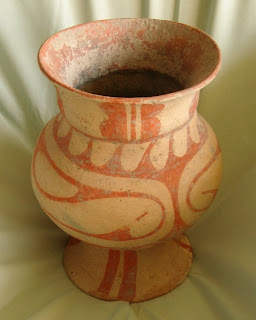 When I lived in Thailand one of our clients, who happened to be a leading expert on Asian antiquity, commissioned me to make a drawing of a very valuable Khymer figure he owned. It was missing both arms and my task was to draw it complete with arms. This I did after much research on the type and shape of limbs this particular figure would have had. Instead of paying me in cash I was given this 12 inch high Ban Chien earthenware pot. Ban Chien is a small village located somewhere in central Thailand and in the ‘60’s hit the headlines when a number of pieces of earthenware were unearthed there. Subsequently they were carbon 14 tested and were found to be around 6,000 years old, which resulted in alterations to the history of Asia . This caused much excitement in the country, leading to King Bhumipol Aduladej banning the export of all items found in Ban Chien. (Don’t ask how I managed to bring my piece home.) By the way, this is part of the drawing I made for the collector. 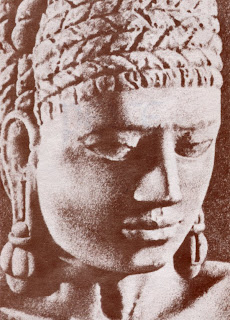 Anne Diamond became very excited about my little piece of history, speculating about the age of the last person to handle the pot before it was lost underground all those years ago. We also talked about my time as a biscuit tin designer in Reading as the Reading Museum have a number of my designs on display there. She found it hard to believe that my starting salary in the 1950’s was less than £1 per week. It wasn’t much even then – but I was an apprentice after all.

I popped in to see Paul and Debbie on Tuesday to return Paul’s sound system I’d borrowed - good timing as the family were there, and being Shrove Tuesday, Debbie and her father Pat served us all with delicious pancakes.

Tom Campbell, the champion of the ‘colours’ evening last week challenged me to a few games of snooker on Thursday. He beat me of course, but the practice was useful.

Last night together with Val and the lucky folks of Henley who were able to get tickets I went to the best show I’d seen for years. Pam Ayres was performing at the Kenton Theatre. It was absolutely fabulous! 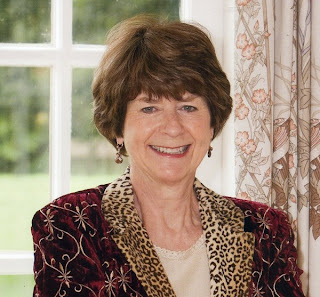 For those of you that may not have heard of, or seen, Pam Ayres, she writes and recites poetry. Not just poetry but the funniest. The whole evening was hilarious. She had us in stitches as she told us tales of her break into the limelight when she won Opportunity Knocks’ – a TV talent show in the fifties, and how she came to write a poem about her young son’s thirteen-nil defeat at his first football match. Her description of how her mother extracted fat from within a carcass of meat had Val almost wetting herself with laughter next to me as it reminded her of her own childhood when her mother did exactly the same thing. What a great talentPam Ayers is. She also donated a large part of her fee to boost the Kenton Theatre’s coffers.

I was so inspired and uplifted by such a happy evening that when I got home I penned a few verses till I fell asleep around midnight. They’re not very good but are dedicated to a few of my faithful followers.

AN ODE TO MY BLOGGING FRIENDS

As a blogger I write every week
Being shy and so terribly meek
I’m sometimes quite boring
So stop that rude snoring
And wake up and have a quick peek.

With comments from friend RG9
Without them I’d probably pine
And Bluebells who’s clever
Whatever the weather
In Stateside or tropical clime.

And artists like Wes and Rachelle
Friend Mona with talent as well
And dear little Pootle so quiet and discreet
She ponders, you know, with never a tweet
Must go now my friends, there’s the bell