It really has been a white Christmas this year – the first for a long time. The snow covered about six inches around Henley and as few of the roads were salted or gritted, driving became a bit hazardous from time to time. Coming home from Jack and Norma’s party last Sunday afternoon I discovered, when turning out on to the dual carriageway, a number of cars sliding sideways down the hill. I had no alternative but to join them but managed to stay relatively safe by using the lowest gear on the slope. But the landscape was beautiful. This picture is of the road just before you turn into the courtyard of my flat. 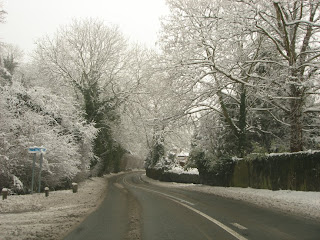 On Christmas Eve I tramped through deep snow to visit Nigel and Tracy who live in the lock-keeper’s house at Marsh Lock. 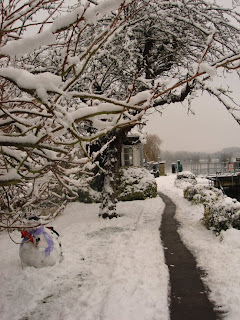 Nigel introduced me to the new assistant lock-keeper. He might feature on their next year’s Christmas card. 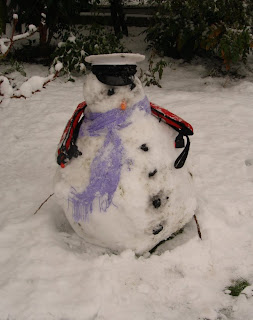 And this warmer snow man nestles in the fireplace at Bird Place. 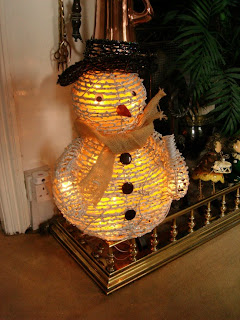 Every Christmas morning I call in to Bird Place, the lovely Queen Anne home of my friends Peter and Diane Sutherland. For the past twenty years, as I arrive, Peter emerges from the front door dressed up in some sort of costume. These have varied from, for example, a cutthroat pirate, A French onion seller, Osama Bin Laden, General Gordon, to this year’s character: 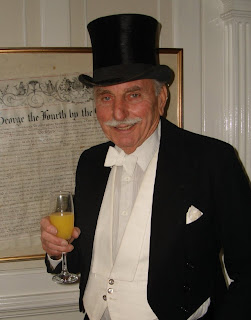 Stewie, one of my nephews and his family were staying with Val for Christmas so I spent it with them. Louisa visited with her family in the morning so we could spend some time unwrapping presents. Here’s her youngest, my great-niece Kate. 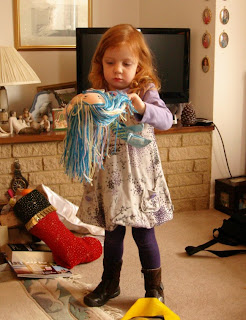 We had a lovely day. Stewie and Tina have three lovely children, Annabel. Genevieve and Matty. The giant turkey was fabulous, as was everything else. Val made all the mince pies, Christmas pudding, brandy butter, jellies, etc. etc. and most of the vegetables were from her garden. And Genevieve and Annabel made and decorated the Christmas cake. Yesterday, Boxing Day, we all went for a walk through the snow and extremely slippery ice by the river at Marsh Lock ending up at the River and Rowing Museum for very welcome steaming hot chocolates. 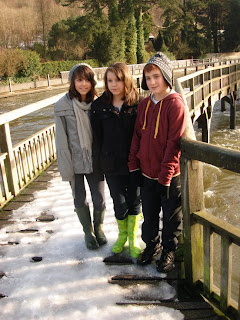 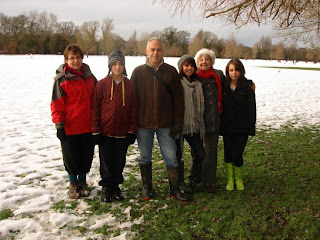 Here’s the view across the river towards my flat - it’s hidden behind the boathouse but you can just make out my snow-covered boat in the bottom left-hand corner. And the other picture is the view of the Millstream from my back garden 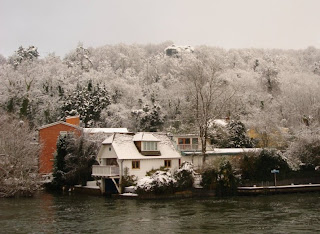 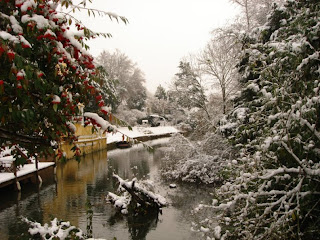 I’m going to end my last blog of the year by relating the latest ridiculous piece of political correctness to emerge this Christmas. British Transport Police very sensibly decidedly to alert the public to the fact that they would be increasing the number of police on duty over the Christmas period. The slogan on the poster was quite clever and was to be ‘Christmas Presence’ a pun on the word ‘presents’. But, can you believe it, the marketing manager – a harridan called Alison Lock – decided that “some people would feel excluded by the use of the word ‘Christmas’, so she ordered it to be changed to ‘Holiday Presence’, which obviously made nonsense of the slogan. How blinkered can one be?. These stupid people who make such ridiculous decisions should get out more and meet the people who they think might be offended. They will soon find out that, not only are they not offended, but in fact are insulted and feel patronised.

So on that note here’s wishing all my followers and readers a Very Happy New Year.