I love warm colours and as this autumn has been especially kind - almost tropical - the myriad of red, yellow, orange and golden tints in the countryside is wonderful to behold. I popped in to see my friends Peter and Diane on Saturday afternoon. Their house is right next to the river by Henley Bridge so I wandered down to the creek at the bottom of the garden and took a few photographs. Here’s a couple: 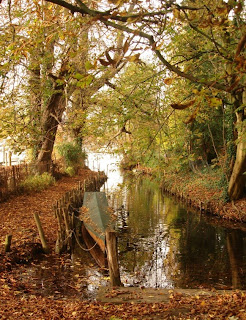 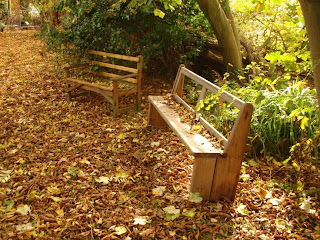 I haven’t done much this week, but Thursday was my birthday, so in total contrast to last year (when I ‘made merit’ at the start of the day by rising at 5am to feed nine saffron-robed monks as they sauntered down Sukhumvit Road in Bangkok) Dee and Bill had organised a lovely birthday dinner party for me at their home in Henley. And what a nice evening it was. Just twelve of us enjoyed pink champagne and a gorgeous Indian meal. Chris Hollis was there - he’s currently appearing on ‘Strictly Come Dancing’ on BBC TV and partners the professional dancer Ola (she who wears the skimpiest and sexiest of costumes). Chris is the sports presenter on Sky in the mornings and has to get up at 4am, so to follow this at 10am with about 9 hours rehearsal at the dance studio must be particularly tiring. But he survived last night and didn’t have to face the dance-off. 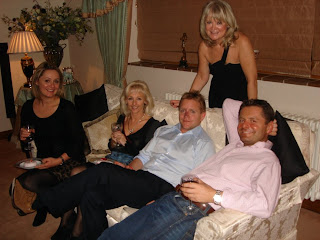 Party friends
After nearly sixty years of shaving the old-fashioned way with lathered fingers I have now entered the elite group of men who lather their faces with a brush before shaving. So I was delighted when Brian and Jane presented me with a very smart badger shaving brush for my birthday present – I’m treating it as a life-changing event!

It’s been a pretty crap day today. Woke up to incessant rain - then at about 8 this morning the power went off. It came on about an hour later so I reset all the clocks, microwave, cooker, answer phone etc. Of course the power failed again ten minutes later. I think I’ll wait till later before doing the rounds again. Somehow the power cut lost my setting for Radio Berkshire just as I was listening to Debbie’s programme and when it returned I was subjected to a full half-an-hour of rubbish music (thinking Radio Berkshire had lost power too) before Paul phoned to put me right, and I retuned the station!
But the good news is that about ten minutes ago I received a nice email from America. It seems I’ve won the award for ‘Best Traditional Portrait’ in the upcoming Miniature Art Society of Florida show. It’s of Jane. 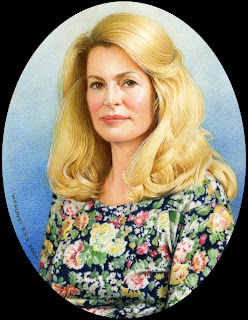 Felicity and Fenwick invited me to dinner last night. They‘ve just had a new - and expensive - new Sky HD system installed, but couldn’t make it record, or play high definition. Could I help? It was pretty obvious why the HD wouldn’t work, as their television set is over ten years old and in no way HD ready. Because of this it wouldn’t record either. What makes me cross is that the Sky installer assured them it would all work perfectly, when he knew full well it was impossible.

My friends think I’m daft because I’ve already printed nearly three hundred Christmas cards and have addressed all the envelopes. Same thing with presents – half are wrapped already. I wanted to get all this done early this year so I can fully absorb myself in painting over the next few months. I’m just about to start on an autumn scene as soon as I can figure out how to show a little view of St. Mary’s Church peeping out in the distance between the trees. I’ve just realised Radio Four is on in this room, Radio Two in the bedroom, and Radio Berkshire on in the living room. – all at the same time.

Last week I wrote about a supermarket querying the age of a shopper when she attempted to buy a greetings card with a picture of a wine glass on it. Well, they are still at it. This time it’s Asda’s branch in Aberdeen. They refused to sell a customer two individual lemons. Why? It seems it’s Asda’s policy to 'protect the public' by not selling individual lemons because local yobs have been known to throw lemons at people. Lemons in packs of ten can still be bought because to quote the store ‘They are smaller and less dangerous’. Incidentally the customer is seventy years old!
By the way, if you don't already know, you can enlarge any of the photographs above by merely clicking on the image.