When 21-year old Emma Sheppard reached the checkout at her local Tesco the other day she was asked for ID. Why? Because the checkout girl was holding a pack of teaspoons Emma had bought. Apparently the UK’s Criminal Justice Act makes it an offence for anyone under the age of 16 to be sold knives, blades, razors, axes, or any sharp item, which could cause injury. OK, I agree with the thinking, but spoons? In the end Emma wasn’t allowed to buy the spoons, as it seems Tesco didn’t want a mad woman racing around the store threatening to stab people with her spoons! 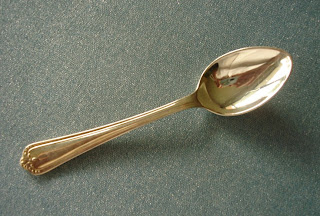 A dangerous weapon
On Tuesday evening at dinner with my cousins Paul and Jim, I related this story. Jim then said he was stopped at Heathrow Airport recently for the same offence. Not because he’s under age (being just a bit younger than me) but because it seems he was carrying an offensive weapon. When Jim remonstrated and said they were merely a small set of desert spoons he was told that he could easily file them down to a sharp point and kill or injure a fellow passenger! File them with what? His teeth!

My dentist has a little art gallery on the ceiling of his torture room. (I shouldn’t say that because he’s a very good dentist and never hurts me). The main picture is a full size Giclée print of my Swan Uppers at Marsh Lock painting. It contains about 50 characters, which should help patients forget what’s happening in their mouths while they count them. (I suggested to Robin, my dentist, that he gives a free consultation to the first person to either guess the correct amount or to identify how many people I’ve painted twice).
On Sunday – nearing the end of the Henley Literary Festival - while walking up to our Town Hall to hear Carol Thatcher and Stanley Johnson talk about their lives, I chanced upon these beautiful Harley Davidson machines adorning the town square. 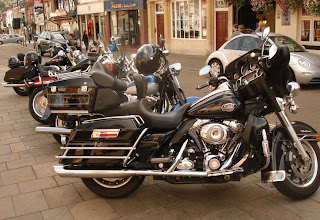 Carol Thatcher was hilarious. She gabbled along, hardly pausing for breath, and gave a very exciting glimpse of family life in 10 Downing Street when her mother was Prime Minister. She answered all the questions from the audience with total honesty and real humour.
Stanley Johnson (father of London Mayor Boris Johnson) followed her. What a superb raconteur he is! Regaling us with tales of his life both at home and abroad, I was particularly amused with one of his stories about his youth. Being a little shy of the opposite sex he asked his best friend (a bit of a roué it seemed) how to chat up girls – with a view to enticing them into bed I gather. “Find out what they like and then profess to like the same thing,” his friend said. “For example, if she says she likes apples, tell her you like apples too. Then follow up with – shall we go to bed!” Stanley thought his was a good idea so when he met a girl he fancied he said, “Do you like France?” She said she did. “And do you like Paris?” he added. “Yes I do,” she replied. “Well will you come there with me for the weekend?” said Stanley. To his surprise she said she would. So off they went, and when they got there they found a little café where Stanley ordered a bottle of wine and told her to stay there while he found a hotel. A few streets away he located a small hotel where his only dilemma was whether to book one room with two beds, two rooms, or best of all one room with a double bed. Having booked the latter he retraced his steps to the café. But couldn’t remember where it was! So the poor girl was left there, as he never did find it again. About 15 years later he chanced upon the girl, whose first words were, “And where did you get to?”
Here’s the cover of his book. I bought a copy and hope it’s as hilarious as his talk was. 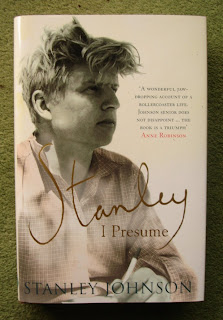 Talking of books, I’ve just received my copy of ‘Hero of the Fleet’. This is William Stone’s autobiography and contains a reproduction of the miniature I did of him, as well as several quotes of conversations I had with him. One of which was soon after my teeth implants were made in Hungary. I asked him if his teeth were his own, and was very impressed when he said they were (he being about 106 at the time). But his next sentence made me laugh out loud. “I know they’re mine because I paid for the buggers”, he said. Sadly William died this year, as did Harry Patch and Henry Allingham – the last three survivors of the First World War. 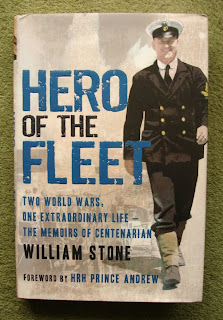 Another book came my way last week. This one is called ‘The Panda and the Prince’ and traces the story of the panda and how it became the symbol of the World Wildlife Fund.. The author used the drawing I did of Prince Philip a number of years ago at Buckingham Palace (he’s the Prince referred to in the title) in the pages of the book. 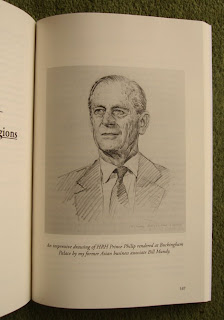 Also within the pages is an old photograph of me with a few of our top executives, just after we alighted from a helicopter in Hong Kong in the 70’s. I’m the slim character on the left, by the way. 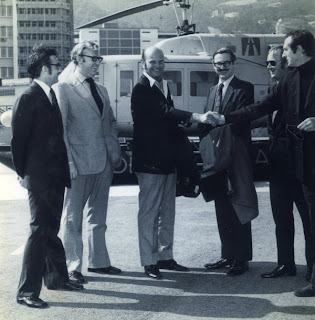