The Fly who Escaped Electrocution - so far!

It’s been a very busy time lately – now that I’m just about back to full health I’m painting furiously – up to 10 hours a day. I finished ‘The Stationmaster’ a couple of days ago. Now I must get back to painting my Christmas card as soon as Anna, who’s agreed to model the face of ‘The Snow Queen’ can come over to pose. 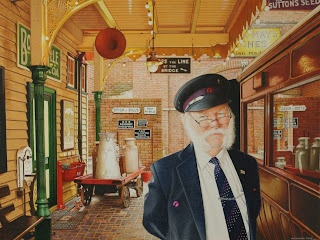 Watercolour 'The Stationmaster'
What a varied week I’ve had – apart from painting. Last Sunday at midday I joined about 300 other guests at the opening of the Upper Thames Rowing Club’s new boathouse. Sir Steve Redgrave CBE performed the opening ceremony and arrived together with Justin Sutherland sculling a double skiff – an unfamiliar craft for the famous Olympic multiple gold medal winner. I don’t think he liked the skiff that much as, unlike a racing craft, the rowlocks have no lock and the oars consequently slide a bout a bit. It was a lovely afternoon and I met many of my friends amongst the great and the good of Henley. A long queue for the hog-roast – but worth the wait. 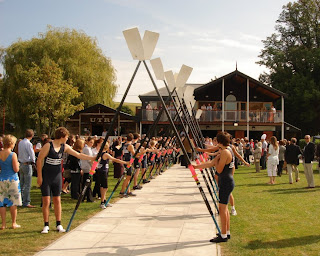 The Welcome Arch of Oars 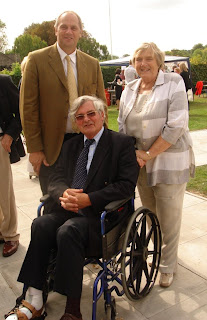 Later in the afternoon I made a quick turnaround at home to change out of my blazer, and to write an obituary of Donald Hamilton-Fraser RA for our parish magazine. Then on to Mill Meadows where Val, Louisa, Stew. Tina, Tim and Lynn were sprawled on the grass by the river with an assortment of great nieces and nephews enjoying the sunshine. My new ‘Flip’ video camera was put to good use when I filmed some of the children on the roundabout as they tried to eat ice-creams at the same time. 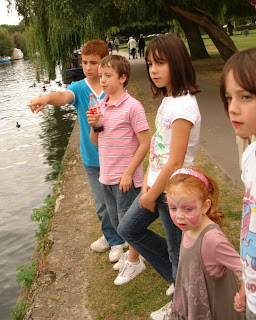 The children by the River 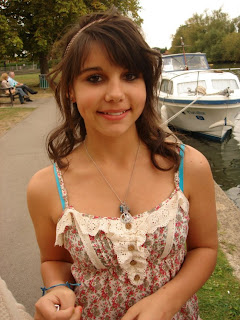 After dinner in the early evening at Val’s with Stew and Tina and their children I made a hurried exit at 6.30 to join Liz, the Mayor of Henley, at the Old Fire Station Gallery for the opening and private view of the Lions Club annual exhibition. Four of my paintings were on display. Who knows, I might even make a sale.

Paul Daniels and a film crew descended on me last Friday. They are making a pilot for a proposed TV series of films with Paul and Debbie cruising down the river in their electric canoe, stopping at various locations. After visiting our local theatre, the Kenton – where not surprisingly they didn’t encounter the ghost of Mary Blandy – Paul performed a few magic tricks to an admiring group of students in the market square. They then all came to me by boat where the crew filmed me painting, and talking about painting, for about an hour. Unfortunately the weed in our Mill Pool was hiding just under the surface of the water causing ‘The Lovely Debbie McGee’ to become entangled in its embrace for a while, much to Paul’s frustration. 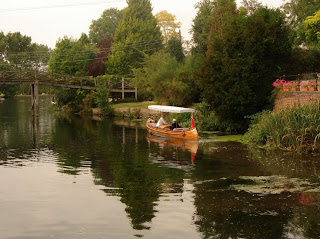 Stuck in the Weeds

Later in the evening Jilly and I went to the Wycliffe village hall in Wargrave to see Paul’s magic show. Although I’ve seen many of his illusions before I still can’t figure any of them out. At one point in the evening I thought I’d sussed his levitation trick, but was hopelessly wrong. Here’s a photo of Paul and Debbie just before he ‘removed’ the head of his doctor with his guillotine 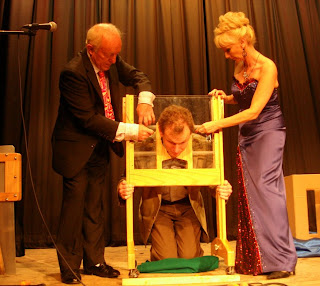 ""Off with his Head!"
Two of my blog followers came together for the first time last Wednesday. (They became cyber buddies during my recent illness.) Bluebells was met by Pootles when she arrived at Twyford station. I took them both out to the Orangery at Phyllis Court before P took B for a drive in the countryside.

Somehow BBC Radio Berkshire have got the idea that I’m good for interviews when the subject of the day is bereavement – especially when young children are left motherless or fatherless at a young age. They called me again the other day to be interviewed by Sarah Walker. This was the third (and I might say, last) interview I’ve given over the past year about my own experiences when a young child. Incidentally I’m known as ‘Bill from Henley’ at the BBC.

I mentioned my old friend Joanna who’s visiting from Vienna on my last blog (when she got lost in Reading). We had a much happier time on Thursday last when she invited Jane, Brian and me for a delightful lunch in a swanky, but picturesque, restaurant in Amersham. I was intrigued when the coffee arrived to see that every sugar knob in the dish was individually wrapped in cellophane. “It’s a new European Health and Safety directive.” they told us. Maybe this is one of the EU’s more sensible regulations as public pots of sugar, peanuts, crisps and the like are so often fingered by all and sundry. 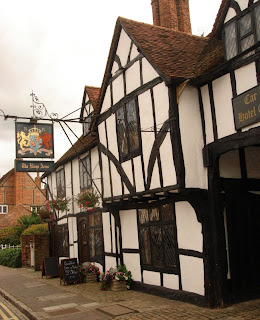 Having lived abroad for such a long time I made many friends there, so it’s always a pleasure to meet up again from time to time. Yesterday Jack Bygrave turned up – over an hour late because, like Joanna, he’d got lost in Reading! (Even I get lost in Reading from time to time – ways out are so badly signposted.) After chewing the cud, so to speak, over a sunshine lunch we played a game of snooker at Phyllis Court. He beat me as usual, but not by such a big margin as he did last November in The Tanglin Club in Singapore - where he and Eileen, his wife, live.

I was watching a television programme about volcanoes the other evening with a young 30-year old friend where I found the music sound-track virtually drowned out the commentary most of the time. I’ve noticed this often these days. Yet my friend said she could hear the commentary perfectly, and was hardly aware of the – to my mind - deafening music. Is this an age thing? Are the young so used to loud music that they somehow tune it out when it’s played under soundtracks?

I’ve been plagued by a fly lately, and am convinced that it’s a reincarnation of one of my dear departed friends. It just won’t leave me alone and follows me from the bathroom to the kitchen, and on to the living room and the bedroom. I’ve sprayed it with fly killer (sorry whoever you are) and swatted it with one of my many fly swatters, but it still lives!
However my young friend gave me an electric killing machine yesterday. In the shape of a small tennis racquet, by pressing a couple of buttons together, upon contact with the offending insect it instantly electrocutes them! I tried it on myself last night, fool that I am. It gave me quite a shock. But the fly remains in hiding. I’m convinced he or she is still lurking somewhere waiting for the batteries of my machine to wear out!