Well I’ve finally started painting again – it’s a bit difficult to work for 8 or 9 hours a day as normal but I’ll get there soon I’m sure. Six miniatures are now packed and ready for submission to the RMS next Sunday. Averil and Pat have kindly offered to take them up to London for me as I’m not able to drive for another two or three weeks.
People are so kind. Yesterday Diane and Peter Sutherland invited me to lunch in their summerhouse by the river at Henley. We are in the middle of a heat wave right now so it was very pleasant to watch all the river craft gracefully gliding by. I also picked up the miniature I’d painted of Diane recently as I want to include it in the London exhibition. 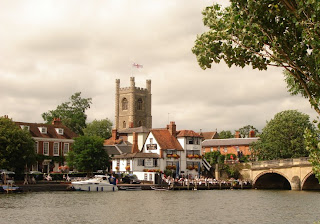 Henley Bridge from the Garden 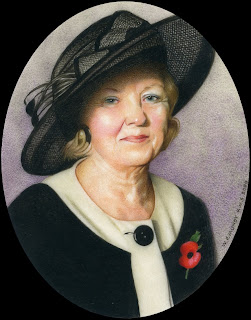 I’m spoiled for friends - Jilly came at 4 and drove me to Phyllis Court for tea. We didn’t stop long as, apart from too many wasps hovering around, I wanted to have a walk to the lock. Nigel was on duty so for about half an hour I paced up and down with him as he operated the lock to let the boats in and out. He and Tracey keep chickens, and I enjoyed some of their freshly laid eggs last night after a marathon time watching the 3-hour King Kong epic on TV. I spent today writing an article for a new book on miniature painters that Wes Siegrist is compiling for publication in the USA. Apart from a couple of photographs of my miniatures he wants a photograph of me in my studio. (That’ll have to wait a while until I look a bit less haggard!)

It’s a very sunny Sunday afternoon right now and I’m gazing out of my studio towards the river. A large crested heron is perched on the wooden bridge, occasionally flapping down to the water to retrieve its dinner. It must have incredible eyesight to be able to locate fish under the water – maybe Heron's eyes are fitted with Polaroid lenses. Possibly you can just make out the heron in this photo. 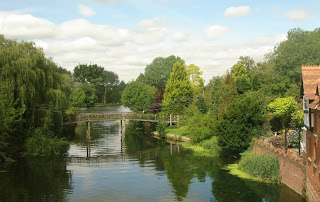 Wish I was able to take my rowing boat out as the weather is perfect and the river looks mighty inviting, but having asked the surgeon what I can and cannot do at this stage of my recovery, I’m not allowed to row, drive or bowl - dammit! At least I can go to the bowling club tomorrow evening and watch. But I will be allowed to play in a snooker match next Thursday at Phyllis Court- as long as I don’t lean across the table and damage my stomach ‘wound’. (Can’t have the stitches coming adrift). I’ve been given 6 months to get back to normal – I’m aiming for 6 weeks instead.

Here in England we are becoming a real ‘nanny ‘ state. I could hardly believe my eyes the other day when I read about a Government sponsored certificate issued by the AQA (Assessment and Qualifications Alliance). This is entitled ‘USING PUBLIC TRANSPORT’ and states that to qualify for the certificate the student has demonstrated his ability to:

● Walk to the local bus stop
● Stand or sit at the bus stop and wait for the arrival of a public bus.
● Enter the bus in a calm and safe manner.
● Be directed to a downstairs seat by a member of staff.
● Sit on the bus and observe through the windows.
● Wait until the bus has stopped, stand on request and exit the bus.

The mind boggles, doesn’t it? What are we coming to? Another thing – I’m sure we are all fed up to the back teeth with the complexity of airport security and rules. Here are a couple of the latest examples: Fisherman Mick Bell was stopped at Heathrow for carrying a lifejacket, which he wears when fishing in deep waters. The security official said the small CO2 canister used to inflate it could be used to fire a weapon on board the aircraft. “No problem,” said Mick, “There are spare canisters in the lifejackets under every seat on every plane. I can borrow one of those!”
68 year-old Fred Osborn’s hand luggage contained a roll of double-sided tape. It was immediately confiscated as he was told it could be used to tie someone up and hijack the plane! Even if he could get through the plastic packaging everything seems to be wrapped so tightly in these days, can you imagine a 68 year old man overpowering a stewardess and wrapping her up with double-sided tape without someone stopping him? We’ll all be forced to travel nude soon – and that’s a sight I’m sure we can all do without!