For over a quarter of a century the Henley Festival of Music and The Arts has been a permanent fixture of the summer social calendar here in Henley. I’ve been to every single one of them, and with its unique riverside setting the five-day festival offers an incredible variety of artistic performances both visual and musical. 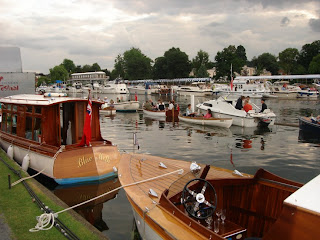 The scene on the river at Festival time

This year the organisers really surpassed themselves. I went on Wednesday evening with Felicity, Josephine and cousin Paul. The main attraction and star of the show was the fabulous young singer - Katherine Jenkins. What a n extraordinary repertoire she has!

Katherine Jenkins
She was performing on the floating stage. This enormous stage is set right on the river, facing back towards the Regatta stands. As you watch the show boats of every description silently glide past, forming a unique moving backdrop. Before the show we wandered around the many tented art galleries dotted around the grounds. Certainly the best ever art exhibits they’ve staged, in my opinion. Here are a few examples: 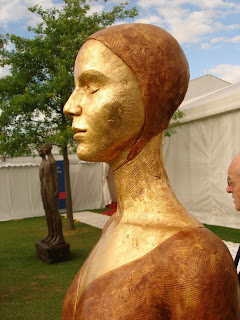 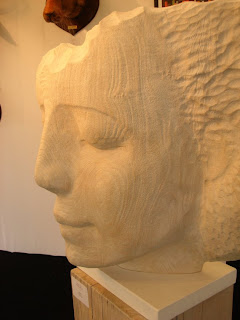 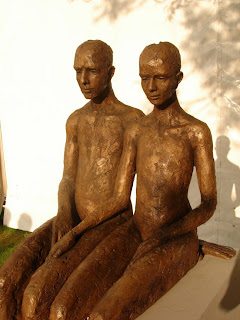 At the end of the evening we were treated to a spectacular ‘aerialist’ artistically cavorting to music high in the air encased in a semi-transparent orchid-shaped bubble called ‘The Diamond’ which slowly inflated to a height of over 30 feet. (During a phone-in last Sunday morning to BBC Radio Berkshire, in my excitement when describing the Festival, I irreverently described the Diamond as a giant sparkly transparent condom! Oh dear). 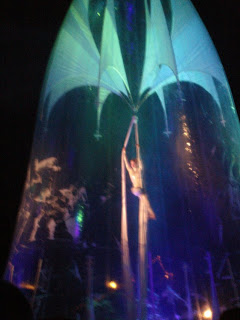 The Diamond
Adjacent to the Diamond a lone violinist played a melody as he carefully transversed a tightrope high above our heads. 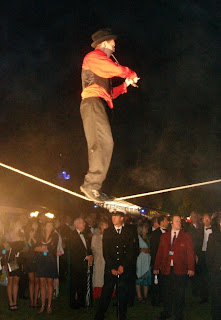 The evening ended with a firework spectacular, set to music. 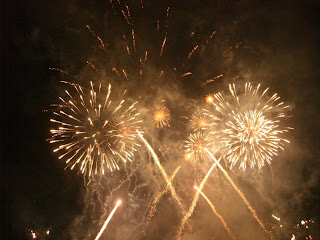 Sunday was the last day of the Festival. I‘d been invited there, with a companion (Kerry), by the Chairman. We met at Paul and Debbie’s home and were all at the Festival grounds by 6pm, which gave us time - before joining our hosts for dinner - to see more of the art exhibits. As we went in a pair of enormous ‘flies’ towered over us accompanied by an equally tall ‘Devil’. 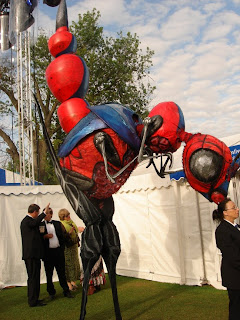 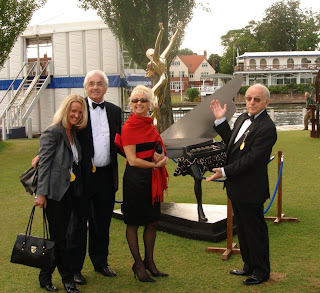 Kerry, me, Debbie and Paul

An exclusive exhibition of Salvadore Dali’s work was on display. This bronze sculpture is of a ballerina dancing on a piano. 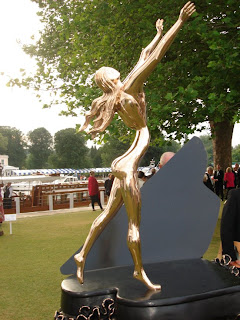 The Terrace Restaurant overlooks the river where we joined our hosts for dinner. As we ate we watched the tranquil ever-changing scene before us. It was a beautiful balmy night, which pleased the girls, even though they’d brought pashmina’s in case the wind blew in from the river. The main attraction on the floating stage was ‘The Bootleg Beatles’ - probably the best tribute Beatle band in the world. Kerry, being a dancer and singer, was thoroughly enjoying herself from our wonderful vantage point in the stand as she clapped away in time to the music. Me, I’m more of an Elvis Presley fan. 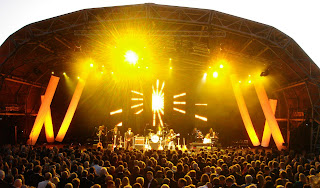 The 'Bootleg Beatles' on the floating stage
The evening – and the Festival – ended with Jo Brand performing at the Riverside Cabaret tent. She’s one of Britain’s best female comedians and is renowned for being a bit scatological. I find her extremely funny. Pity we had to stand – she’s very popular. Her show lasted nearly an hour, after which we wended our way home around midnight.
I haven’t done much painting this week. Been a bit under the weather, I’m afraid.
You know, I really value my friends. Very caring. On Saturday morning, for example, Felicity drove me to The Royal Berkshire Hospital for a pelvic scan. And waited the couple of hours till it was over to bring me back home. And another good friend will take me to another hospital on Thursday morning for my scheduled colonoscopy- which I’m not looking forward to.