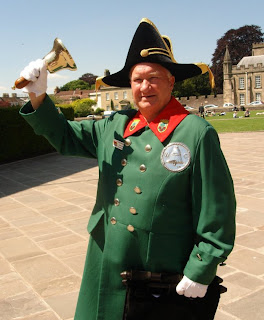 I drove down to Somerset on Friday morning where I’d been invited to stay overnight with Sharran and Mike North (he of ‘Dragons Den’ fame). In the afternoon while Sharran was out getting her nails done( I think) Mike and I did a jigsaw puzzle on the verandah. What, you say, two grown men doing a jigsaw? In fact it was a special jigsaw. The Wentworth Wooden Jigsaw Company have just published my painting ‘SwanUppers at Marsh Lock’ as a lovely wooden jigsaw puzzle, and I’d given one to Sharran and Mike.
In the evening we joined about twenty miniaturists for a dinner at the Ancient Gate House adjacent to Wells Cathedral. What a beautiful and enormous cathedral it is. It dominates the city. Early next morning I drove back into Wells - Mike and Sharran had left some hours earlier to set up their Olive Trail stall in the Market Place there. By the way the gent in the green frockcoat is the Wells Town Crier. 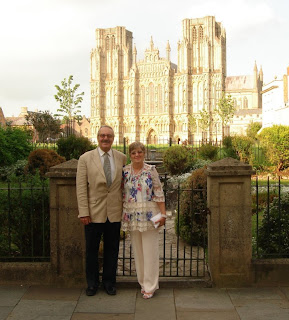 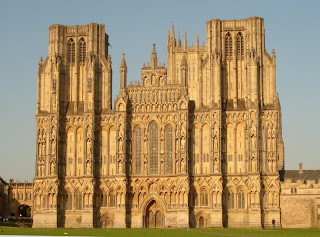 Wells Cathedral in the Sunshine

The exhibition looked really good – probably the best ever. It was enhanced by a collection of beautifully painted lacquered Russian boxes by our Russian members. After the well-attended lunch – preceded by a prayer in Latin to commemorate Nicholas Hilliard (the most famous miniaturist of the16th century) – the awards were given out. Sitting opposite to me at lunch was David Lawton – he won the award for Excellence in Acryllic or Oil for his splendid portrait entitled ‘The Egyptian Girl’ It’s always good to talk to fellow artists about techniques and methods. David hasn’t yet tried to paint on vellum, so I promised I’d send him a piece so he can try it out.
I was very pleased to win the Bell Award for the Best Portrait (it was of Leslie Thomas – the famous author). I’ll keep it for one year before returning it next year, when I’ll receive a small replica. How nice. 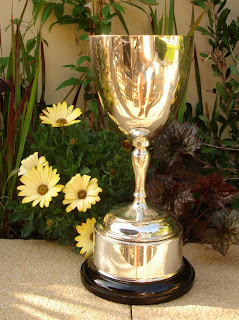 At two in the afternoon I left Wells to drive down to Devon where I’d be staying with old friends from my Singapore days – Ian and Jane Stevens. I’d planned to take the country route to Torquay, but instead foolishly relied on the pleasant sounding girl who tells me where to go on my Sat Nav. Big mistake! She obstinately directed me on to the M5 motorway. I’d only been on it for about twenty minutes when the traffic started to slow, then after another mile or two, virtually stopped altogether. Two hours later I’d travelled just over a mile! There must have been a big accident somewhere because police cars, ambulances and other assorted official vehicles raced past on the hard shoulder. Eventually the whole motorway was closed and all the cars were directed on to a slipway to I know not where. Another hour in traffic jams until I lost patience and at the first roundabout retraced my route back to the M5. There I travelled back the way I’d come for about 20 miles, looking at the poor wretches on the other carriageway fuming in the heat (and it was the hottest day of the year - nearly 80 degrees)) as they stood by their immobile vehicles.
Isn’t this a boring story? Nearly finished. I eventually went round in a great big zig-zaggedly circle to finally end up here in the village of Bishopsteignton. The journey took over five hours, and should have taken just two. You feel so helpless when there’s a hold-up and you don’t know why or when it will clear. I got hopelessly lost in the narrow lanes of Devon as I went backwards and forwards retracing my steps time and time again. Luckily there was no one in the car with me as the air turned blue with my swearing.

But today is another day. And as I said I’m enjoying the peace of Ian and Jane’s garden. It’s another gloriously sunny day. 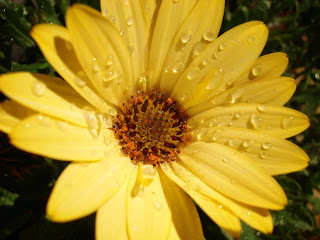 A yellow daisy in the garden 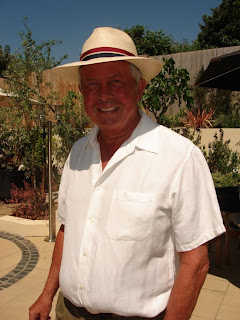 Ian with a suntan

David and Joyce joined us for champagne on the terrace prior to driving to a tiny hamlet called Marldon to have lunch in the Church House Inn. There’s nothing I like more than a Brandy Snap Basket with pineapple ice cream to finish a meal with. Which is what I did.

So what did I do earlier in the week? It was pretty boring, as I spent the first three days doing my income tax for the year. Finally the old washing machine was taken away which means I can get back into the kitchen once again.

On Monday I went for another tutorial at the Henley Bowling Club. David, the coach for the evening, put me right on my stance, which resulted in a big improvement. Now I have my own set of woods hopefully I’ll progress a bit more rapidly. I’m enjoying the game a lot – there’s a lot more to it than I thought, of course.

Felicity, Fenwick and I went to the cinema on Tuesday evening to see the film ‘Angels and Demons’ based on Dan Brown’s novel. Certainly the lavish scenes of the Vatican and the fabulous costumes were spectacular. But the story was beyond me. It reminded me more of an Indianan Jones epic. Tom Hanks in the leading role discovers the resurgence of an ancient secret brotherhood known as the Illuminati – the most powerful underground organisation in history. We were treated to a non-stop race around sealed crypts, catacombs and deserted cathedrals. It was all most frenetic and at one point the villain had removed one of the Cardinal’s eyes so he could use it to enter a secret vault, which needed eye recognition entry. Quite gruesome. I really wasn’t sure what to make of the film.

To keep you updated on the swans before they finally leave our garden, I took this little video the other day. You can see there are only five signets left. One of the original seven was taken by a crow, and the other one either fell victim to a pike or just got lost. We’ll never know.