How to Win Wars

Harpsden – a little village on the outskirts of Henley – held its annual fete last Sunday. I was amused when, at the hoopla stall, Henley’s Member of Parliament, John Howell, bought 6 hoops, he was asked whether he’d like a receipt! Surprisingly I managed to win a prize there which I gave to Charlotte – one of my great nieces. These little country fetes are always fun, This year, apart from all the sideshows, raffles, children’s races, coconut shies, dog show, snake charmer, bookstall, birds of prey demonstrations, etc. etc, they also staged a gigantic ‘tug-o-war’ with scores of children taking part. It reminded me of the answer my great nephew Max
gave to his mother when she asked what they’d been taught at school that day (it was around Remembrance time). He thought for a bit and then said “We had to keep quiet and think about all the brave soldiers who had died in the Tug of War!" Wouldn’t it be great if wars were decided in that way today?

Although I like owls I’ve always thought that the white faces of barn owls are bland and somewhat disdainful, but it was only when I saw one close up at the fete that I realised how beautiful their feathers are. 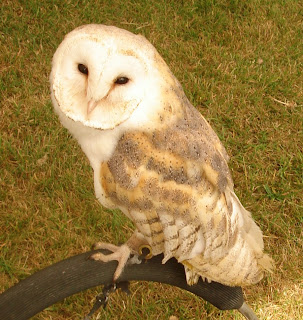 On Wednesday I had an appointment with the surgeon Mr Farouk. As I’ve had fairly severe stomach pains which have lingered for a couple of months now he’s scheduled me for a colonoscopy and a CT scan within the next few weeks. I really don’t like the idea of a camera meandering its way though my body, but so be it!

Since last week I’ve been bowling twice and am thoroughly enjoying it. I had no idea there were so many rules, particularly about measuring distances. On Friday we played a team called ‘Portrait Software’. It was a beautiful balmy evening and as Henley Bowling Club is adjacent to the river we could appreciate all the many activities going on just over the hedge, which surrounds the green.

I haven’t been idle this week – in case you think my life is one long round of social activities. Here’s a miniature portrait I finished yesterday morning. 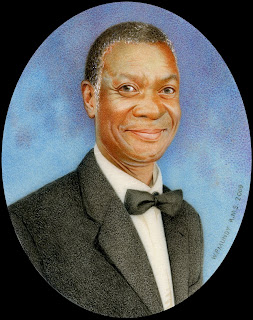 In 1784 The Houses of Parliament burned down. All the people watching the inferno from across the river cheered loudly. As the revelations about the greed, dishonesty and downright thieving by many of our ‘honourable’ members are revealed it wouldn’t surprise me if a similar protest took place today. With an overwhelming amount of our laws coming directly from Europe these days I suppose it’s inevitable that so many of our MP’s have time on their hands. Which would explain why they can unbelievably claim reimbursement from the public purse for such things as - one paper clip (39p), rubber bands (£1.44), a single carrier bag (25p), and a 68p subscription to ‘Practical Poultry’. These items are, of course, the tip of the iceberg as the MP’s are claiming many thousands of pounds in inflated council tax payments, mortgage interest, and all sorts of wierd and wonderful things.
The criteria for claiming expenses clearly states that they are to be “wholly, exclusively and necessarily incurred when staying overnight away from their main UK residence for the purpose of performing Parliamentary duties”. So how on earth can they justify claiming for dog food, toilet brushes, gay magazines, slug pellets, super glue, latex gloves - ad infinitum. I wonder if, or when, the 2006 Fraud Act and the 1968 Theft Act will be activated. Of course Tony Blair’s expenses claims have been very conveniently shredded!

The phrase “political correctness gone mad” has been done to death but how else do you describe just a few of the examples I read about lately? - British troops returning from Iraq and Afghanistan have been banned from putting up regimental pictures in their barracks ‘in case they hurt themselves knocking a nail into the wall.’ One Regiment was charged £500 to install an electric socket. £500!!! A policeman was asked to pose on a stationary bicycle for a publicity photograph, but refused for ‘Health and Safety’ reasons as he hadn’t passed the cycling proficiency test! ASDA demanded proof of identity the other day for a customer who wanted to buy a spoon! (In case she decided to murder someone with it!) Hard to believe isn’t it? 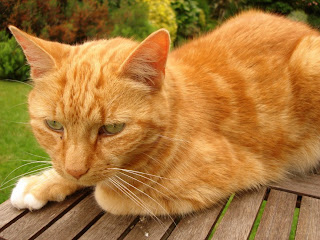 This is Sue’s cat. I photographed her after the fete on Sunday when Val and I spent a pleasant hour or so sipping brandy and champagne in Sue and Tom’s magnificent garden. I’ll end this blog in a tranquil way by posting a little video I took of the pond in a corner of the garden.