In the springtime I spend a weekend in Norfolk with my friends Vic and Christine Granger. Vic and I worked together back in the 60’s as artists designing biscuit tins for Huntley and Palmers. On Friday afternoon I drove the 150 miles to Stanfield where they live. A glorious day – the blue of the bluebells in Berkshire metamorphosed into bright yellow fields of rape as I neared my destination. By the way you can always click on the pictures to make them bigger. 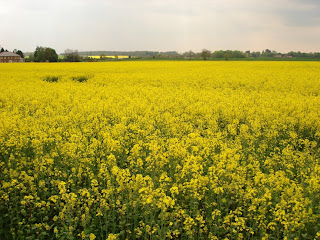 A rape field in Norfolk

Vic is now a well-respected painter of wildlife, specialising in greyhounds and whippets. 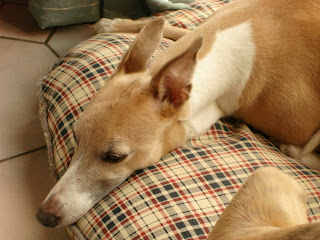 'Cleo' - one of Vic and Christine's whippets

When I was a small boy I always wanted a train set, but my mother never could afford to buy me one – so all these years later imagine my joy when Vic and Christine suggested we take a trip on the Bura Valley Steam Railway. So on Saturday morning we drove to Aylsham to board a lovely little steam train called ‘Wroxham Broad’. These little trains run on tracks just 15 inches wide with comfortably cushioned cabins seating four people at a pinch. The clickety-clack as we travelled the nine miles to the coastal town of Wroxham was made doubly enchanting by the toot-toot of the hooter (I’m sure it has a special name) and, best of all, the heavenly nostalgic smell of the steam as it passed by overhead - I wish I could transmit it via this blog. Talking to the engine driver before we set off I heard him shout out something like “The stick just fell off the top” to another driver (they have 5 little locomotives on this line) and asked him if they were special technical terms. “They are round here!” he replied. Here are three of the steam engines: 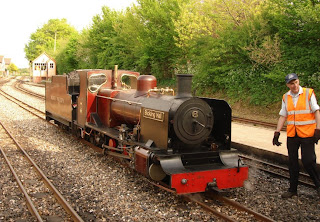 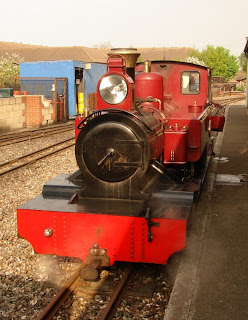 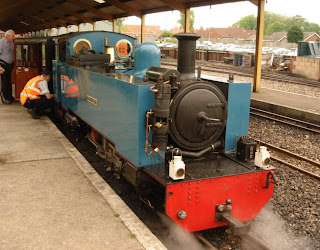 At Wroxham it was just a short 20-minute walk to ‘The Queen of the Broads’ for a 2-hour river trip (To any American friends amongst my readers The Queen of the Broads is not who you think it is, but an elegant 150 seat passenger boat which navigates sedately around the waterways of northeast Norfolk.) The captain was very knowledgeable about river life and although living on the river myself, and being fairly conversant with most of the antics we saw, I didn’t realise that coots transfer some of their own breast feathers to their young after softening them, which apparently gives a lining in their stomachs thus protecting them from sharp fish bones. 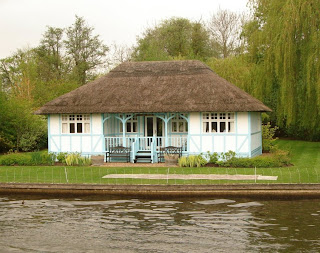 An original thatched cottage on the Broads

The return train journey was uneventful and we had a chance to look at some of the other steam engines in the station. I’ll add a little video of ‘Wroxham Broad’ passing us by on the return journey.