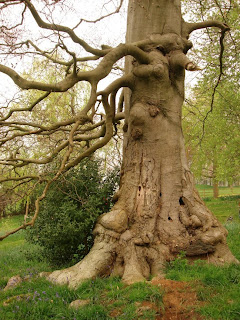 Could I have become a secret agent?
I mentioned to one of my most faithful blog followers recently that I had written a few books on miniature painting and would like to give her a couple of copies. But as I’ve never met her, or heard her voice – we communicate by Skype chat or email – we keep our relationship enigmatic. Getting back to secret agents. I needed a place to ‘drop’ the books and suggested a hollow tree somewhere. As luck would have it I found one last week in the grounds of Greys Court in Henley. (And as it comprises over 200 acres don’t attempt to look). Having located a really magnificent hollow tree, I took my little parcel there on Wednesday carefully wrapped in camouflage plastic. But I had chosen the very day when scores of children were having an Easter Egg hunt! Not only that, the hollow I’d carefully located had been enlarged and would have revealed the parcel. So plan B came into action and luckily a few hundred yards further on I found a fallen tree trunk with just enough room in it to hide the parcel. It needed a few daffodils and other bits of greenery to cover the hollow. Anyway all was well and a few hours later my enigmatic friend retrieved it safely. The picture above was to have been the hiding place.

On the subject of intrigue, my very old friend Sandy who lives in Texas found me on Facebook the other day and asked why she hadn’t received a copy of my autobiography - especially as we were engaged at one time and she knows she features quite heavily in the book. So I sent her a copy yesterday, but as I imagine she has a jealous boyfriend I was asked to send it to one of her friend’s address with a fictitious name. My choice. So I addressed the parcel to Cecila McPhirtlesquirt. That should keep the postman guessing!
Vince Hill was 75 on Thursday. Hard to believe – time just races along too quickly. Ten of us were invited to celebrate the occasion at the Baskerville Arms in Shiplake. A great evening, good food and great wine, and happy and stimulating company. 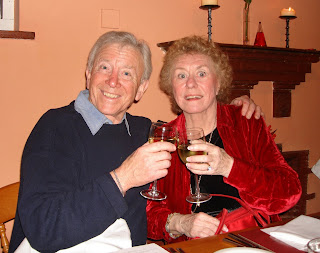 Vince and Annie at the Birthday Party

When I was a baby, while my mother was working as a pastry cook at the Galleon Tea Rooms in Wokingham, I was pushed around in my pram by a young friend of hers called Olive Berry. I remember her well. As I hadn’t seen her for about 60 years I enlisted the help of my friend Averil to see if she was still alive, and if she was, where was she now? Averil came up trumps with the happy result that on Thursday afternoon we, together with Pat, visited Olive in her care home in the little village of Finchampstead. At the age of 87 Olive has a razor sharp mind and a prodigious memory. She told me she had even seen me on a couple of TV Art shows I’d appeared in with Rolf Harris. We spent a very nostalgic hour with her, and then looked around the Norman church and churchyard in Finchampstead. (It’s where the Salvation Army Bramwell Booth sisters are buried). 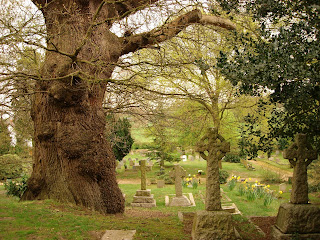 The Churchyard at Finchampstead

For the past two weeks I’ve not been idle, as I’ve painted two miniatures. One is of Anthony Green – the Royal Academician. Here he is holding his palette. Anthony paints very large pictures – quite the opposite of mine. I did, however, paint a large one of him a number of years ago. He was wearing a watch on his wrist and it kept the correct time because I’d painted everything except the hands which were part of a real movement attached to the back of the painting thus allowing the watch hands to show through at the front. 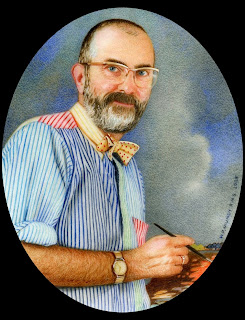 Today is the anniversary of Susie’s death. She died on Easter Sunday 17 years ago (Can that be possible?). To commemorate her life I planted a Magnolia Stellata in our garden so it comes up each year around the anniversary. Today I put flowers on her grave in Hurst – African Violets. They aren’t frost hardy but the weather is so warm I thought I’d risk it as they looked so lovely. Later this evening I put flowers on brother Bob’s grave in Harpsden as the 20th of April is the date of his birthday. 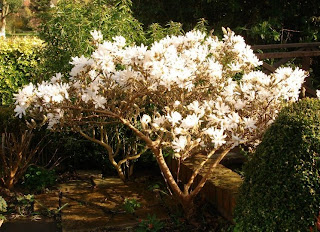 Sir Clement Freud died on Friday. Grandson of Sigmund Freud, his dry wit demonstrated for many years on the BBC radio programme ‘Just a Minute’, always a amused me. Apparently he wanted to have the words “I told you I was ill” inscribed on his tombstone, but Spike Milligan beat him to it. So instead, as formerly he was very much involved with food, he came up with the words “Best before….” to be followed by the date of his death. Very droll!