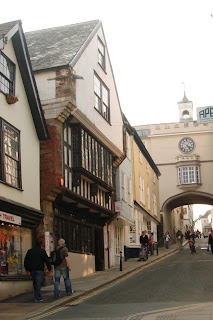 Old Totnes
Joanna, my old friend who lives in Vienna, decided to celebrate her birthday this year at Totnes in Devon. I was invited to her party, so booked a comfortable seat on First Great Western last Thursday. What a beautiful day that was. Half an hour out of Reading a tiny little canal meandered along next to the railway line. Barely 10 feet wide and dotted with miniscule hand-operated locks, the occasional canal boat moored along its banks it was a picture of perfect peace and tranquillity. Joanna had booked us into The Royal Seven Stars Hotel – a delightful 17th Century Coaching Inn which retains much of its original ambiance I imagine. 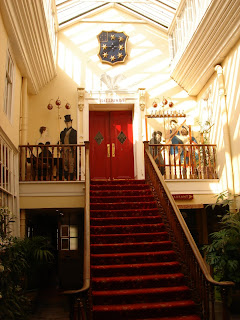 The Entrance to the Royal Seven Stars Hotel

Totnes lies above the river Dart and is one of Devon’s true gems. Full of colour and character, it’s the second oldest borough in England and boasts a Norman castle and an ancient church. Climbing up the picturesque hill we had a look around St. Mary’s Church. Fragments of the Norman period remain and the present church was rebuilt in the 15th century. It contains an elaborate massive carved stone screen, made in 1459. 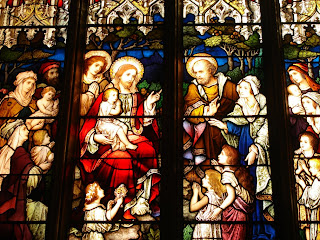 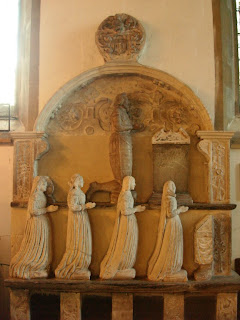 Monument to Christopher Blackhall and his four wives

In the evening we joined a few of Joanna’s friends at an old inn reached by negotiating miles and miles of twisting and turning narrow county roads. Luckily we were driven there by natives of Devon. My steak was truly succulent. I’d asked for a really juicy and well-done fillet steak (normally chefs seem to sneer at requests for well-done meat), but this was one of the best steaks I’ve ever had. The pub stayed open well past closing time while we celebrated as everyone seemed to know everyone, and we had a great time. (But I wouldn’t recommend the ancient mediaeval outside gents loos.)

The following morning Joanna and I spent a few magical hours wandering around the magnificent gardens of Dartington Hall. Not a cloud in the sky, no breeze, just a perfect spring day. Built in 1368 this Baronial Hall was built for the Earl of Huntingdon – half brother to Richard II. In 1925 it was bought by Leonard and Dorothy Elmhirst who spent a decade of reconstruction in making it the glorious place it is today. The blossoms on the magnolia trees were at their very best, and the enormous grassy steps some twenty feet wide and kept in perfect condition, surrounds the arena that would once have been the site of jousting. 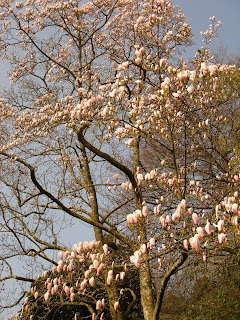 Magnolias in the Sunshine 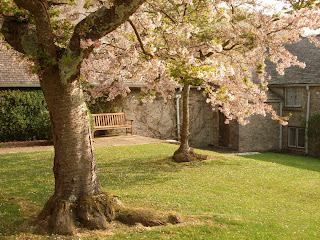 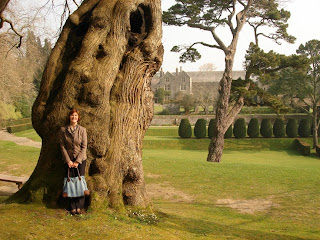 Joanna in Dartington Hall Gardens
Tracey’s young son, Jamie, picked me up at Reading station later in the afternoon and after sorting out my mail and making all the bookings for Henley Regatta at Phyllis Court in the summer ( they have to be done way in advance if you want to get the best seats in the restaurant and on the deckchairs) I handed them in and met Jilly for a game of snooker there. Two hours later we tootled up to Wargrave where Paul and Debbie had invited us to supper. Delicious meal and cosy atmosphere – a lovely evening. (I spent part of the evening with my hands over my ears as, having missed the much heralded explosive episode of ‘Eastenders’, I didn’t want to know what had happened before I caught up with my recording of it.)

Yesterday morning Gill Dodds, the Mayor of Henley, was in the main square of Henley where she’d inaugurated a fund raising event in the shape of ‘A Mile of Pennies’. People came from all over and soon Falaise Square was a hive of activity. I took a bag full and saw Paul and Debbie there. Paul was doing his usual great job of enticing the crowd. We trotted along to the Cafe Rouge and had a late breakfast then headed back to the money mountain. Vince and Annie Hill were there by then. 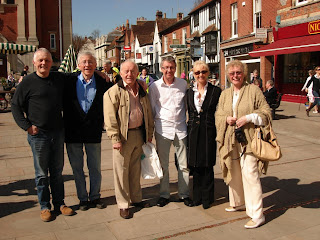 On Wednesday I was part of a team at the annual Phyllis Court Quiz Night. Held in the ballroom there were 12 tables of 10 people each. After a nice supper, the very talented chairman for the evening, together with his half dozen acolytes, started the proceedings. He’s an ace with the computer and had spent months preparing the 100 or so questions that were projected onto two large screens. The last time I went to the quiz evening out table managed to come last and were awarded wooden spoons. (I still have mine and use it for whisking up scrambled eggs). But this year, lo and behold, we won! As we were competing with Probus members and the Tennis Section, plus other intellectuals, we gave ourselves a little pat on the back and walked away with our prizes – a free dinner at the Club.

I’ve just planted about thirty double begonias on my back balcony, and as the day is still glorious I think I’ll spend the next few hours cleaning my big boat.