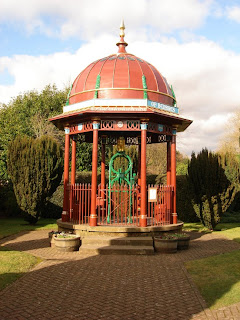 Last Sunday Debbie McGee and I visited a riding School at Checkendon, and on the way back home stopped at a little village called Stoke Row, where a most impressive 386 feet deep well is located. It was given to the village in 1863 by the Maharajah of Benares. The Maharajah had become very friendly with Mr Edward Anderdon Reade who had lived and worked in India for 34 years. He was the Governor of North West Province for a period, including the mutiny in 1857, when he and the Maharajah worked closely together. One of his many deeds there was to sink a well in 1831 to aid a local community in Azimurgh.
Some years later the Maharajah decided on an endowment in England, having recalled Mr Reade’s generosity and childhood tale of a Stoke Row boy being beaten by his mother for stealing a furtive drink of water (the ponds and clay pits - the main water sources - dried up in times of drought).
The Maharajah suggested that he provide Stoke Row with a free and public well. This beautifully ornate structure was opened on the 24th May 1864 – Queen Victoria’s birthday – and served the local community until 1939, yielding 600-700 gallons each day. The well’s pristine condition today is a result of a complete restoration between 1979 and 1983.
Debbie had mentioned on her BBC Radio show the previous Sunday that she wanted to grow sweet peas. This was picked up by Trevor Beales, a keen gardener, who gave me a quantity of really good seeds for Debbie. And as they need a fair amount of horse manure to prosper, he suggested we pick some up at the Checkendon Equestrian Centre. Which we did, on that bright and sunny Sunday afternoon. It did pong a bit! (When I take a girl out for a treat she doesn’t exactly expect to be shovelling s***!) 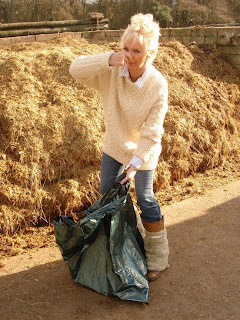 On Thursday evening Felicity, Fenwick and I called in to my favourite Chinese restaurant – the Chef Peking in Henley – before seeing the award winning film ‘Slumdog Millionaire’. It certainly deserved all the Oscars it won, in my opinion. Having been to Bombay on numerous occasions I could really appreciate the colour, pace, poverty and especially the great music in the film. I’ll definitely buy the Blu-Ray version when it’s released, and enjoy it all over again at home in full surround sound glory.

I like travelling by train, and as I’d been invited to my old friend Connie Briscoe’s 80th birthday party on Friday evening in Padstow, decided to book a first class seat to Cornwall on Friday afternoon. Spot on time – to the minute - I was extremely impressed with the service and comfort on the train. Free drinks and biscuits, it purred along for 3 hours or so in complete silence.
Connie’s son-in law, Jeremy, met me at Bodmin Parkway – the nearest station to Padstow - and I spent a very nice couple of hours with them before checking in to a comfortable bed and breakfast farmhouse near Padstow. About 50 people were at the party – held in the very smart and brand new Royal Cornwall Pavilion Centre. I only knew three other people there, but was so pleased to find Arthur and Valerie at my table. We, together with Connie, had first met in Singapore in 1960 when Connie’s husband was in the Royal Air Force and Arthur was a Royal Marine Officer.
Yesterday, Fiona took me for a little walk around Padstow. What a pretty little town it is with its enclosed harbour, fishing boats and scores of delightfully named shops and boutiques. 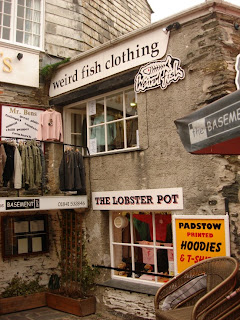 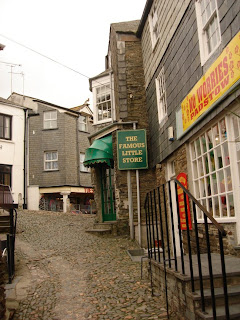 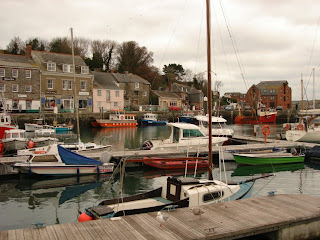 Just before meeting Connie and her friend Arlene for lunch, we visited the National Lobster Hatchery in Padstow. Their main purpose is to stabilise the lobster population and preserve the marine biodiversity of Cornwall and the Isles of Scilly. Since they opened in 2000 they have released over 50,000 juvenile lobsters into the sea around Cornwall. Fishermen bring ‘pregnant’ female lobsters into the Hatchery to give them a chance to release their delicate offspring in captivity where there are no predators. The young lobsters are then raised to a size where they can be released back into the sea and look after themselves. Here’s a couple of things you may not know about lobsters – they can taste with their feet, and, amazingly, they can live to be a hundred years old. We saw a few old fellas (and old dears) there. This one is fifty years old! 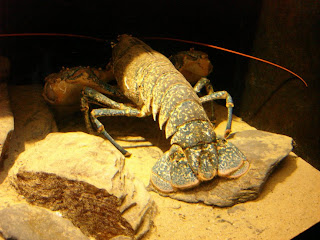 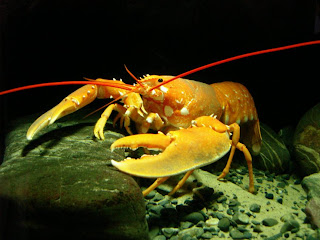 The other picture is a lady lobster (with the name of Thermidor) and is known as a colour morph lobster. Being bright orange, she’s one in only ten million. I made a little video of her. Don’t you think she’s beautiful?