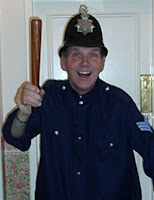 It’s hard to believe, but Company Director Gary Sanders was stopped by a policeman in Merseyside for ‘laughing while driving’. The reason given by the policeman was that he was ‘laughing excessively’. He was questioned for over 30 minutes – one of the questions being about his hair colour! (It reminded me of a Smith and Jones TV sketch when Griff Rhys Jones, acting as a young thrusting police officer, arrested a youth for ‘having frizzy hair’) But this was no joke, and the policeman insisted that Gary Sanders produce his documents at a police station, despite admitting – eventually – that no offence had been committed. I think he deserves a grovelling apology, don’t you?

Spring has nearly sprung and the daffodils are beginning to adorn the verges and roundabouts. We even have a tulip in our garden. 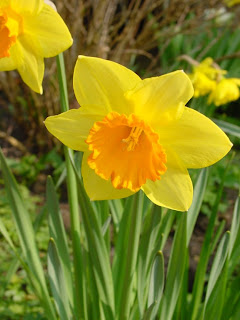 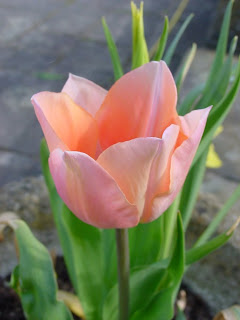 My week has been one of 9-hour days of painting, relieved by a game of snooker with Jilly at Phyllis Court on Monday evening and a visit from old primary school friends on Thursday. You’d have laughed if you’d seen us playing snooker. Both of us are amateurs, and the rules posted on the wall were printed in a typeface too small for either of us to read. We didn’t know how many points each ball carried, and at one stage I forgot to put a couple of the coloured balls I’d potted back on the table. Nevertheless we had a good time and a good laugh - no policemen around, so we weren't arrested! We'll be better informed next time we play. Afterwards we went to the new Italian restaurant in Henley but I couldn’t find anything on the menu that didn’t contain cheese, tomato or garlic, (my pet hates) so we ended up the road in a late night café. My other highlight was to see Pat and Averil again. They came laden with home made cake, prawns, crusty bread and chilli sauce. So not only did we have a nice lunch, but Pat, bless her, ironed nearly twenty of my shirts while watching ‘De-Lovely' (the Cole Porter story) on my big screen.
Two of my most prolific blogging friends – Pootle and Bluebells - are ganging up on me! Because I said I don’t like people sitting next to me in the cinema eating popcorn, and that if I owned a cinema I’d ban it, I’ve incurred, if not their wrath, the vow that neither of them will ever go to the cinema with me. 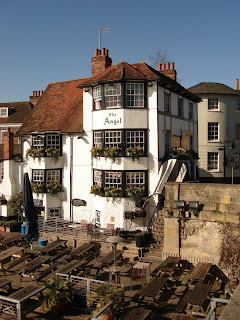 The Angel on the Bridge 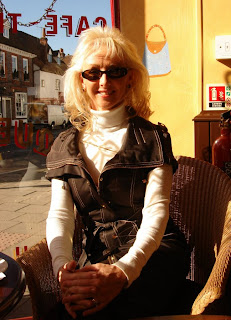 Debbie in the Sunshine

Yesterday was gloriously sunny. Paul and Debbie invited me to join them for coffee at the Café Rouge in Henley. The whole town was glittering in the sunshine. One of the things I like about living in a small town like Henley is that you constantly meet people you know. Mike Sweeney, the Chairman of the Regatta, stepped out of a taxi on his way back from a skiing holiday as I walked over the bridge, and Martin - the Henley Standard cartoonist - showed me round his new art gallery in Hart Street. Paul told me he’s joined ‘twitters’. It sounds like fun, but as my phone doesn’t have email access there’s no point in me being a twitterer. It doesn’t even have a camera. Paul’s inventive mind never stops. I’d mentioned that I'd like to have an exhibition in Martin’s Gallery but I felt it was too small. Quick as a flash he suggested that as I paint miniatures I could stage an exhibition in a phone box.