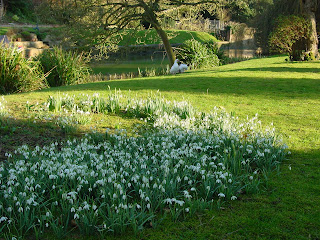 The sun is shining brightly, the snowdrops are nestling in the grass, and a bevy of Canada Geese are making a real old rumpus as they chase each other around the millstream. I hope they don’t decide to make the bathing platform of my boat their home, as they are very messy creatures. From my vantage point on my front balcony I watched five small children have great fun as they manoeuvred their grandmother’s dinghy around and around. After a while they got the idea and managed to put the oars in the water simultaneously and steer a course under the bridge where the millstream joins the main river. The three boys in the group showed great enterprise by attaching a piece of rope to a big fifteen foot tree branch which my neighbour had spent many hours over the past three weeks coaxing out from under the sluices in the garden. Once back to shore with the heavy branch trailing behind them, with a great effort the boys hoisted it on to one of the landing stages while the two little girls looked on admiringly. It was lust like watching a scene from ‘Swallows and Amazons’. What a perfect weekend they chose to come over here for a short holiday - this time last week the river had risen to about two feet over the moorings. I wish my dinghy was in the water, but being a wooden clinker-built boat it is still in winter storage and won’t be back in the river till early April.


Even the cows are enjoying the warm weather – I picked this card up from the Farm Shop this morning while buying a few plants. 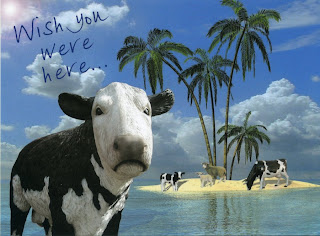 I’ve never been a fan of the Turner Prize selection – especially the so-called ‘Installation’ entrants and can’t believe that the majority will pass the test of time as pieces of art. I’m sure most of them are slowly rotting away in the bowels of Tate Britain. However, Mark Wallinger, the artist who produced one of the more artistic pieces for the fourth plinth in Trafalgar Square – Ecce Homo, a figure of Christ crowned with barbed wire – has won the competition to create a landmark monument for the South of England. His giant white horse will dominate the landscape in Kent, and I for one will look forward very much to seeing it in a couple of years time when it's completed. I remember being impressed with Anthony Gormley’s ‘Angel of the North’ a couple of years ago when my train passed close by it as I returned from the Edinburgh Festival. We have horses carved out of the chalk landscape, which are part of our heritage – The White Horse of Uffingham and Cerne Abbas being impressive examples – but just imagine the size of Mark Wallinger’s horse. One hundred and sixty feet high (I still think in yards, feet and inches) the horse will be 33 times life- size - about as high as the Statue of Liberty in New York – you and I will become Lilliputians with our heads no higher than the horse’s hooves. What a sight it will be! 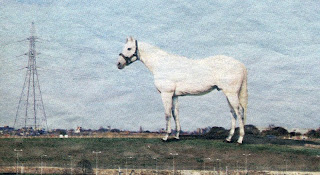 My week has been one long session of work. Nine hours a day, every day. I’m working on a large painting of our Olympic Oarsmen setting out on a misty day last summer on the river at Henley. About 26 inches wide it’ll probably take me about 300 hours to complete. This is my progress so far – and that’s nearly 60 hours work. There are 42 people in the painting. 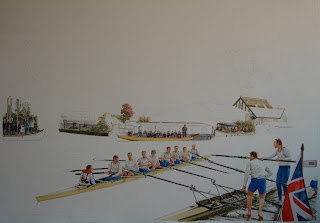 My favourite story of the week concerns the Irish Police. Apparently in a six-month period, a Polish driver had clocked up over fifty traffic offences on Ireland’s roads. In vain the police tried to catch up with Prawo Jazdy, but never succeeded. Each time the driver gave a different home address. It wasn’t until an internal Police memo revealed that Prawo Jazdy - the name printed in the top right hand corner of the Polish driving license – was the Polish for ‘Driving License’!