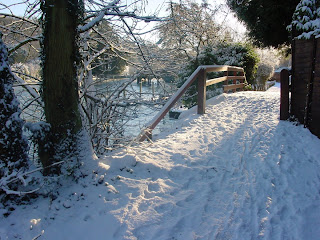 The Little bridge in the snow

Today it’s gloriously sunny, and I’ve just walked across the bridge spanning the river at Marsh Lock. Still lots of snow and ice around, but I’ve really been testing how slippery my route to Brian and Jane’s house is, because this evening their ballroom will become the venue for their very good friend Jack Babbington’s 80th birthday party. As I’ve been invited too and will be venturing back late at night in the dark with a forecast temperature of minus ten degrees, I need to know where the particularly icy stretches are. The river is running very fast now. I took a little video of the weir a few minutes ago so will see if I can successfully add it to this blog.

For several days this week I’ve been totally redesigning my web site. It’s about time for a complete revamp. Now it’s done and hopefully it’ll be up and running in a couple of weeks as soon as John Brooks does all the technical bits.

Timmy Mallett came over at the weekend to pose for me. He’s such a colourful character that I thought I’d like to make a miniature of him. He brought a whole range of bright clothes and half a dozen pairs of coloured spectacles. We decided however that the gear he wore when he was in the Australian jungle recently, performing in ‘I’m a Celebrity – Get me out of here!’ was the best for the painting. It’s already started.
My New York client emailed yesterday to say she’s delighted with the miniature I finished last week of her 3-year-old daughter. I hate sending a scan of my miniatures to the client before they have seen the painting itself because it’s so easy to blow the miniature up to ten times the actual size and see all the little imperfections. This was quite a difficult miniature to do, as I have not seen the child and worked from 3 separate photographs – one for the face, another for the hair, and the third for the dress. So I'll courier the miniature off to the USA on Monday.

On Saturday Val and I drove to Bampton in the Cotswolds to have lunch with Joanne Dalston and her daughter, Nicola, who is visiting from Seattle for a few weeks. We went to the Clanfield Tavern – a charming little old pub just up the road. 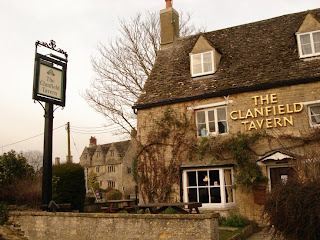 The Clanfield Tavern in the Cotswolds 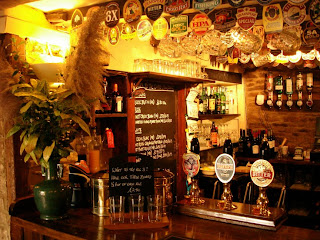 A Plethora of Beer Mats by the Bar

In the afternoon they read my blog entry, ‘Misery in Miami’ and were convulsed in laughter at my experiences there, comparing me to Mr Bean! I must admit it did seem very amusing in retrospect.

Joanna Morgan, one of my oldest friends, who lives in Vienna, came to stay on Monday night on her way back from a funeral near Windsor. We joined Brian and Jane at my favourite Italian restaurant in the evening, and because of the bad weather I checked later on the Internet that her BA flight home the following day had not been cancelled. Next morning just before I put her into a taxi I checked again. Delayed slightly, but not cancelled. But of course by the time she reached Heathrow, it was, and she had to join a 3-hour queue for rebooking the next day. Maybe my luck with airports had rubbed off on to Joanna because, after a night at the Castle Hotel in Windsor, while on her return to the airport the next morning, the phone rang in the taxi informing her that she’d left all her travel documents at the hotel! However she made the flight OK and rang from Vienna later to tell me what superb service she’d had at Terminal Five.

I’m a real BBC Radio Four fan, and a bit of a TV addict, but over the past few years have noticed a gathering left wing bias on many of their programmes. Which brings me to the latest row over Carol Thatcher. Quite understandably I can see how people find the word ‘golliwog’ unacceptable – and even racist, these days. However the BBC liberal elitists seem to be falling over themselves to be regarded by the so-called oppressed ethnic minorities as their champions. The BBC 1 Controller stated that Carol Thatcher “had caused real offence”. She probably had, but we still don’t know the context of the conversation or what she actually said. She was sacked from future programmes because of her remark. But wasn’t Jonathan Ross even more offensive over his sexual goading of both David Cameron and Gwyneth Paltrow? (He even used the f- word in his, on air, proposition to her). And just yesterday Jeremy Clarkson publicly called the Prime Minister “ A one-eyed Scottish Idiot.” Were either of them sacked? No of course not. Methinks the BBC took the opportunity to punish Carol Thatcher as a way to get back at h her mother.

This morning I was supposed to photograph a little 5-year old girl for a commissioned miniature. But there was no way she was prepared to pose. No Sir! She squirmed and screamed and there was nothing her little sister or her parents could do. So the session had to be abandoned. You’d think I was a dentist!

The raging river by the weir