As they say, some days are crap! Today is one of those. My computer caught a virus on Thursday, but it seems Spyware Doctor has cured it. But maybe not, as now my PC won’t let me type anything! A real Doctor is coming over on Monday, so maybe he can bring it back to life.

Yesterday Felicity and I saw the film ‘The Peculiar Case of Benjamin Button’. We weren’t quite sure what to expect, but it turned out to be really good. How they aged Brad Pitt was superb. As you probably know the story is about a baby being born as a very old man who gets younger throughout his life till he ends up as a baby. The special effects were wonderful and although it was 3 hours long the time passed quickly. Well worth seeing.
On Thursday I joined a group of friends on a coach trip to Windsor. We were to see ‘A Pack of Lies’ at the Theatre Royal. As it was a matinee there was plenty of time for Sue, Tom and I to have lunch in a nice restaurant by the river. The river was flowing really fast and none of the river birds could swim against it. Sad to see the little coots being swept down stream and then having to fly just to get back where they started. We watched the changing of the guards as they marched out of the castle. It was a very cold day so they were wearing thick greatcoats, but still a stirring sound as the band marched past. Before the play started we had time to browse around the shops where we all bought cashmere sweaters as they were less than half price. The Theatre Royal in Windsor is one of my favourite theatres, but I found the play a bit slow. Jenny Seagrove headed the cast. 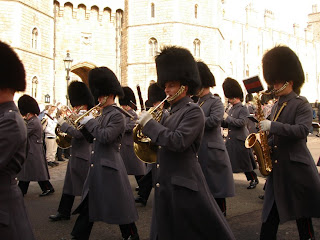 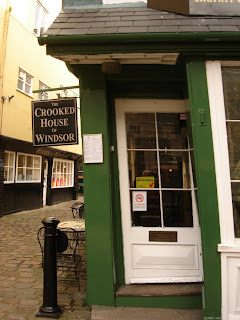 The crooked house in Windsor

At last the river is going down a bit. It’s been quite high lately – we were just one brick away from our garden being flooded. I saw on the TV News the other night friends Robert and Shirley Cranmer- Brown being interviewed. They live near the river at Shiplake and said they’d never known the river so high. I was at their house just the evening before, having a game (and a lesson) of snooker with Robert in his new snooker room, and thought then that the water was lapping around a bit. The Environment Agency is supposed to alert us riparian dwellers about flooding, but certainly are not a patch on the old Thames Conservancy men. For example, Felicity had about 4 inches of water in her house at Shiplake yesterday and when she rang the EA the young man there assured her that she was wrong! “I’m looking at the water in my house right now!” said Felicity. “Oh no.” said the young man, “I’m looking at my computer and there’s no flooding where you are!” Can you believe it? I don’t think these people ever venture away from their computers into the real world at all. 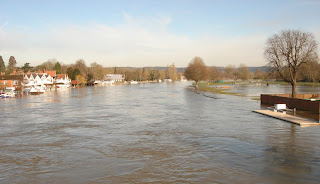 The flooded Thames from Henley Bridge

Wednesday was the day of my neighbour Bunny’s funeral. Held at the Reading Crematorium it was over half-an-hour late starting – as the vicar had forgotten he was conducting services that day. Bunny was a lovely lady, had lived in Africa at the time of ‘White Mischief’ and had many a tale to tell. Afterwards we all went to the Grandstand at Phyllis Court for tea. It was about 5pm when we walked across the lawn, and there, completely framing the bare trees of winter, was a perfect and complete 180-degree rainbow. Wish I’d had my camera with me.

Jack Babbington’s 80th Birthday party last Saturday evening was lovely. All the men were dressed in dinner jackets. I was seated next to a very glamorous lady called Tiffany. She’s a model, and in fact two of the ads she was in were featured in that morning’s newspaper. Both she and her husband liked the large sepia painting of Jane which was hanging in the lounge, and talked about commissioning me to do one of Tiffany sometime soon. I managed to negotiate the slippery bridge over the river on the way back home. Luckily it was a moonlight night and I stayed upright.

Timmy Mallett’s miniature is finished, but I’m not sure whether to leave the ‘jungly’ background in or to wash it out and paint a more nondescript background.
I’ve just started a new large painting. It depicts (or it will eventually) a river scene of our Henley Olympians as they got ready for a row-past last summer. There’ll be an eight in the water and a pair about to get in. All against a very misty morning. I may paint the Henley Dragons boat somewhere in the mid ground. When I start a detailed painting like this it takes about a week (of 9 hour days) to properly get going. Then I just can’t put it down. And as I normally don’t paint on Sundays I’m really looking forward to getting up early on Monday morning to start work on the painting. It will probably take about 6 weeks to complete.