Breakfast in a Time Warp

I saw the New Year in alone this year – mainly sprawled in front of the television, and making and receiving phone calls. The fireworks from the London Eye were quite spectacular. Geen Hong rang from Australia - she said Sydney’s were better. 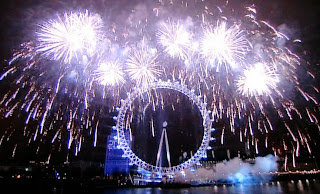 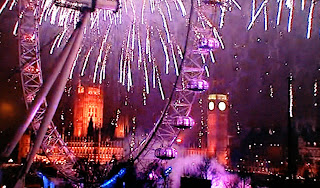 However, yesterday morning I went backwards in time, as I’d been invited for breakfast at Lord McAlpine’s estate in Fawley – a village just outside Henley. Not your ordinary New Year’s morning breakfast. This one was held in a railway carriage! 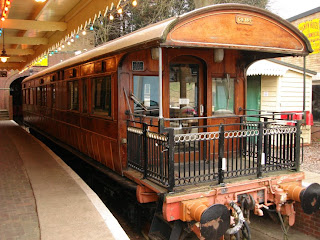 Our Breakfast venue
Lord McAlpine not only has a wonderful collection of railway paraphernalia, he has several full-size steam engines and well-appointed carriages. A large and original waiting room completes the scene. 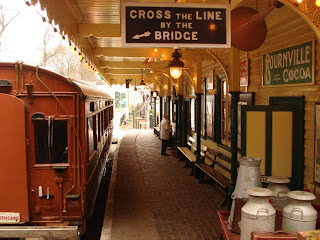 The Carriage at the station 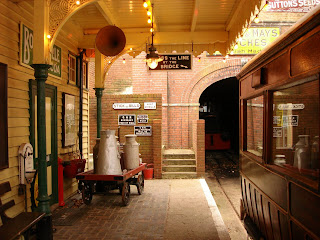 Milk churns on the platform 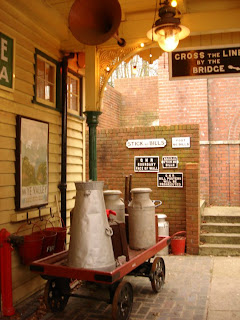 The weather yesterday was very cold and very grey. But everything else about the day was colourful. I joined Sue and Tom Yonker at about 10.30, as we were all going in the same car. What an inviting scene awaited us. A few ladies were busily cooking a lavish breakfast – eggs, sausages, kedgeree, kidneys, tomatoes, beans, bacon, toast, marmalade and coffee. All in all a splendid spread. And of course there were lashings of champagne and Bucks Fizz. We chose to eat in one of the carriages just outside the waiting room. About twenty-five guests in all were sitting at tables spread around the station. Apparently this New Year’s breakfast is a tradition Lord McAlpine started some years ago. 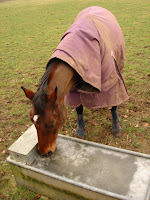 About 12,30 we all donned our walking boots and wellies for the traditional walk. As I’ve said it was bitterly cold – this horse had made a little hole in the ice covering the water trough.

As the estate covers a number of square miles, the hardiest (and fittest) chose to walk about 7 miles. We decided on a more modest distance. As well as trains, Lord McAlpine loves exotic animals, and during our little walk we came across this Tapir lolling by the side of the woodland path we’d chosen to follow. 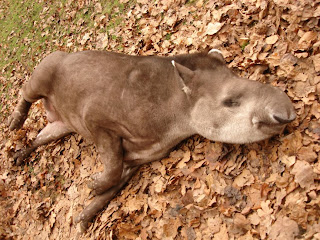 Sue soon made friends with it, and it wasn’t long before a couple of enormous ostriches came slowly padding towards us. In the distance we also saw a few deer and some other exotic animals. Earlier we’d spied a very strange animal sitting in the middle of one of the fields we were passing by. Sue walked up to it as it allowed her to get very close before it bounded off. About four times the size of an ordinary rabbit, we found out later that it was one of a number of Patagonian Hares that live on the estate. 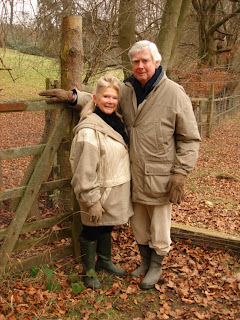 Sue and Tom on our walk 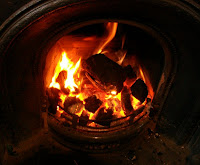 An hour or so later, back at the warm and welcoming station waiting room, we were plied with a variety of home made cakes while we sat by the fire listening to songs from the fifties (my favourite era for music). Guy Mitchell’s ‘She Wears Red Feathers and a Huli Huli Skirt’ was amongst them. The rest of the walkers arrived back in little groups in time to join us for tea and hot crumpets - and even more cake. Lord McAlpine came in with John Madejski who’d been staying at the house overnight. (I ought to say ‘Sir John’ now, as he’s just become a knight in the New Year’s Honours.) They joined us for crumpets.
After a while I ducked out to look around the nearby museum. It’s taken over forty years to amass such a comprehensive collection, and it contains every sort of memorabilia you could possibly imagine. 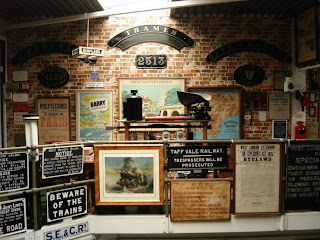 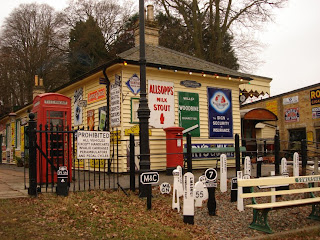 Our ‘breakfast’ finally came to an end at about 5pm. What a nice day.