If you are anything like me you can’t stand these automated telephone systems where you are kept waiting while the computer keeps giving you more and more options to click on to. Yesterday was a case in point, as two of the several presents I’d ordered exactly one month ago from ‘Presents For Her’ hadn’t arrived. After listening to about six options, I was finally told that none of the operators had the authority to answer a question about despatch dates, and I was requested to ring a different (equally expensive) number. This turned out to be the customer service number. Nearly half an hour later I was still being informed that my custom was ‘very valuable’ and ‘all our operators are busy giving everyone else a speedy service’. But not me. They delighted in telling me that ‘our phone lines are now open till 9.30 in the evening enabling us to give you an even better service, so why not ring back then.’ But I didn’t want to ring back later – I’d already been waiting for nearly half-an-hour! I eventually descended into making rude and loud comments at every new message the computer uttered. But I was completely wasting my breath by talking to a machine that wasn’t listening anyway. How sad is that! In the end I gave up, so I still don’t know when, or if, the remaining two presents will arrive before Christmas.

On Saturday it rained – and rained – and rained. I braved the horrendous spray and almost nil visibility on the M4 (why do some drivers not turn on their lights in these conditions - do they think they are saving battery life?) to drive up to see Katie Boyle in Hampstead, and to take a few Christmas presents. Margherita, her glamorous younger sister, was there so we had a nice smoked salmon and champagne lunch. I just love Margherita’s sexy French accent. Katie was well, although she still can’t walk unaided. But her two dogs, Cassie and Tottie made up for her by racing around the house at top speed. 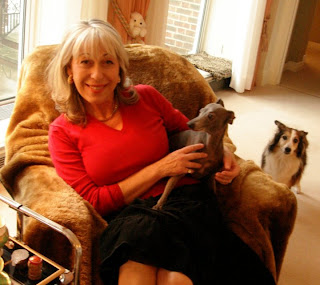 Sunday dawned – it was my great niece Becky’s 18th birthday celebration party for the family. So from all points of the compass about twenty of us descended on Waterlooville where she lives. She’ll be off to University soon and has had two offers but is hoping for one from Edinburgh. All the children had great fun watching a video showing Neil - Becky’s father - making a complete fool of himself at the Waitrose Christmas party the other day. As Neil is the general manager he’d dressed up in women’s clothing and sported an enormous blonde wig while he performed an energetic dance to the latest Mama Mia musical. About ten of the girls danced around him, he being the main star. I thought Val (his mother) was going to wet herself, she laughed so much.
Of course I took the wrong route (as usual) driving down to Waterlooville, which made us a bit late. So on the way back in the evening, Tim, one of my nephews, said I could follow them home. He said his Land Rover didn’t have good acceleration so he would be driving slowly. Fat chance! Following someone along dark country roads is difficult under normal circumstances, but when the person you are following is driving up to 80 miles an hour it’s a bit hair-raising – especially if that person is a trained Police Pursuit Driver (as Tim is). I’m sure he was testing my nerve or at worst trying to lose me! 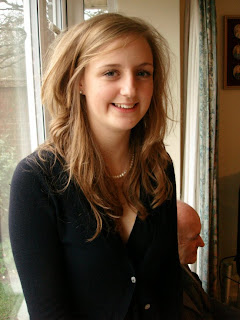 Becky at eighteen (and a little man coming out of her elbow!) 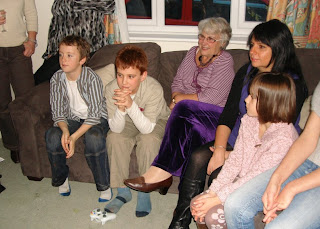 Our local newspaper – The Henley Standard – gave a party in the ‘Old Barn’ last Thursday evening for people who had contributed to the paper’s success during the year. Don’t know why I was invited, but it was a good evening. The barn is very old – even parts of the wattle and daub are exposed between some of the oak beams. Most embarrassingly my photograph was featured three times on one page in the current edition on display there. (I hate being photographed!) Later in the evening I joined Vince and Annie Hill for dinner at the Chef Peking.

Fee and Stan Stride’s annual Christmas party always heralds the start of the season’s merrymaking as far as I’m concerned. It was held on Friday at Broadplat House, where they live, just outside Henley. It’s always so nice to meet up with friends you don’t see too often.
Apart from the two presents yet to arrive, all my Christmas shopping is done – I’ve wrapped over fifty presents and sent off 300 Christmas cards. On Saturday I decorated the tree, bought a few boxes of crackers, more decorations, a poinsettia, and had my car cleaned by the very efficient Polish guys (and girl) who have a little business right next to the garden centre, and then on to the farm shop opposite to buy a couple of my favourite cherry cakes.
It’s Tuesday right now and having just photographed Diane Sutherland in her borrowed black hat (for me to see the detail in readiness for my next miniature portrait) I’m now waiting for the aerial man to come and reposition my surround-sound speakers so I can watch Blu-ray films in all their glory! 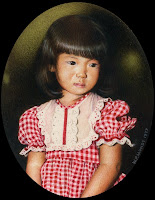 When I lived in Singapore, Teresa lived in my apartment and worked as my amah (housekeeper.) In the early seventies her daughter, Wai Heng, was born (this is a miniature I painted of her in 1977). So it was such a pleasant surprise to find a comment from Wai Heng - now a grown woman, who still endearingly calls me ‘Uncle Bill’- on my blog this morning. Apparently she’d ‘googled’ my name in an idle moment during her lunch hour and discovered the blog. How nice it was to hear from you, Wai Heng. Here’s wishing you and your family a very happy Christmas.