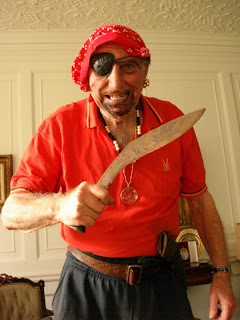 Every Christmas morning (for at least the last twenty years) my first port of call is to Bird Place, next to the bridge in Henley. This is the home of Peter and Diane Sutherland. As I approach the front door, it opens and a strange figure emerges. It’s Peter in disguise. This year he was dressed as a pirate (to reflect the current state of affairs caused, we are told, by the greed of piratical hedge fund managers). In the past I’ve been greeted by Osama Bin Laden, Lord Nelson, The Mad Hatter, A French Onion seller, W.G.Grace, The Vicar of Bray, and many, many more. When the children arrived they all looked a bit concerned about this frightening character – especially when he drew his sword and kukri.

Only last month Peter and Diane went to Windsor Castle to collect his MBE from the Queen, and I had been commissioned to paint a miniature portrait of Diane, based on one of the photographs taken at the time. It’s rare that I paint hats on my portraits, but this time it seemed entirely appropriate. I borrowed the hat itself to work from, as I needed to see more detail than was apparent in the photograph. They were both very pleased with the end result, which was delivered on Christmas morning. – being Peter’s Christmas present to Diane. 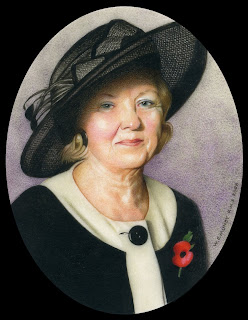 Miniature of Diane Sutherland
After an hour at Bird Place, Christmas Day was spent over in Marlow with my niece Louisa, together with Guy and their two children, Max and Katie. Val was there too and as Louisa had bought her a new television set for her Christmas present, Val can now throw away all the many remote controls that seem to have accumulated around her old set which confuse us all.
I love being with children at Christmas – especially those still young enough to believe in Santa Claus. 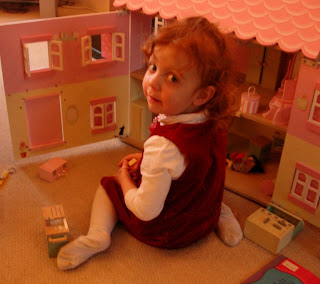 Kate with her new pink dollshouse
Talking of children, the carol ‘Once in Royal David’s City’ sung by a young boy, started off the Carol Service at Phyllis Court on Christmas Eve. It was a last minute decision to go there, so at just before 7 pm I joined friends in the ballroom. Jane and Brian came a little late (as usual) as they were looking after Jane’s father, but the service really set the scene well. Afterwards I stayed on at the Club for a very happy festive dinner with Jack and Norma Babbington and a number of other friends.
On Boxing Day I was quite prepared to dash into Reading in the morning to take advantage of the really low prices offered for flat screen TV’s. (With the imminent demise of analogue transmissions I ‘needed’ a new one for my bedroom). But the thought of battling through the crowds, finding a parking spot, then being told that they had run out of the particular model I wanted (which they had advertised at a very special price), and finally coming out of the shop to discover my car had been clamped, proved just too daunting. I eventually bought one – albeit a bit more expensive – on line. It was delivered yesterday.
So I joined my nephew Tim and his family on a long walk around Twyford and Wargrave. It was a lovely sunny day and gave us a good appetite for the nice Christmas lunch, which followed. Later in the evening we played games on the TV based on various fun tasks (like avoiding being swallowed up in the great big mouth of a lion) where speedy reactions are required 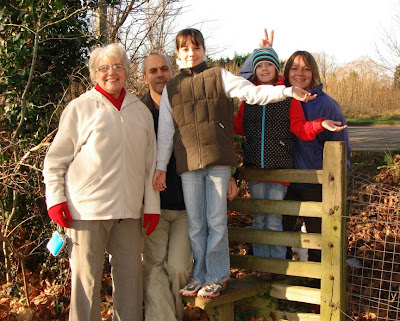 Val, Tim, Charlotte, Ellie and Lynn on our walk 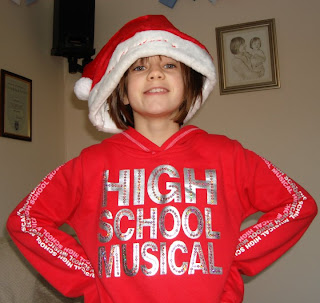 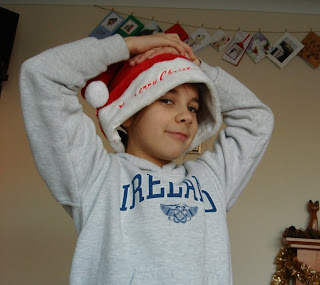 Charlotte
Last night, after a tasty meal at the Chef Peking in Henley with my goddaughter Emma and her mother Felicity, we went to see the film Australia. It’s had mixed reviews, but we all thoroughly enjoyed it. A real epic, it runs for just about three hours. How they filmed some of the scenes of hundreds of cattle racing towards a cliff edge, I’ll never know. The last part of the film, where they showed the Japanese attacking Darwin, was brilliantly staged.

So now it’s New Year’s Eve and I’m probably going to spend it alone, slumped in front of the TV. New Year has never been that important to me, and I don’t like big crowds on New Year’s Eve, so I’ll be quite content – especially as I have something really special to look forward to tomorrow morning.