Walking the streets of London is a tiring exercise! Not that I’m a streetwalker, but on Tuesday I caught the Phyllis Court coach to the capital, mainly to meet up with an old friend from long ago and to finish off my Christmas shopping. Dropped off at Marble Arch I walked the length of Park Lane, then all the way up Piccadilly to the Virgin Megastore and back to Fortnum & Mason where I was to meet Trevor Wayman for lunch. (Trevor worked as our Creative Director in Hong Kong.) At lunch he showed me his latest artistic idea – a large ‘pop-up’ fully illustrated book about Hong Kong. It looks great. Trevor is a romantic soul (aren’t all artists?), a demonstration of which is that every Valentine’s day he presents Laura, his wife, with a special ‘love-box’. He’s been making them ever since they married some thirty years ago.
To give you an idea of the sort of thing he makes, visualise a box of matches with the head of each match carved into a red heart. Beautifully designed, the wording reads ‘Perfectly Matched’. Another one depicts a cardboard cutout model of an elephant. Looking from the front his ears are the shape of large hearts, and the wording reads ‘You’re unforgettable’. One year he made a lovely little wooden jigsaw puzzle in the shape of a heart. The wording this time read ‘Without you my heart would be in pieces’. Another time he made a fully operational lighthouse beaming out the words ‘You light up my life’. They are all so incredibly well made – a true labour of love – I’ve seen about 20 of them - all quite small, but highly innovative. I’ll describe just one more. A lavishly designed heart shape made from plastic has a tiny pump attached to it, which somehow makes the heart move in and out. The wording this time reads ‘You are my heart throb’.
After lunch, before going to Peter Jones and Harrods (where I lounged in front of a 103” plasma television for a while) I spent a while gazing at the Fortnum & Mason wonderful window displays. The best in London, I think 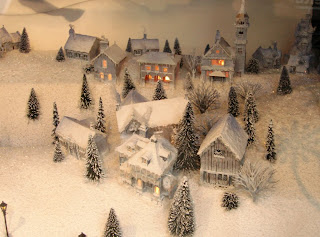 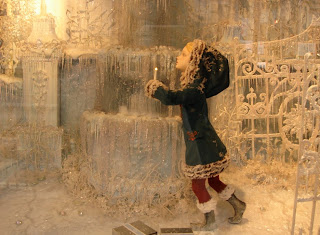 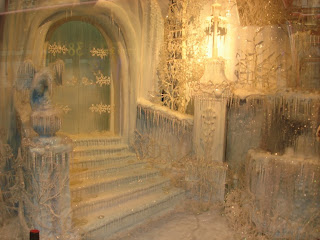 Christmas window displays at Fortnum & Mason
You’ve probably seen those spy movies where the hero retrieves a parcel from a hollow tree or some other hiding place. Well last week, ‘Pootle’ – one of my blog followers - left a comment in which she wondered what had happened to Tim and Mei-Lin. These two were the main romantic characters in my novel ‘Balinese Twilight’ which I’d been serialising for over a year in my previous blog. I explained that as there was a fair amount of semi-autobiographical content in it, I’d decided to completely rewrite the novel, especially as my real autobiography has just been published. (click here). Not having realised that she was such an ardent and faithful ‘follower’ I said Id give her a copy. But as Pootle’s identity is a secret (and will remain a secret) I had to arrange a ‘drop’ somewhere in Henley or thereabouts. Not being able to locate a suitable hollow tree, I finally decided on the reception desk of Phyllis Court. I heard today that the book’s been collected - and no, I wasn’t lurking in the bushes to see who came to collect it. Pootle did tell me that when she identified herself as ‘Pootle’ she was given a few dirty looks!
Tracey and I finished painting the walls of my living room on Monday and then rearranged about 25 pictures on one of them in readiness for my new TV/Blu-Ray set-up. So now, as I wait for the Sky man (already 2 hours late) to arrive, together with the people to install everything, I’d like to share a couple of ‘bon mots' that I read this week, written by Quentin Letts. He was writing about the Home Secretary:
… He did not just land bolshy Jacquie Smith in his net, he removed her fins and scales, filleted her, scraped out her guts and chucked her mermaid tail into the cat’s lunch bowl, accusing her of ‘wilful ignorance’ and ‘smear and spin’. Letts wrote more – and this description I love – ‘Miss Smith tried to stand on her own dignity. It made her nose all pointy and gave her face the blotchy outrage of a slapped buttock.’