Court Dinner with the Apothecaries 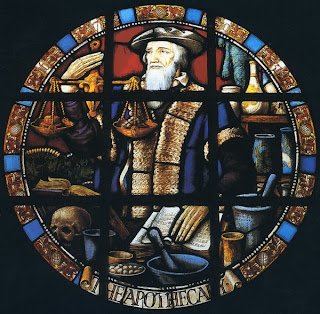 The Stained Glass Window in the Apothecaries' Great Hall

Earlier this year I was lucky enough to be commissioned to paint the official portrait of the retiring Master of The Worshipful Society of Apothecaries, Professor Brian Livesley. This led to me being invited to the Court Dinner at The Apothecaries’ Hall on Wednesday as Brian’s guest.
What a lovely evening it turned out to be. I was one of the very few ordinary people there, as the majority of the fifty or so diners answered to such exalted titles as President of the Royal Pharmaceutical Society, Master Clothworker, Master Stationer, President of the Royal College of Pathologists, Master Coach Maker & Coach Harness Maker, etc. etc. 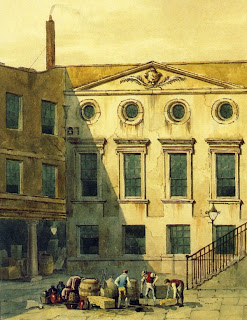 The Apothecaries' Hall in Blackfriars Lane
The Apothecaries’ Hall is in Blackfriars Lane in London, and at about 7pm we all assembled for pre dinner drinks in the Irish Oak Panelled Court Room, full of wonderful portraits of Royalty, Masters and other dignitaries. A unicorn’s horn, a Durer engraving of a rhinoceros (the animal which forms the crest of the Society), and many spectacular carvings and great wooden chests adorned the room. In the adjoining Parlour I was shown the collection of miniature portraits housed in three imposing glass cases. They dated from the 1930’s and depict every Master of the Society. Mine rested comfortably amongst them, being the latest acquisition. 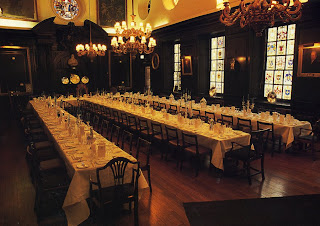 The Great Hall laid out for the formal dinner
Dinner was absolutely superb, and it was a full Christmas fare – served on piping hot plates in the Great Hall (How did they manage that with such a large gathering?) I even found two silver sixpences in my Christmas pudding. (Actually 5 pence pieces) Vintage port, cheese and coffee complemented the witty after dinner speech by the Master. He amused us all by relating a story about a court case where the young lawyer was questioning an eminent pathologist.
“Were you sure the victim was dead?”
“Yes, quite sure.”
“Did you detect a pulse?”
“No.”
“Did he have a temperature?”
“No.
" Was he breathing?”
“No.”
“How could you have been quite sure he was dead?”
“Because his brain was in a jar on my desk …. It probably belonged to a lawyer! 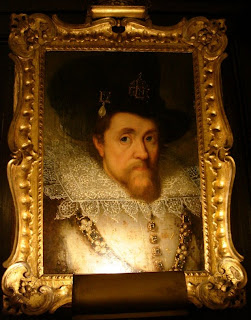 Portrait of James Ist hanging in the Court Room

The Livery Companies of London have such interesting histories. The Worshipful Society of Apothecaries can trace its origins right back to one of the earliest fraternities – The Guild of Pepperers – in about 1180. In 1373 it assumed the title of The Grocers Company. Did you know that the name ‘grocer’ is derived from the fact that its members imported in bulk, that is ‘en-gros’. The Apothecaries’ Charter was sealed in 1617 with King James Ist remarking as he granted the Charter ‘Grocers are but merchants, whereas the business of an apothecary is a mystery (i.e. a craft), wherefore I think it fitting that they be a corporation of themselves’.
(It’s interesting to note that Agatha Christie passed the Apothecaries’ Assistants examination – which explains her familiarity with poisons and drugs she so eloquently used in her detective novels.)
During the Great Fire of London in 1666 much of the Apothecaries’ Hall was destroyed, but part of the walls remained, and were incorporated in the new building undertaken in 1668. During the Second World War twenty of the 36 Livery Halls in London were destroyed and 14 seriously damaged. But the Apothecaries were lucky as an attack on the night of the 11th/12th October 1940; a German 500lb bomb fell on the Hall and penetrated to the basement. The bomb failed to explode as it was fitted with a delayed action device – removed by a brave Royal Engineers officer. The attentiveness of the firewatchers again saved the building when a number of incendiary bombs fell on the Hall. The end result is that Apothecaries’ Hall is now the oldest surviving livery hall in the city. What a privilege it was to be dining in such historic surroundings.

Earlier in the afternoon I joined my friend ‘Bluebells’ who had invited me to tea in the Laduree Tea Rooms in Harrods. She had brought me two lovely Christmas presents which she kindly said she’d post on, as I wasn’t quite sure about the arrangements at the Apothecaries Hall later in the evening. Bluebells lives mainly in San Francisco and is visiting London for a few days on her way to Singapore where she will celebrate Christmas with her family. She is a follower of my blog – hence the enigmatic name – and writes one herself – always full of interest and intellect. Apart from catching up with an exchange of news we touched upon another enigma - our mysterious blogger companion – Pootle! For my part Pootle will always remain a mystery woman. And to misquote one of Winston Churchill’s sayings “Pootle is a riddle, wrapped in a mystery, inside an enigma!” 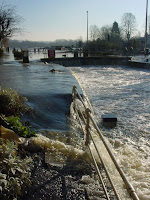 Good news for river users and lockkeepers. The Government has finally given up their ridiculous plan to sell off riverside lock houses and replace the experienced lock keepers with webcams! Six months ago, in an attempt to make money (and to make up for the fine imposed on the Environment Agency by the European Union after the foot and mouth fiasco) the EA announced that resident keepers were no longer needed because ‘telephones and cars made getting around easier’. What nonsense! We riparian dwellers know just what a valuable job the lock keepers do throughout the year in operating the weirs, keeping them free of debris, regulating the flow of boats as they enter the locks, etc, etc. This picture shows Marsh Lock under flood water. How could a webcam help in this sort of situation?
Bring back the Thames Conservancy I say – they knew what they were doing, and managed the river very efficiently.