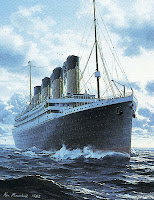 On Monday evening Jilly and I went to our local theatre – The Kenton – to see Titanic -The Musical. Was it a joke? Apparently not. The show won five Toni awards in the USA. We were interested to see how they would stage the show, and of course both knew how it would end! I must say I was very impressed with the sets (over fifteen of them) - more than I was with the music. The sinking of the Titanic has always interested me. I have many books on the subject, watch all the films that regularly appear on Sky, and even painted an exact replica last year of a miniature portrait that survived a day or so underwater before it was finally retrieved from the pocket of one of the unfortunate victims. Until I read the Kenton programme, however, I hadn’t realised that the order given by the helmsman to turn the ship’s rudder to port would be “Starboard Helm” Knowing that the Titanic actually turned to its left (port) in an attempt to avoid the iceberg, I thought that the director of the musical had got her facts wrong. But now I know better. (It wasn’t until the 1930’s that the current international standards were applied, and now, as the helmsman no longer directly controls the tiller, if he turns the wheel to port the ship will go to port.) We had a fish supper at the Rose and Crown – opposite the theatre – just before the show, to echo the nautical occasion.
Sarah Booth is the glamorous and talented daughter of Annie Coury, and on Monday she presented her collection of semi-precious stones, crystal and pearl jewellery, designer bags and gifts, at her mother’s house in Willow Lane. It was a great chance to buy a number of Christmas and Birthday presents. I’ve been to Sarah’s collections before and, as usual, was the ‘token’ man amongst a great many females. With my great niece Becky coming up to her 18th birthday next week and a god-daughter’s birthday approaching rapidly, I elicited the help of a couple of the young glams there, and was given what I’m sure was good advice on styles of jewellery worn by the young today. Seven or eight other purchases added nicely to my Christmas presents now piling up on the dining room table.
Yesterday afternoon Val and I popped over to Wokingham to see my cousin Jill, who’s just come out of hospital after a serious operation. She’s staying with her daughter, Samantha. Jill was full of praise for the John Radcliffe Hospital in Oxford, and especially for the Italian surgeon. 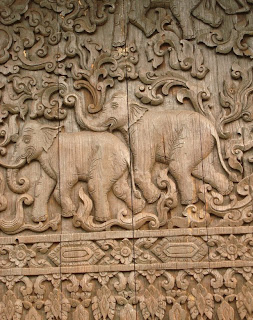 You may wonder why I’m showing a picture of an elephant carving here. Well, I was speaking to my lovely friend, Barbie, in Germany the other day and she commented on how much she liked the Thai carving I’d posted on my blog recently. So this one is a teak carving of ‘cavorting’ elephants adorning the library at the Ancient City in Bangkok. Hope you like it Barbie.