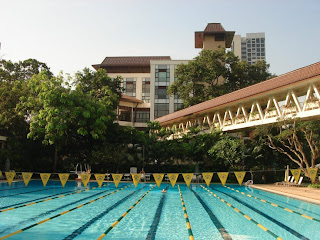 It’s nine o’clock on Tuesday morning. I’ve just had breakfast by the pool at The Tanglin Club in Singapore. The scorching tropical sun is beating down from a clear blue sky, so I think I’ll have a swim to cool off.
I really love this country – it’s my second home. I’ve lived here on three separate occasions, and it’s always great to come back and meet up with my many friends.
Since I was last in Singapore the Tanglin Club has built a brand new five-storey sports centre. It’s joined to the club by the walkway you can see on the right of the photograph above. When I went over there on Sunday afternoon I was amazed to see a full-sized bowling green on the 4th floor. I popped in to the billiards room and had a one-hour’s snooker lesson as no one was there except for the coach 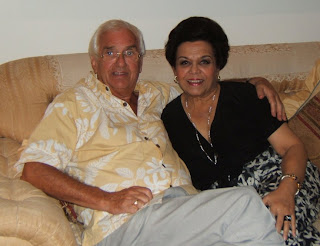 Jayanti and me
Later that evening my old friends Jayanti and Nira had asked me over for dinner at their penthouse apartment in Sunrise Gardens - about 15 miles from the Club. In total contrast to the traffic in Bangkok last week, my taxi speeded along wide boulevards, and I was there in ten minutes 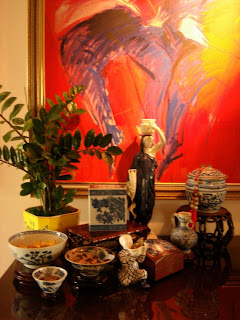 Bowls of Chinese money on Mei's sideboard
Mei Lin Chan invited me to lunch yesterday – I was the only man amongst nine ladies - the youngest of whom had an intriguing name – Nic-Nac! (She could have been in a James Bond film.) Hope I don’t go on too much about food, but there we had Pohpiah – a Singapore delicacy. All sorts of little bowls containing things like bean sprouts, crabmeat, vegetables, shallots, shrimps, etc. are arranged around the table. You then choose what you want, and wrap a large thin pastry around it to make your own individual sort of outsize spring roll. Earlier Tan Siok Sun had joined me for breakfast in the Wheelhouse at the Club where we discussed the arrangements for my book launch on Thursday, and had a brief run-through the presentation – I don‘t want to make any cultural errors.
I paid a quick visit to my tailors to be fitted for a few pairs of trousers, and back in time for Siok Sun to drive me to Mei’s apartment in the city. After lunch she dropped me off at The Raffles Hotel as I had arranged a couple of meetings – one with Liana Wee to discuss my contract and Royalty payments for the painting ‘Raffles Remembered’, and the other with the F&B Manager, Jean-Philippe Joye. We walked along the wide corridors of this historic, and most beautiful, hotel, to the Bar and Billiards Room – the venue for my launch - where we worked out the logistics for Thursday evening.
Another bit of snooker practice and I was ready to take Suzanna Looh to dinner at the Tavern here at the Club. I first met Suzanna in the late 60’s when she was a model in Bangkok. A very clever girl – she’s just written a comprehensive book on the I Ching (the ancient Chinese classic system of cosmology and philosophy.) My leg was playing me up a bit, so I had an early night. 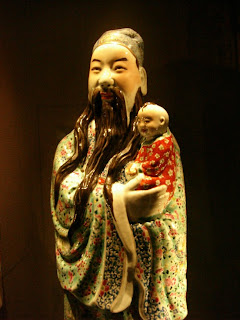 Allan and Jayanti Pathmarajah are both exhibiting the paintings I did of them some 20 years ago at Thursday’s book launch, and as Jayanti was concerned about a strange white mark which had mysteriously appeared on the shoulder of her blue sari, this afternoon we went to a frame maker to rectify the problem and to remount both paintings. The extremely high humidity in Singapore can cause all sorts of damage to both watercolours and oils – and they have one of each. On the way back I called in to the Peranakan Museum – it only opened a couple of months ago. Very interesting. The Peranakans were traders brought to Singapore by the prevailing winds. Some married local women and put down roots here. The lives of their descendants are depicted in ten galleries in the museum and are packed with fascinating collections of every kind – I even spotted the famous golf club belonging to Siok Sun’s father-in-law, Goh Keng Swee. Not only was he Singapore’s Minister of Finance for many years, he also had a habit of scoring numerous ‘holes in one’ in golf.
I’ve mentioned before about my fear of wasps. They are my sworn enemy! I hate them - they were one of the reasons I left England to work abroad all those years ago. Well, when I arrived at Changi airport on Sunday afternoon (what a spectacular, fully carpeted, ultra-efficient airport that is – the best in the world, in my opinion) I popped into the gent’s loo. Painted on each urinal – at no doubt the most strategic position – was a life-size picture of a wasp! Taking careful aim I sort of got my own back – in a virtual way!