It’s my last day in Bangkok, and I’m sitting under the shade of a large green umbrella on the verandah at the Oriental Hotel, looking out to the fast flowing Chao Phraya River. Fluffy white clouds break the skyline as I watch the boats pass by. There’s the many long-tailed boats racing along, brightly-coloured flowers dangling from their prows arching up into the air and spraying ten-foot high waterspouts from the whirring propellers far behind them; plucky little tugs pulling enormous piles of sand, cement and bricks with strong cables, measuring some 50 yards or so; courtesy hotel boats plying backwards and forwards across the wide river; Chinese junks; and even a plethora of jet-skis which has just roared past. All this frantic movement in the open river is in direct contrast to the dozens of water-hyacinth fronds leisurely floating past on their way to the sea.
Earlier this morning I took the Skytrain to the pier, hired a long-tailed boat, enroute to see the Royal Barges in their sheds. As I expected the river was too high for me to get very close to them, but the exhilaration of zooming up the river at breakneck speed was a thrill in itself. 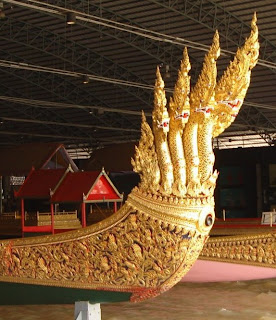 The Royal Barge Anantanagaraj
Only 8 of the 52 barges are on display because of limited space. During Royal Barge processions the King rides in the Royal Barge Suphannahong with its bow shaped like a Royal Swan. Nearly 50 feet long, the crew totals 64, of which 50 are oarsmen and 7 are Royal Regalia bearers. The Royal Barge procession only takes place on very special occasions, and I’ve been lucky enough to witness three of them, the first of which was in 1964 - from the vantage point of the Thai Royal Naval Pavilion. (I was courting the Admiral’s daughter at the time!) To hear the chanting echoing along the river is awe-inspiring. These days all the chanters on the barges are connected to satellites so all the barges can chant in unison. 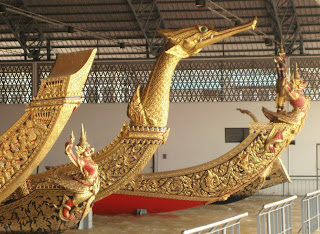 Some of the Royal Barges
As I gaze at the ever-changing river scene before me I’m a little bit wary of an enormous hornet, which keeps buzzing around my table – it’s the size of a golf ball! I think I’ll have lunch now – maybe a nice Thai lobster, or possibly a plate of assorted satay, followed by water chestnut ‘jewels’ in coconut milk - or perhaps a lovely ripe mango. 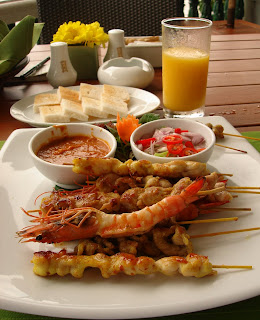 My succulent satay and mango juice

I settled on the satay. Hey, it’s nice to be here at the Oriental Hotel in Bangkok - my favourite hotel in the entire world. 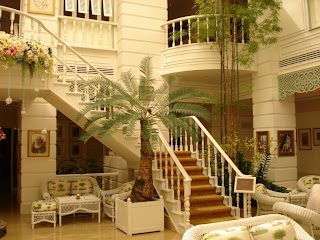 The Authors Lounge at the Oriental Hotel