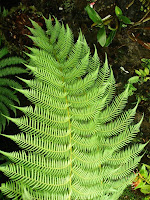 I’d forgotten just how hot it can be in the tropics! Yesterday, after a ‘fish moulie’ lunch at the Singapore Cricket Club with Gill and Jeff Alan, I decided to have a walk around the Botanic Gardens. Originally planted and designed by the great Victorian Botanists, it’s a wonderful place to visit – but not at 2.30 in the afternoon, when the sun is at its fiercest! (Noel Coward was right!) In the Orchid Gardens I found temporary relief by going into what they call a ‘cold area’. Still humid with little waterfalls, at least the temperature is a few degrees cooler 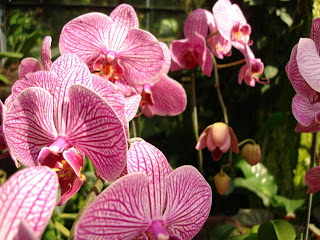 Orchids in the Botanic Gardens
When I lived in Singapore I became the ‘Court Painter’ to the Sultan of Johor, so when his young widow Sultana Nora heard I was in Singapore, she rang today to invite me to lunch at the Istana (Royal Palace) on Sunday. Although we had a nice long chat, I decided not to go. The reason being that taxis are not allowed to go all the way across the causeway to Malaysia. Consequently you have to get to Woodlands in Singapore, then go through Singapore customs, followed by a long (and very hot) walk across to the Malaysian side, go through more customs, then finally find another taxi to take you to the Palace. Sunday also happens to be the busiest day of the week, and the journey would take many hours. She quite understood.
Today has been a very varied day. After breakfast by the pool (rapidly becoming inhabited by little children, it being a Saturday) with Siok Sun, Suzanna collected me and we wandered off to the Lido to see the latest James Bond film ‘Quantum of Solace’. I’ve never been to the cinema in the morning before – It felt quite decadent.
A couple of hours later we ventured down to Bras Basha Road, as I wanted to have a Chinese ‘Chop’ made for my friend. (Eileen had already had his name in Chinese characters designed by her sister.) I needed a big chop with big carving, as my friend is a ‘big’ painter. He’ll use it if he ever paints anything Oriental, I imagine. I should have waited before ordering it because, after a quick lunch, we went to Chinatown where we saw hundreds of chops – all more decorated, and all a lot less expensive than the one I'd ordered! Oh well, I should have listened to Suzanne in the first place. 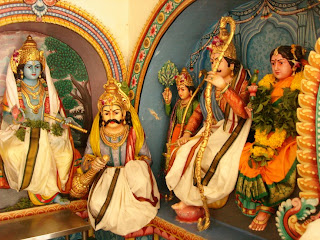 Inside the Sri Mariamman Temple
I love Chinatown – always brimming with bustle, life and colour. Already people are stocking up on items in readiness for the Chinese New Year in February. The ornate Indian temple in Pagoda Street was our first stop, then we just wandered through a maze of little alleys and shops for an hour or so till it became too humid.
Fans on display in Chinatown 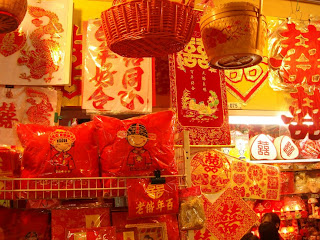 Getting ready for the New Year 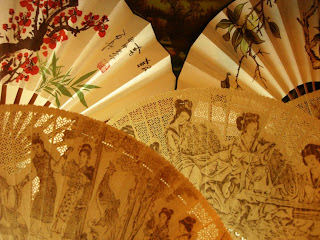 More fans in Chinatown
Where’s the coolest place in Singapore? The National Museum seemed to be the answer this afternoon. It’s recently been completely re-vamped. Housed in a beautiful white colonial building, the history of Singapore is depicted in every conceivable way there. My favourite gallery gives a 180 degree filmshow which graphically brings to life the early Temasek settlers in the 15th century, through the time when lions were thought to inhabit the island (hence the name ‘Singapura’ or Lion City), and right up to the Portuguese, and latterly British colonists, ending with a very complete collection of galleries depicting the last 50 years of fantastic progress.
So, after all that activity we had a quiet cup of tea in the Tanglin Club. After Suzanna left, I walked down to the Far East Plaza, as my tailor’s daughter wanted to buy a couple of my books. In an hour or so I’ll have a quiet dinner on my own downstairs in the Tavern, then post this blog.
Oh yes, I’ve just had an email from the USA – It seems I’ve won first prize for the Best Watercolour Painting in the forthcoming Miniature Art Society of Florida’s annual exhibition. It’s for a miniature I recently did of Peter Sutherland in his Upper Thames Rowing Club blazer, so he’ll be pleased.