The Ride of the Valkyries

Last night an old friend, Barry Cable – the Director of Communications at the United Nations here – invited me to dinner at The Ship – an English Pub, situated next to the colourful Soi Cowboy in downtown Bangkok, and owned by his wife, Dtoy. (They serve the best sausage and mash in Bangkok.) The Ship is a haven of peace surrounded by girlie bars, and last night, being Halloween, an assortment of highly coloured and costumed revellers running all over the place. 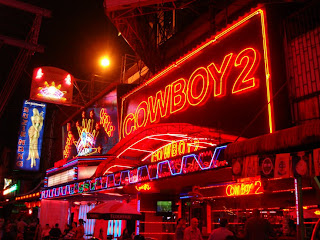 Looking down Soi Cowboy
When I left, at about 10.30, the heavens had literally opened. The thunder and lightning was deafening, and the monsoon rain bucketed down as only tropical rain can. Be outside for one second and you are literally drenched! After a while a taxi pulled towards the pavement, leaving a three-foot stretch of water in the road for me to negotiate. As it was obviously well over 8 inches deep I didn’t really want to ruin my shoes, so with a mighty leap I dived headlong into the taxi – throwing my camera in first. Having survived that feat of daring, I settled back and discovered I’d luckily chosen a jolly taxi-driver – I think his day-job was that of a crazy long-tailed boat driver - and we roared off around the sois (lanes) in the unbelievable storm. In places the water covered the road to a depth of about 2 feet. How we didn’t stall, heaven only knows. But with the thunderstorm crashing all around us, and cars and trucks slithering about all over the place, about an hour or so later we finally reached home. Pakdi was waiting with a welcome umbrella as I did a hop, skip and jump over the floods at the entrance to the house. (Too late to worry about the shoes.) My kamikaze driver really deserved the big tip I gave him. When you are driving through floods it’s impossible to see the potholes, so my ride was more like being in an aeroplane during violent bouts of turbulence.

The large garden here in Bangkok where I’m sitting right now has about six houses dotted around it - all owned by various family members. Next door to Oye and Maurice lives Khunying Nit - she is Oye’s sister-in-law. Sadly, Chaiwat, her husband, passed away in June. However, being a close confidant and advisor to Queen Sirikit, upon his death, intricate, large and beautiful floral tributes were sent to the house by many members of the Royal family – from King Bhumipol Adulaej downwards. They remain in the house, as does his white and gold coffin. (It is not uncommon for the deceased to be kept for more than 100 days before cremation.) I’ll post a photograph of the tribute sent by Princess Maha Chakri Sirindhorn – the King’s daughter. (She’s the same Princess I presented two miniatures I’d painted of her at the Chitralada Palace not too long ago.) The flowers are made of pure silk, and Nit showed us around the room yesterday where every fortnight a number of monks arrive and perform funeral rites leading up to the actual cremation - which will take place in December.