Luckily I don’t suffer from jet-lag - mainly because whichever country I happen to land in I keep to that country’s time, and don’t try to make up on sleep. My flight from Bangkok took 13 hours, so I read a book and watched the little aircraft on the screen in front of me creep very slowly across the world. (The bloke in the seat next to me, however, watched 6 full-length films one after another during the journey.) 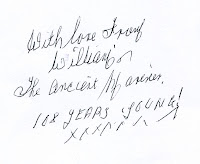 Got back just in time on Tuesday evening to see Rolf Harris on BBC Television trace his father’s footsteps across the battlefields of World War One. And very emotional it was too. As it was the 90th anniversary of the end of the war, being the eleventh day of the eleventh month, the late news was showing the scene from the Cenotaph in London that day. To think there are only three survivors of the Great War still alive today. And the amazing thing is that all three services were represented. Henry Allingham, 112, served as an air force mechanic, Harry Patch, 110, was a ‘Tommy’ in the army, and William Stone, the youngest at 108, was a stoker in the navy.
I’ve known William for many years. His mind is as alert as ever, and even his handwriting is still good. He always ends his letters with the words ‘The Ancient Mariner’ as you can see from the card (above) he sent to me a couple of weeks ago. What a privilege to know such a man. William went to Dunkirk five times to rescue our troops from the beaches and ferry them back to Dover, and then went on to join the Russian convoys – a highly dangerous occupation. 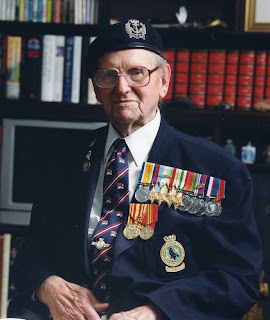 William Stone - The Ancient Mariner
Now it’s back to reality – I have a portrait commission to complete by next Monday, but at least I’ve finished all my Christmas cards. Bought 300 stamps yesterday and wrote them all today, having printed and addressed the cards before I went away.