Sitting in the Sunshine 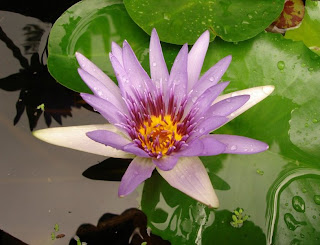 The sun is shining – in fact it’s scorching! I managed half-an-hour this morning sitting in the garden, but that was enough. The blue lily in its ornate snake-dragon pot slowly opened its petals as the sun shone down..
Maurice is home from hospital – with a shadow close beside him. Lek, his full-time nurse goes everywhere he goes (yes, even there!)
She’ll be with him for a week, but he’s rapidly getting back to his old self. Today, while Oye and Lek took him for physiotherapy at the hospital, I boarded the Bangkok Sky Train to go into the city. I love the Sky Train – the air-conditioning is icy cold and the trains arrive every 3 minutes. When in Thailand it’s important to adhere to the Thai traditions and customs. For example today I suddenly realised as I sat down on my seat that I’d crossed one leg over the other, and my foot was pointing directly at the person opposite. This is extremely impolite, and I quickly put both feet back on the floor.
I met my old friend Robin Dannhorn in the ‘Food Loft’ on the top floor of the Central Department Store. This up-market food hall serves food from every corner of the world. You wander round the hall and choose what you want from the country of your choice, then five or ten minutes later your meal is brought to the table. Robin and I were colleagues in Bangkok in the sixties when he was our Public Relations Director. Then he was responsible for the PR for Thai Airways International. Robin and his wife Maren now live in France, but they keep a small apartment here, as they visit frequently. Robin still writes travel brochures and other publications for the airline. It’s always good to meet old expatriate friends and reminisce about times long ago – especially someone like Robin, as we’ve shared many adventures and bizarre experiences – both side-splitting and hair-raising - in the past.

We had a look round the store after lunch where I was drawn to the coloured pencil and pens counter. – I just love the colours.