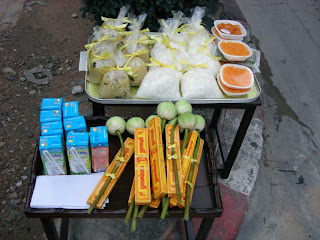 I had to be up and about by 5.30 am this morning in order to feed nine monks. Not only is it my birthday today, it is the day that I complete my sixth cycle of life – an extremely auspicious date in the Thai calendar, so I’m told. A great variety of food was prepared earlier by Pakdi and Oye
– rice, fruit and curry, together with candles, incense, money, and lotus flowers.
Leaving home at 6 am we parked the car near to the busy Sukhumvit road. Pakdi set out two little teak tables by the side of the road and arranged all the goodies on them while we waited for the saffron-robed monks to come along. After leaving the nearby Wat (temple) they slowly approached us in single file along the pavement. Each time a monk reached us he opened his bowl and I placed one each of the gifts inside, taking care to put the lotus flowers and envelopes of money on top. I then put my hands together and wai’d while they said a short prayer. The traffic roared past a few inches away from us but was of no concern to the monks. Maurice took a few photographs – I’ll add one or two here. 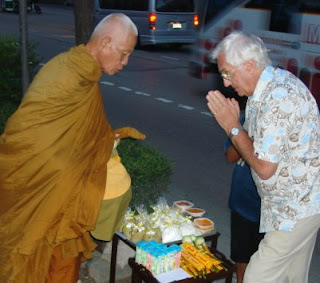 We came home to a hearty breakfast and I opened some of the cards and presents I’d brought with me from England.

Yesterday evening was spent with old friends, Julian and Eileen Deeley. They live in Bangkok – Eileen is an expert on Chinese culture – in fact she is leading an expedition to China this coming Sunday. We had arranged to meet at the Polo Club for dinner, and Robin Dannhorn was to join us too. Luckily I was able to use the driver, as the traffic was particularly horrible yesterday. Robin – an old hand – was there when I arrived, but Julian rang to say that they were stuck in a two hour traffic jam. A couple of brandy and gingers later, the Deeleys finally joined us in the bar.

When you see films where the hero arrives at Bangkok Airport, jumps into a car and drives into and around the city, don’t believe it. There’s no way a visitor could ever negotiate the traffic here - it’s unbelievable, No one ever gives way – it’s every man for himself. I would get completely lost – and I lived here for seven years! Nevertheless we had a really good evening – old friends are good friends. Eileen gave me a book published only yesterday in which she was involved – it’s by HRH Princess Galyani Vadhana, the King’s sister, and is the story of their mother's life. Next week Bangkok will hold an elaborate State Funeral for the Princess who died last year.