My friend Diane Sutherland invited me to a prize giving afternoon last Sunday. The occasion was the inauguration of the Peter Sutherland Medal. Diane's late husband Peter was the founder and president of the Upper Thames Rowing Club. When I arrived at Bird Place I was surprised to see only two cars parked in front of the house so I parked between them. And as I walked around to the garden I noticed that one of the cars (a very fast looking beast) had its engine running and was facing outwards. I soon realised who it belonged to when I joined the spectators assembled in the garden. Theresa May, the Prime Minister, was giving a speech prior to handing out the medal. The car must have belonged to one of her bodyguards, and ready to move at a moments notice. 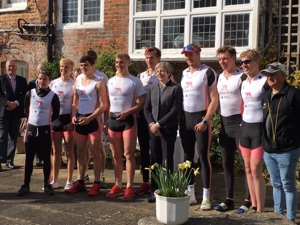 This the medal. Leander Club won the race, beating Upper Thames by half a length. 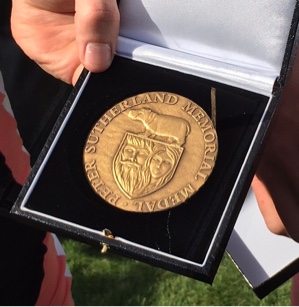 And here is Diane talking to the Prime Minister. 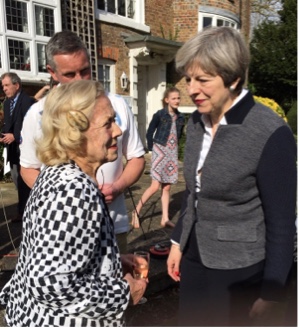 The weather was absolutely gorgeous and Theresa May's speech so interesting - she knew Peter well.

My my boat has finally arrived. My young friend and I have now had four trips on it in the last ten days. Luckily the sunshine has been very kind to us.

Here it is moored at a friend's house 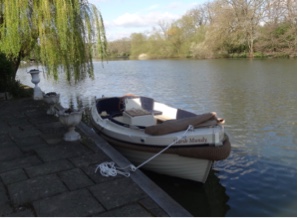 We are both very pleased with the new Marsh Mundy. It's so easy to steer, moor and handle. Last Saturday we took it up to Phyllis Court. At the visitors mooring there was just enough room to glide it between the two boats moored there - about 12 inches either end. Another lovely day so we sat on the verandah and had lunch. I bought a Phyllis Court burgee to fit to the bow when I've made a little mast for it.
On we went up to Hambleden and back where we moored near Temple Island. 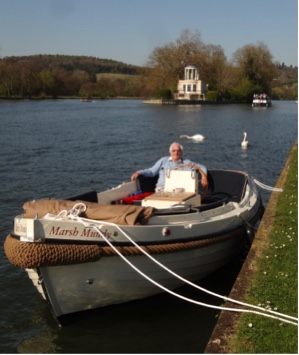 There's a very interesting exhibition being held in London later in the spring. It's called the Ruth Borchard Self Portrait Prize. 3 or 4 years ago I made this small self portrait which is my reflection in a silver cup. Then coupled it up with one I painted in 1974 while I was living in Singapore. So as a double self-portrait I'll be entering the small paintings in the exhibition. 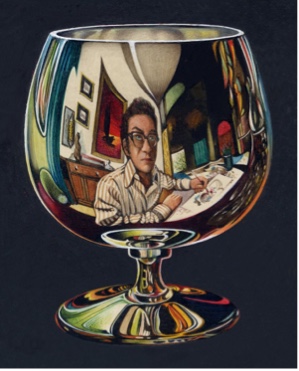 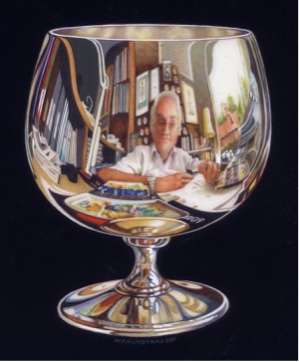 I've entitled it 'Then and Now'. Wish me luck.
All the paintings I've been working on lately - from a series of miniatures of children for a top London jeweller to a couple of large oil portraits for an Indian family can't really be shown on my blog unless they give me permission. Right now I'm painting a large oil of a friend of mine against a background of a country cottage scene.

Last Sunday we spent the day working on my young friend's garden. She did most of the work - I did what I could. We are disappointed with the current state of the lawn as it looks quite threadbare. After tough digging holes with a special tool to aeriate it we completely covered the lawn with lawn soil, then sprinkled seed all over it before giving it a good rake and water. Hope the birds or squirrels don't eat too many seeds.

My physio, Victoria, managed to get sight of the x-ray taken of my hip the other day. (It takes weeks to make an appointment with my doctor these days so he won't see the x-ray till next Thursday - the earlies I can see him). Because of the way I've been walking while my left knee recovers from the operation, the right hip has taken a lot of the strain. But apart from that the x-ray shows that I have advanced and severe osteoarthritis in that hip. It may be possible to have a steroid injection to temporarily relieve the pain but this will depend on my doctor. There's no way I'm going to let this spoil our summer or our little holiday in June so I expect I'll have to have a hip replacement in late autumn.

I had some sad news the other day. Jayanti, one of my oldest friends from my early Singapore days suddenly died of a massive heart attack. We'd only been talking on WhatsApp ten days ago. I met Jay in 1960 when she joined my studio in the advertising agency for artistic experience - and on her very first day she spilled a pot of paint all over me! When I moved to Hong Kong in 1964 I lived with her family for about six months when her father was the manager of Air India. We've always met when I visited Singapore over the years. Here are two pictures - the first at a fancy dress party in the sixties. The second taken about ten years ago. 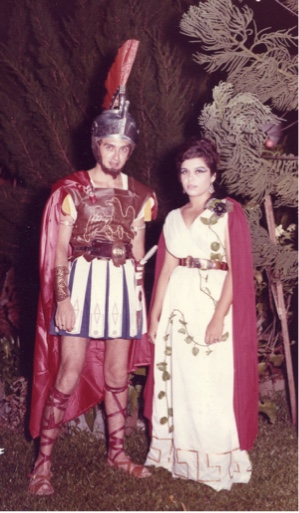 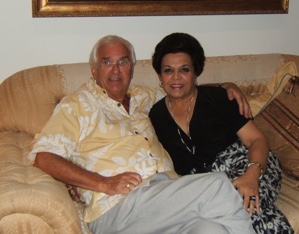